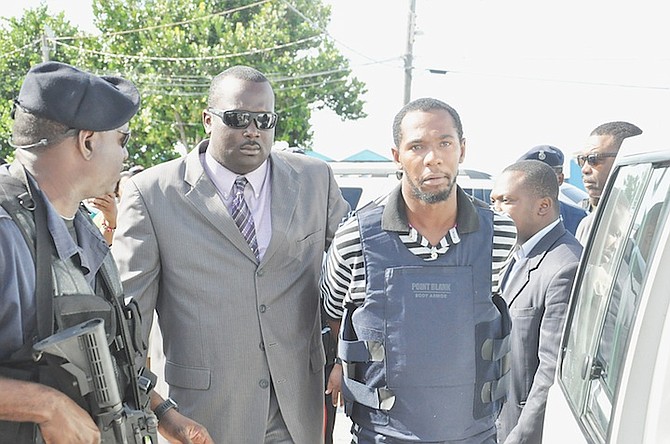 Kevin Dames, the fifth person to be charged in connection with killing Barry and Sheena Johnson in Grand Bahama, is arraigned in court. Photo: Vandyke Hepburn

A 26-year-old Holmes Rock man was arraigned on charges of armed robbery and murder in the Eight Mile Rock Magistrate’s Court yesterday.

Dames was brought to the courthouse around 10.30am under heavy police guard. Like the other four, he was wearing a bulletproof vest.

A small number of people were seated inside the courtroom during the arraignment. A woman believed to be a relative of the victim was visibly overwhelmed by grief on Dames’ arrival in court.

As Dames stood in the prisoner’s dock, Magistrate Gwen Claude read the charges against him. He was not represented by counsel.

It is alleged that on September 12 at Deadman’s Reef, Dames being concerned with others, was armed with an offensive instrument, namely a handgun, rifle, and shotgun and robbed the victims of a set of keys and a GMC Truck, valued at $8,006.

It is also alleged that on the same date and place, while being concerned with others, Dames murdered the victims. The Johnsons were found shot dead in their home earlier this month.

Dames was not required to enter a plea to the charges. Prosecutor Supt Wendell Deveaux objected to bail. He said that the matter could be adjourned to December 3, when the four others who were previously charged are expected to appear for trial in the Supreme Court.

Dames was denied bail and remanded to the Department of Correctional Services in New Providence.

A small crowd gathered outside the courthouse to get a glimpse of Dames as he was quickly escorted into a police van and taken to Freeport.