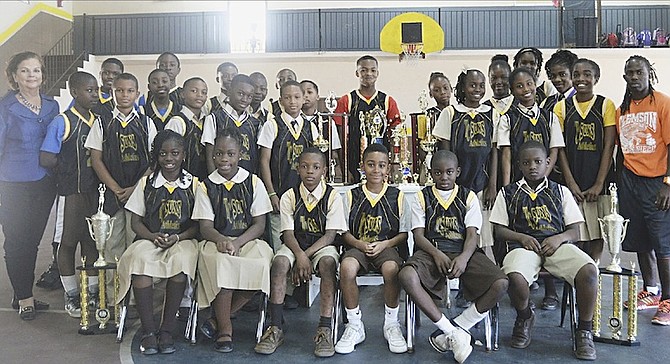 For the past 15 years, Nekeno ‘Keno’ Demeritte has been building a formidable sporting programme with the Temple Christian Academy Suns in basketball and track and field.

Year after year, the Suns boys’ and girls’ basketball teams have been wracking up the championship victories and have been increasing their trophy case at the Collins Avenue campus. This year was no exception with both teams securing six of the seven finals they competed in, while their mini team got a title, was a runner-up and a third place finisher in their three tournaments.

While the mini team only lost three games, the boys lost one game for a win-loss record of 30-1 and the girls suffered two losses as they finished 20-2.

“They had lots of successes, both the female team and the male team,” she said. “I’m very proud of both teams.”

Burrows, however, had to put a lot of their success in the hands of coach Demeritte.

“Coach Demeritte has a deep passion for these young people,” she said. “He’s remarkable and the children respect him and most of the time, I think they perform for him. I’m just looking for more success from him and the team. We’re all about excellence and achieving the very best through sports.”

The Suns boys’ team started the year off winning their own Temple Christian Academy Tournament in October. They fell short of adding the title in the Cybots Thanksgiving Tournament in November, but they regrouped and captured the Bahamas Scholastics Christmas title in December, the Freedom Academy in January, the Moon McPhee/Cecil Thompson in Grand Bahama in February before capping the year off with both the Bahamas Scholastics Association and the Kevin Johnson Providence Boys Tournament in March.

Out of their those tournaments, the Suns celebrated as Gabriel Murphy and Denika Lightbourne were crowed most valuable players on the girls side and Theon Missick and Justin Burrows emerged as the MVPs for the boys.

For Lightbuorne, it was a pleasure for her to be a part of the team for the first time.

“I think we made some great passes to get the score. We needed to practice our defense,” said Lightbourne, who won her MVP title in Grand Bahama. “It felt good. This was my first year, so I was proud of myself.”

Lightbourne, an 11-year-old sixth grader, said they couldn’t have done it without coach Demeritte.

“He works us hard,” she stated. “He pushes us to do good. He really helps us along.”

Gabriel Murphy, back on the team for her final year, admitted that they played much better than last year.

“We won a lot of tournaments, but I still think we have a lot to improve on,” she declared. “I played well in the first half of the season, but I fallen off, so I need to practice harder and put more hours in.”

Murphy, another 11-year-old sixth grader, was the MVP of the Temple Christian Academy Tournament.

“It was exciting, but you still have to remember in everything to stay humble,” she stressed.

Missick indicated that they had an excellent season.

“In the Cybots Tournament, we were missing three or four of our guys so that tournament wasn’t as good as wanted it. So it was rough,” Missick said. “But in Freeport, it was good. The first three games and the last two were hard at times because we were hogging the ball for ourselves. But we had to play like a team to win.”

Missick’s performance enabled him to secure the MVP in both the Bahamas Scholastics and the Moon McPhee/Cecil Thompson Tournaments.

“It was good,” said the 11-year-old sixth grader of his effort in his second time on the time.

Burrows, the 11-year-old sixth grader, said they performed as expected.

“We performed good in all of our tournaments, especially our first tournament because that was the first time that they played in a tournament and they played very good,” Burrows said. “I think we had a good team.”

In the Temple Christian Academy Tournament, Burrows was named the MVP.

“I was excited because it was my first time winning a MVP,” he summed up.

Burrows also credits coach Demeritte because “he works us hard in practice every Monday, Wednesday and Friday. He works us hard. Sometimes he will bring the team from QC (Queen’s College) to help us get better.”

As for coach Demeritte, Murphy said “he works us hard, but because he wants us to be the best and he doesn’t do it to get out there and get fame, but because some of us might want to play basketball in the future. So he does it so we can have the best training and discipline.”

Demeritte, who sometimes could be mistaken for his players because of his midget height, said this was one of the best year that he’s had at Temple Christian for a long time.

“This season, we have three teams and every team played to the best of their abilities,” he said. “The mini team was more of a developmental team so that we can look at what we have to work with in the future. So I was very pleased with what they accomplished.

“The bulk of the boys team are second year players. We had people like Justin Burrows and Theon Missick, who carried the team from start to finish. Thanks to those guys, that is why we came out with the victories and the amount of tournaments that we won this year. It was an exceptional job by them.”

On the girls side, Demeritte said Lightbourne stepped in this year and m,ade a world of a difference.

“I can’t say enough about her. This girl performed as if she was playing for years and this was just her first year on the team,” Demeritte said. “She basically carried the team. She was the heart and the soul of thew team. Without her, I don’t think we would have done as well as we did.”

In the past, Demeritte said he’s had teams that performed just as remarkable, but there was something special that he experienced this year.

“There was the unity and the togetherness,” he said. “These guys had a heart and a willingness to win. I think that was the difference compared to the teams that we had in the past. With work, we can get better. With the developmental team that we had, we’ve seen some players like Danielle McCoy in the girls. She’s going to be something to reckon with the future.They played with the boys and she out-shined the boys.

“So for the next 3-4 years, we will have one of the teams to reckon with in the primary schools division.”

Come August 2, Demeritte said they will be going back to the drawing board when they will bring in their rookies to blend with their returning players as they prepare for the new season.

“It’s going to be a work in progress, but I can guarantee that we will be there again,” he projected. “We are going to be one of the schools to reckon with in the future.”

And just as they dominated the scene this year, Demeritte said they are looking for an encore.