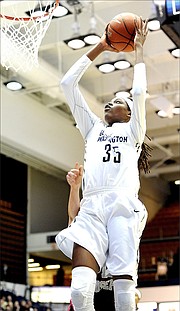 Jones is one of 12 prospects scheduled to attend the event, which will take place at Mohegan Sun Arena in Uncasville, Connecticut. ESPN2 will televise the first round beginning at 7pm and ESPNU will air coverage of the second and third rounds starting at 8pm. In addition, the draft will be available through the WatchESPN app.

Jones will become the sixth player in GW women’s basketball history chosen in the WNBA Draft and first since Jessica Adair was taken 34th overall by the Phoenix Mercury in 2009.

Jones, who is projected to be a top-8 pick by several draft prognosticators, is in line to become the programme’s first-ever first round selection. Ugo Oha is currently the highest Colonial ever drafted, as she was taken 26th overall by the Connecticut Sun in 2004. Other former Colonials chosen in the WNBA Draft include Tajama Abraham Ngongba in 1997 (31st overall, Sacramento Monarchs), Cathy Joens in 2004 (30th overall, New York Liberty) and Kimberly Beck in 2008 (36th overall, Seattle Storm).

The Seattle Storm holds the top pick in the draft for the second consecutive season. The San Antonio Stars will choose second, followed by two selections from the Connecticut Sun. The fifth pick belongs to the Dallas Wings, while the Los Angeles Sparks will pick sixth.

The Washington Mystics, who play their home games at Verizon Center, just two miles from GW’s Foggy Bottom campus, hold the seventh overall pick, followed by the Phoenix Mercury at No. 8 and the Indiana Fever at No. 9. The Chicago Sky (10th), Atlanta Dream (11th) and New York Liberty (12th) round out the first round.

Despite missing the final 10 games of the regular season, Jones was named honourable mention All-American for the second year in a row. The Freeport, Bahamas, native led the nation in rebounding (14.6 rpg) and ranked fourth in the Atlantic 10 in scoring (16.2 ppg) and second in blocked shots (3.3 bpg). The only player in the conference to average a double-double for the third straight season, she registered 18 double-doubles in 23 games played in finished her career with 54 in 84 games.

The 6-foot-6 forward finished her career ranking third all-time at GW in rebounds (961), fourth in scoring (15.4 ppg) and fifth in blocked shots. Including her time at Clemson as a freshman, Jones topped both the 1,000-point and 1,000-rebound marks, tallying 1,249 and 1,041, respectively. She also owns GW’s single-game and single-season rebounding records and boasts a pair of 20-point/20-rebound efforts.

Following the draft, Jones will begin training camp in preparation for the WNBA’s 20th season, which begins on May 14.

The draft, hosted by Mohegan Sun Arena for the third year in a row, is open to the public. Fans will be admitted with the donation of a canned food item at the door, which will benefit the New London Community Meal Center.

WNBA.com will provide complete draft-day coverage and serve as the web destination for fans who want to track the top college seniors in advance of the draft.