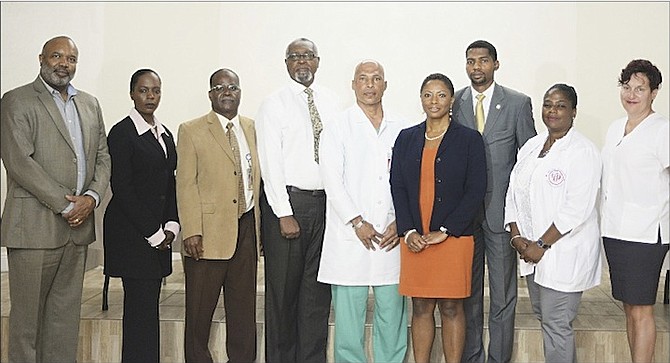 UNITED Healthcare Reform Alliance (UHRA), a coalition effort by nine of the nation’s leading medical, allied health and insurance groups, yesterday rejected the government’s proposed NHI model, insisting that no support would be given until the plan is adequately revised.

During a news conference to launch the group’s new platform and agenda, officials castigated the National Health Insurance (NHI) proposal calling it unfeasible, flawed and unsustainable as presently configured.

The group further claimed that the draft legislation governing NHI was developed without input from local stakeholders, despite all efforts by the group to aid the government in its planning.

He said the group remains committed to ensuring that universal healthcare (UHC) is done right and has committed itself to providing the government with an alternative plan for realising “practical, sustainable and meaningful” UHC in The Bahamas.

“It is time to move away from unworkable proposals that may look good in theory, but spell disaster in practical terms,” he added.

President of the Consultant Physicians Staff Association (CPSA) Dr Locksley Munroe said his members are most concerned with proposals of how the Christie administration intends to fund NHI once implemented.

“If you were to roll out National Health Insurance at this moment that covers everything, you have not registered anyone, you have not collected any funds, but yet you are saying you are going to pay for everything,” he staid.

In January, the government increased efforts to register people for the new National Insurance Board (NIB) smart card, which will be used to identify those who are eligible for NHI.

Until NHI legislation is passed in Parliament, however, NIB cannot share this information with the NHI Secretariat for enrolment.

“The bits and pieces need to be in place and it should not be stopped,” Dr Munroe added. “They need to continue the registration. They should find out how we are going to fund National Health Insurance because I don’t think any of us know exactly how it is going to be done. They need to collect those funds and then in a timely manner, determine what benefits they are going to put to the general public.”

Dr Munroe said the government has opted to look beyond financial obligations associated with NHI in an effort to get the public on board.

He called on the government to be more transparent in its process to introduce NHI, asserting that the government’s “beautiful” public relations campaign has misled the public into believing that NHI would offer “extensive coverage for free.”

Beyond its funding issues, the government’s NHI plan has come under fire for its “confusing” approach towards primary health coverage and its placement in the overall scheme.

Dr Dr Carnille Farquharson, vice president of the Bahamas Association of Primary Care Physicians (BAPCP), told reporters that her members – a group she defined as personnel on the frontlines – haven’t identified any significant improvements in facilities where primary health coverage would be administered.

“We know these patients. We know the culture, we have travelled throughout the islands, we know the conditions of these public healthcare systems that we all work in at some point or another - the community clinics. We know all of the deficiencies, the inefficiencies in the management and administration; the lack of supplies, the lack of equipment,” she said.

According to Dr Farquharson, her group has worked to make the government aware of these issues for some time. However, she said, the Christie administration decided to push the concept without correcting many of the shortfalls.

In late March, Health Minister Dr Perry Gomez told reporters that the primary healthcare phase of NHI which was due to come on stream this month, would be delayed by “around six months or so.”

Government consultant Mark Britnell, of KPMG, has said the process would take months, adding that a public health insurer must be established before primary healthcare services could be offered through NHI.

Dr Farquharson said despite these facts now being public knowledge, the government still hasn’t yet displayed a willingness to make the necessary improvements.

“And, quite frankly, four months, six months - if you have seen the state of some of those clinics, especially in the Family Islands - you know very well that (primary healthcare) isn’t going to happen,” she added.

Emmanuel Komolafe, chairman of the Bahamas Insurance Association (BIA), said stakeholders want to help the government meet its objective of making the Bahamas the healthiest nation in the Caribbean region by the year 2030. However, he said this feat can only be achieved if all sides work together in an environment that promotes “mutual respect and professionalism.”

However, to date the group said it had not drafted any alternatives to the government’s NHI proposal.

The doctors and the insurance companies working together. that is very interesting.,