Another Fire As Smoke Rises From Vechicle Site Near Landfill 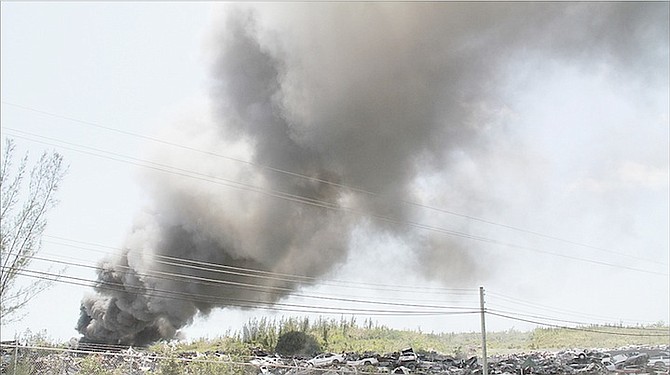 A number of old vehicles burn at a derelict site near the landfill. Photo: Tim Clarke/Tribune Staff

A MASSIVE fire at a derelict vehicle site near the Harold Road Landfill yesterday prompted Tall Pines MP Leslie Miller to beg the Christie administration to “arrest” the problem of recurrent fires in the area “once and for all”.

The fire was not at the much-derided landfill, but on a property to the east of the dump.

Mr Miller also called on the government to “do the right thing” and ban the export of copper from this country, as he reasoned yesterday’s blaze was likely to have been started by individuals seeking to obtain copper from the derelict cars.

There were three fires at the landfill in March.

According to Fire Chief Superintendent Walter Evans, officials received information of a fire at the derelict vehicle site shortly after noon yesterday. He said when officials arrived at the scene, they had to quickly implement a strategy to ensure that the fire did not spread to the other nearby vehicles, which he said numbered in the thousands, as well as the nearby landfill.

When The Tribune arrived on the scene, large plumes of thick, black smoke could be seen billowing from the site. Loud explosions could also be heard emanating from the site, which Mr Evans later explained were due to the eruption of various “tanks”.

However, officials managed to control the blaze shortly before 3pm. Nonetheless, Supt Evans said firefighters would continue to ensure that all of the “hot spots” have been cooled down and that the area is “well saturated” with water to ensure that the fire does not spread.

Supt Evans could not say what caused the blaze, however.

Speaking with reporters at the site, Mr Miller called for the government to do whatever it takes to remedy fires on or near the city dump.

“First of all, those vehicles have gasoline in them, some have diesel, some have probably old batteries in them, and some of them have tyres on them,” Mr Miller said. “So this is an accident waiting to happen. This is a disaster saying ‘come and get me, come and get me.’

“I just implore the government, the minister to please arrest this problem once and for all man. Please take the burdens off the backs of my constituents and off the backs of the Bahamian people in general.”

He added: “This is only the start of the summer. It ain’t May yet man. This is only April. Consider us going through this for the rest of the summer until August or September. It is not fair. So I’m begging the minister, please, whatever remedies you have to implement, please get it implemented to take the burdens off the backs of the Bahamian people.

“I’m begging you, please, sir, on behalf of all of them, and not only my constituents but Bahamians everywhere who live in Nassau.”

Mr Miller also believes the fire was probably started by persons seeking to obtain copper or scrap metal from the wreckage, and after the fire caught onto the rubber insulating some of the copper wiring, caused the blaze to “go out of control”.

“But the government has to arrest this programme once and for all,” he added. “I said the last time I was here, you need to have security guards mandated to come and man these dumps. In the United States of America, Canada and any civilised country they have security at their dumps. People like mischief, people like to light fires.

“…I’m asking the government again man, do the right thing, ban the exportation of copper because we are the only country in this hemisphere that allows copper to be exported. It must stop and it must stop now.”

The Soldier Road vehicle site that was supposed to be closed down after the last large fire is full to capacity with old cars again. Tribune, go see, take photos and do some investigative reporting up in this place!!!!!

the tribune should investigate who has the management contract for the scrap yard. and after the comments by Mr. Miller in this article, demanding attention to the situation by his party, I think all Bahamians look forward to see him and his thousands of Tall Pines constituents who have suffered this for years, protesting en masse with all of the "light skinned" people and others at the next demonstration. someone make sure to tell him about it since he doesn't seem to read the paper or follow social media and was unaware 1) that the dump "situation" was still going on and 2) the group RABL was holding a silent protest at the IDB conference demanding improvements at the very same dump!

Yes please someone please inform the Tall Pine MP that not only black skinned people would be demonstrating a protest next time such actions be required to get the attention of the government but them light skinned people is also going to be there from wherever they came from, and please don't allow him to go sleep again next time the topic arises of constituents be protesting for the government to be concern about thier health.