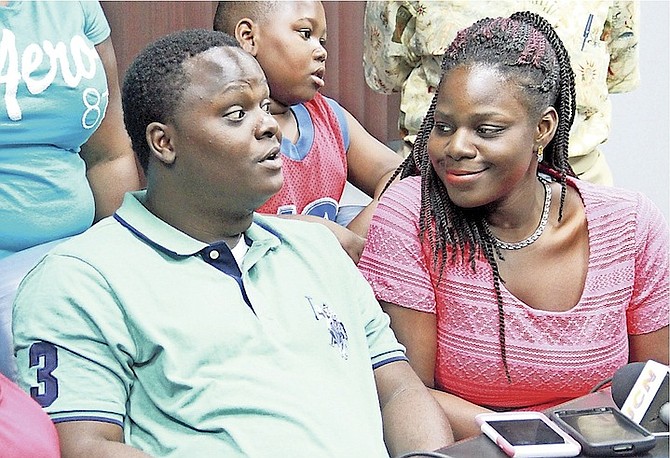 Tameko Bethel pictured sharing a laugh with his fiancee Dwanesha Dean as he spoke about how his life has been transformed after surgery to remove a massive tumour from his neck. See page three for the full story.  Photo: Tim Clarke/Tribune Staff

ONE month after a massive tumour was successfully removed from his neck, a “grateful” Tameko Bethel said words “can’t even express” living life tumour-free.

Mr Bethel, 24, said he has gained a “brighter” outlook on his life since he underwent surgery on March 16, adding that the tumour’s removal has allowed him to get his “life back on track”.

At a press conference yesterday at Bahamas Welding and Fire (BWF), a jubilant Mr Bethel sought to inform the lead doctor in the surgery, consultant neurosurgeon Dr Magnus Ekedede, as well as the Bahamian public that he is “alive and well” and that “everything was a success”.

Mr Bethel previously suffered from a left lateral neck tumour, which had become life threatening, causing him to suffer nosebleeds and blackouts. He had also experienced difficulty breathing and swallowing, according to reports.

His family had for years searched for a physician/physicians that could offer professional medical assistance, but with no success.

Earlier this year, however, Mr Bethel met Dr Ekedede for the first time, who, after realising Mr Bethel’s condition and financial situation, promised to “talk to some friends” and that they would see what could be done.

Dr Ekedede made good on his promise by assembling a team of physicians at Princess Margaret Hospital, including Dr James Johnson, an ear nose and throat specialist and Dr Hans McLelland, a Canadian surgeon and carotid specialist. About 10 surgeons, the anesthesia team at PMH, along with other nursing and support staff assisted in the surgery to remove the tumour, which took roughly three and a half hours.

Mr Bethel has said that the surgery, if conducted in the US, would cost some $2m. However, Dr Ekedede and the other physicians performed the operation free of charge.

One month and a few stitches later, Mr Bethel expressed optimism over what he called a “life changing process”.

“My confidence level [is] just a little bit more higher than it actually was,” Mr Bethel said yesterday. “And I actually look forward to life more brighter than I actually did. I still was doubting in my mind that anything could happen at anytime with that, knowing that it had to be taken care of.

“I can’t even express how I feel now that I don’t have that, where I’ve had it so long.”

Mr Bethel also used the opportunity to thank Dr Ekedede and all of the physicians and medical staff who assisted in making the surgery a success.

“He truly worked hard with my case,” he said of Dr Ekedede. “From he took this on, he stuck by my side and he told me he will make sure I live my life and get my life back on track. And here I am today.

“...I just want to say I’m grateful for the bond that me and him have, an excellent, great doctor, and I just want to extend my gratitude to him and tell him thank you for a job well done. He and his team, and everybody who worked hand in hand with him, just to say thank you again.”

“When I look at Tameko today, Tameko is like a brand new person,” she added. “Because for so many years I’ve seen him with that growth on his neck, and it was like a never ending road.

“…And here today Tameko is a living testimony that truly there is a God and God is real, and he’s still in the miracle working business, because Tameko has his life back.”

Mr Bethel said the inside of his neck is still a bit sore from surgery, but he expects the soreness to go away within a month.