‘More Than 50’ Transgender Individuals In The Bahamas 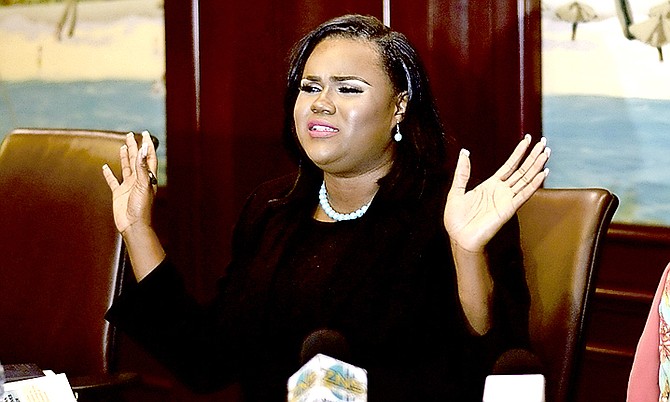 Alexus D’marco, director of The D’Marco Foundation, at the recent press conference held by the transgender and intersex community. Photo: Shawn Hanna/Tribune Staff

THERE are more than 50 transgender male, female and youth living in the Bahamas, according Bahamas Transgender Intersex United spokesperson Alexus D’Marco.

In an interview broadcast on the 96.9 FM radio show “The Revolution” with host Juan McCartney, the self-proclaimed “first lady” of the LGBT community said the purpose of Bahamas Transgender Intersex United (BTIU) speaking up now has “nothing” to do with the upcoming gender equality referendum.

In fact, Ms D’Marco said the government made it clear that the referendum has nothing to do with gay marriage and the group is not yet advocating for that right.

She said she does not believe she has hurt the referendum by advocating for equal rights for transgender Bahamians because “Bahamians are going to do what they are going to do”.

“Students are being thrown out of school because they are identifying as transgender,” she said yesterday.

“We just want to bring to light the issues. It has been made clear that the referendum is not for gay marriage, it is about discrimination across the board. If you are going to talk about equality, we have to deal with the whole issue of equality.

During a press conference at the Hilton, BTIU representatives called on the Christie administration to ensure that the fundamental rights of all genders of Bahamians - male, female and transgender - are protected. However, the group stressed that it is not trying to shift the focus of the gender equality referendum.

The group is calling for equal access to healthcare, education and employment without discrimination.

50 into 300,000 equates to LESS THAN 0.02% of the population. Now, obviously that number is bigger if you lump in the full LGBT community, but still, the numbers in the bigger picture are so minuscule, we shouldn't even be arguing the fact and should get on with making everyone equal.

Don't be so easily fooled. The 50 will quickly turn into a much much greater number and we will have thousands of foreigners coming to our shores unless Bahamians vote a resounding "NO!" on June 7th to all four of the proposed amendments.

Any foreigner would have to be deranged to want to immigrate to this benighted country. Why on earth would they want to live in a place full of homophobic and xenophobic bigots.

Sir Lynden Pinding International Airport is open. They can leave or not come!

That less than 1% of people are what the PLP are fighting for to get their "equal rights" ......

Why should the vast majority be legally subjected to what is mainstream considered as immoral, deviant, lifestyle behaviors?

Why is government wasting the peoples time, money and energy on a referendum nobody called for, while ignoring the electorates decades old call for a referendum on Article 7, which is the biggest elephant in the room and very real threat to national security?