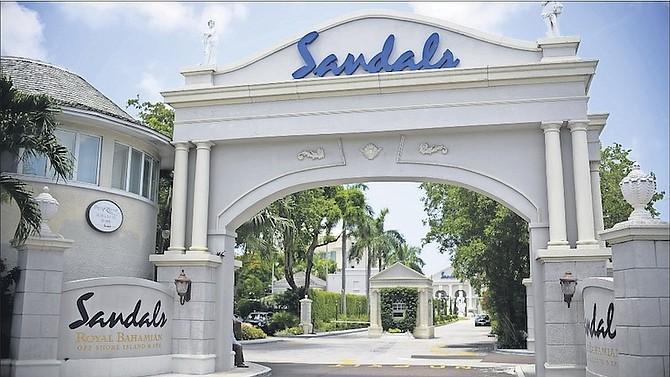 TRADE Union Congress (TUC) president Obie Ferguson has accused Sandals Royal Bahamian of the “highest level of union busting”, blasting the the resort for its imminent abrupt closure, which he said was almost treasonous to the Bahamian people.

Mr Ferguson told Tribune Business that the TUC was “very surprised” at the Sandals closure notice and suggested that it may be connected to an ongoing dispute with the bargaining unit for the all-inclusive Cable Beach resort’s 500 plus employees.

“Obviously we were very surprised that the company decided to do what they did,” he said. “This is undermining, this is skulduggery, this is really almost treason on the Bahamian people that we have a corporate citizen in this country to which the government has extended all kind of incentives to do something like this.”

Senior executives at the Sandals Royal Bahamian resort have remained tight-lipped over the purported closure of the all-inclusive Cable Beach resort in less than two weeks. It is understood to be closing its doors on August 15 with plans to re-open on October 13.

In a letter from Gary Sadler, Unique Vacations’ senior vice-president of sales which was seen by Tribune Business, the resort blamed “circumstances” beyond its control for the pending closure and offered affected guests a chance to re-book their stays with any of the resort chain’s properties throughout the Caribbean.

The letter read: “We appreciate your patience as we work through this challenging time. We have instituted a streamlined and efficient course of action for these guests who may be affected and are extending all of our call centre resources to you.”

Mr Ferguson said: “The workers decide to exercise their constitutional rights. Now all of a sudden Sandals is telling their guests that they can go to other destinations while offering them all kind of incentives so that they don’t come to the Bahamas. Now they can be in a position where the occupancy of the hotel would reduce to an unacceptable level. Now they can go to the government and say the occupancy has dropped and we now have to make some workers redundant. That to me is the highest level of union busting and the government of the Bahamas ought to intervene and make sure that the constitutional rights of the workers are adhered to. The union is very upset. The workers are under siege. This company is undermining the entire Bahamas by doing what it is doing.”

Labour Director Robert Farquharson said on Wednesday his office had been made aware of the potential closure through the media but could not confirm validity of such reports. His indication was that labour matters connected to the resort were still being addressed by his department, and at no point were he or his subsidiaries notified of a potential closure.

The Tribune understands that no employee at the resort has been notified of the closure and “all scheduled to work have reported”.

For much of the last month, members of the BHMAWU have used media outlets to express their dissatisfaction with the resort for not recognising it as the official union body in negotiations between workers and the resort. As part of the group’s most recent demonstration, heavy-duty trucks and buses were parked in along the West Bay Street thoroughfare next to the Sandals property, leading to the arrest of several people.

Long Island MP Loretta Butler-Turner called on the government to immediately address the issue. “The impending closure of Sandals Royal Bahamian Resort at Cable Beach for two months beginning in 12 days is of great concern,” she said in a statement on Wednesday.

“The resort employs approximately 400 line staff and under 100 managers. This is a significant staff complement in a tourism economy already reeling from high unemployment and stagnant growth.”

She questioned the lengthy time frame of the closure, the level of salary and benefits workers will receive and whether affected individuals will be entitled to National Insurance Board unemployment benefits.

“Will all of the line staff and workers be assured of employment when the resort reopens?” she asked. “It should be noted that it has often been a practice in the hotel industry to let go staff after the temporary closure of a hotel or resort. When were senior government officials aware of the closure? According to press reports the Director of Labour appeared to be caught off guard by the closure. The scant notice to workers of a mere 12 days is also of concern.”

Welcome to the real world. They do it in all countries. The Bahamas has a reputation for low productivity and labour problems.

For multinational companies, If there is low productivity or labour is a problem then close down and go where labour is not a problem.

Your comments are always so UBP.

I don't know what the UBP would have said so I can't answer that. What I do know is what is going on in the rest of the world.

Explain the reality of the multi-national for me then, maybe you can show me what I said is wrong.

hard to argue this point, the union protested heavily due to working conditions. So all the Hotel has to do is claim that they are closing to address those issues. This is unfortunate

these union people think only they have cards to play.. if u try to tell the man how to run his business and what level of operating expenses and profit should be adequate, expect pushback. Sarkis is lucky in this respect, the govt and Chinese got him before the union.. maybe a blessing in disguise..

The "All inclusive" model does very little for the Bahamian economy beyond the gates. This is a similar model to the cruise ship deal, except on the cruise ship they charge for drinks (all drinks) and at least then passengers come ashore for a meal and shopping. There is no incentive for Sandals guests to spend money beyond the gates. No incentive to leave the property. The "All inclusive" model should be revisited in the best interest of ALL bahamians. Not just the bulk suppliers.

That's not correct. When we went here the first time to the Melia - which offers all inclusive as well we went dining to quite a few restaurants - Graycliff, The Island House, Mahogany. The point is to deliver a better quality and experience than the Hotels All-Inclusive Food.

buddy you could tell from ya restaurants you got money to spend.... most da tourists don't come loaded like you

If tourists were forced to go to restaurants instead of buying an all-inclusive package, tourism would fall off so dramatically that stop-over visitors would be limited to the luxury class and there would be further job reductions. Bahamian vacations would simply be too expensive and too much money for too little value.

As it is, because of unionisation, the labour costs are very much higher than other destinations. This wouldn't be an issue if the productivity were commensurate with the higher wages, but it is not. And as mentioned above, labour issues, disruptions and actions in the face of low worker productivity is a serious impediment to profits -- and that is the sole reason that resorts are in business -- to create profits. They don't care about creating jobs if those jobs don't bring a profit with them.

When guys like Obie says phrases like "treasonous to the Bahamian People" , it is gravy-sucking pigs like him who is treasonous to Bahamians. He makes a very much better living off the backs of working Bahamians than the union members, and he and others like him are in a large part, responsible for the decline of tourism.

Recently did an all inclusive and it was cheaper to pack a warmer and grocery shop.

What's the law against retaliation?

Ahh the favored Communistic clause "treasonous to the Bahamian People" or as Fweddy Mitch likes to say an "attack on the sovereignty" a crock of crap - the unions are the reason nothing happens because no foreign investor wants to have to pay the outrageous prices you have to just to "deal" with these crooked fools. All the unions do is drive the price up and keep the quality low. Really non of the union leaders care they esp[ecially down here as they all see the leadership positions as their next step to joining the PLP and getting paid more for doing nothing like our ministers....

No one wants to see jobs lost, but didn't the union say the place was mold and rat infested? I hope the hotel is closing to address those concerns and it's not a permanent closure to avoid the vexing issue of the unions.

Hubert Ingraham sold these failing government-owned hotels to Yardies ............ now that the profits are dwindling, it will be 1992 all over again