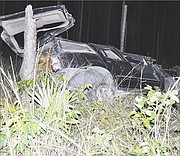 The scene of a crashed car in Grand Bahama last year. A survey has been carried out into the driving habits of motorists on the island, showing some alarming results. Photo: Vandyke Hepburn

SINCE the installation of several new radar speed monitors in Freeport, city officials have been able to gather some “alarming” but important information concerning the speed habits of motorists in Grand Bahama.

They have learned that motorists travel at “a high rate of speed” between 8pm and 3am in Freeport, when most serious and fatal accidents occur. There have been six traffic fatalities already this year on Grand Bahama streets.

Troy McIntosh, City Manager at the Grand Bahama Port Authority, said the speed monitors acquired by the company have been installed at five locations on East Sunrise Highway to promote road safety and reduce the number of accidents.

“Since we installed them, it has been quite alarming to what we have seen from information gathered from the units,’ he said. “Motorists are speeding - no surprise - but a lot of the high rate of speed is happening after hours between 8pm and late as 2am and 3am in the morning.”

Mr McIntosh said the information gathered from the speed monitors will help police with their road safety strategy. “So, the monitors have been very positive in that regard,” he added.

Mr McIntosh said the Port Authority, along with its partners at the Grand Bahama Road Safety Committee and Traffic Police, hopes with the help of the monitors to achieve a 30 per cent drop in the number of road accidents in three years.

When drivers travel above the speed limit, the monitors alert them with a flashing amber warning to “slow down”. He noted that two of every three drivers do not look at the speedometer when driving.

ASP Kenwood Taylor, officer in charge of Traffic Division, has warned that the number of traffic fatalities is too high compared to last year. Mr McIntosh noted that around 1,100 accidents were recorded on the streets last year.

“We want to look over a three-year period, and we want to reduce those numbers and I think one way to do that is to have drivers more aware and conscious of what speeds they are traveling at,” he said. He noted that the speed monitors were placed in areas where they want motorists to be especially cautious and obey the speed limit.

Mr McIntosh stressed that another issue that concerns them is distracted drivers. “We noticed a lot of distracted drivers who are on their cell phones or doing other things in the motor vehicle. Cell phone usage is increasing more and more and those numbers we don’t know,” he said.

With the opening of the new school year approaching, the city manager said that the limits on the monitors will be adjusted to 15mph during the school drop off between 8am and 9am, and after-school pick up between 3pm and 4pm. He noted that police will also be out during those times enforcing the speed limit in those areas as well.

What are the "alarming" speed rates clocked by the machines thus far? How does one publish a story under such a headline, but the actual substance thereof is missing?

It sounds that this is the case for the whole Bahamas not just Freeport!