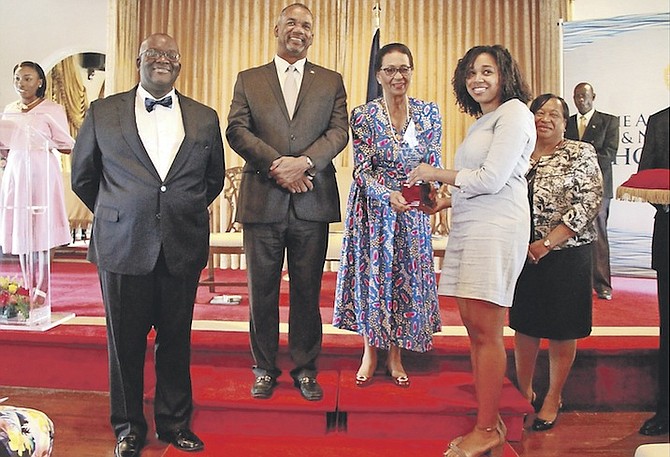 OVER 20 high school graduates were yesterday awarded as winners of the All Bahamas Merit and National Merit Scholarship Award, something Education Minister Jerome Fitzgerald called a positive step towards the “development of our nation” by the country’s “bright, young leaders of tomorrow.”

At an awards ceremony at Government House yesterday afternoon, 21 graduates from four islands throughout the archipelago - New Providence, Grand Bahama, Eleuthera and Long Island - were honoured as National Merit Scholars, each for having maintained consistent academic performance and no less than a 3.0 grade point average (GPA) while in school.

Simone Cambridge, a graduate of Queen’s College, is this year’s All Bahamas Merit Scholar, taking home a scholarship worth up to $140,000 for four years of study at McGill University in Canada. Ms Cambridge finished high school with a cumulative GPA of 3.82. She sat 12 BGCSE’s in the 11th grade at one sitting and earned 10 As, one B and one C.

The 22 students have taken more than 175 BGCSE examinations collectively, according to Mr Fitzgerald. Three, he said, have received nine or more As and five have received SAT scores of 2,000 and higher. He also said that the group has been awarded close to 200 BGCSE A grades.

For their achievements, the 21 National Merit Scholars have been awarded scholarships of up to $25,000 per annum.

In his message to the 22 scholarship recipients, Mr Fitzgerald called on the winners to capitalise on the opportunity and to “do their best work” to be able to “make a contribution to our country when you are completed with your studies.”

“There is no doubt that you will do well in your future endeavours,” he said. “Know that your country believes in you; we believe in spending the resources to develop each and every one of you and we hope that you in turn come back and help to create a stronger and more modern nation.”

“You all are expected to serve as ambassadors for the Bahamas,” he added. “You will be expected to contribute to the overall development of the country by applying your services, your talents and your knowledge to improving the lives of Bahamians. We are depending on your aptitude, ingenuity and innovation to usher the Bahamas into new realms and to venture into careers that will revolutionise our country in the years ahead.”

Ms Cambridge, the 2016 All Bahamas Merit Scholar, said of her accomplishment: “I was overjoyed that I was approved to receive such a great (award). After my excitement and happiness, of course, came relief and immense gratitude. I realised that I was being awarded not only for my hard work, but also for the effort that everyone has invested in me.”

The Bahamas All Merit Scholarship Programme began in 1993 through a collaboration between the Lyford Cay Foundations, the Central Bank of the Bahamas, and the Ministry of Education, Science and Technology, according to officials.

According to Mr Fitzgerald, the All Bahamas Merit and National Merit Scholarship Award is the most prestigious scholarship awarded in the Bahamas, being valued at $35,000 per annum for up to five years, and is tenable at local accredited universities or colleges or accredited institutions in the Caribbean, United States, the United Kingdom and Canada.

How many of these 21 "high achievers" will return to contribute to this miserable country???