Bishop: Killing Pregnant Woman Should Be A Double Murder 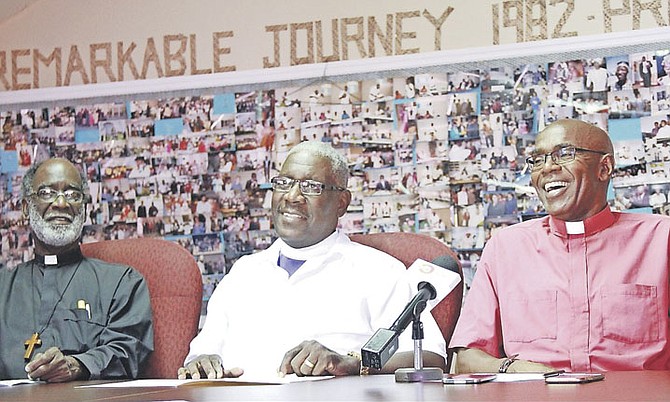 BISHOP Simeon Hall yesterday called on parliamentarians to enact legislation that would allow persons guilty of killing pregnant women to be charged with double murder.

Bishop Hall, pastor emeritus of New Covenant Baptist Church, said any assailant who kills a pregnant woman is “guilty of the death of two human beings and should be tried as such.”

Bishop Hall also commended Police Commissioner Ellison Greenslade and the Royal Bahamas Police Force for the part they played in the country recording no murders for the month of July.

Bishop Hall made his statements during a press conference at his church on East West Highway yesterday morning. He was joined and supported by Anglican Archdeacon James Palacious and retired Methodist minister Reverend Charles Lewis.

Bishop Hall was referring to the recent sentencing of two men for their roles in the fatal shooting five years ago that claimed three lives, including a pregnant woman due to give birth to her son.

Shawn Knowles, 43, and Timothy Saunders, 36, were both sentenced to 18 years in prison for the July 30, 2011 shooting deaths of Chackara Rahming, Erica Ward, who was eight months pregnant at the time, and Edward Braynen. Knowles’ 18-year sentence was reduced to 17 after receiving credit for time spent on remand awaiting trial.

Saunders was also sentenced to 18 years for the killings and his sentence reduced to 14 for his four years spent on remand prior to trial.

“We call on parliamentarians to extend the reach of the laws they make to children (still) in the womb,” Bishop Hall said yesterday. “Any assailant who kills a pregnant woman is - in our opinion - guilty of the death of two human beings and should be tried as such.”

He added: “Part of our Judeo-Christian orientation is that life begins at conception. I understand that there is some legal debate that the child is a human being after it is born. Well, we have serious problems with that as Christian believers.

“As a country we tend to copy mostly the bad things from America. But in America the person who causes the death of a woman pregnant with child - where the child dies - that assailant is charged with double murder. We should copy that one.”

Bishop Hall also commended Commissioner Greenslade and the RBPF for “their ongoing effort to put a serious dent in major crimes,” which he said was evident in there being no murders recorded in July.

“The bad that happens amongst us must not overshadow the good we try to make,” Bishop Hall said. “During the month of July, there were no murders, and that seemed to have just passed by. We’ve become so used to murder that when we don’t have one we are a little surprised. Now it’s up to the politicians who try to politicise crime. That’s their business.

“Our business is to shine the light on the progress and good that we make. We believe that the police are deserving of the community’s support, particularly as it relates to the community’s participation in working with the police. The only reason crime soars and goes unabated, in most cases, is because we harbour criminals.”

Abortion is murder under Bahamian law punishable by 10 years in prison, so it stands to reason that the law considers an unborn child, regardless of the term, to be a human being with the same right to life as the rest of us.

our abortion laws are stupid. Depending on whoa argues it the clause "Whoever intentionally and unlawfully causes abortion or miscarriage shall be liable to imprisonment for ten years." can mean even if you leave the country for it and come back you may still be liable. Abortion should be legal, but this is a christian nation where 70% of kids are born outside of wedlock and rape, child sexual abuse and homosexuality runs wild. We are so absurd with our conservative stupidity it's mind boggling

What can you call our brand of "conservative Protestant religion"???? ....... what can you compare it to in other parts of the world????? ....... Is it more like Arabic Wahabism or sub-Saharan neo-Christian fundamentaism???

we're in line with the US Bible belt. Wahhabism is another bag of garbage that does nothing other than serving as the piffle ideology of islamic extremists and fundamentalists that run Saudi/Taliban/Boko Haram etc. Just like the US bible belt we tend to vote against our own interests in belief of some pie in the sky, as we get pandered to. What would you call our brand of fundamentalism?

That's a pretty ignorant hasty generalization on a very complex issue. Also, in some aspect we do behave similarly, especially our conservative values. But I can already see where this conversation has left the terminal of rationality already. So I shall discontinue this pointless conversation. Good day to you sir/madam