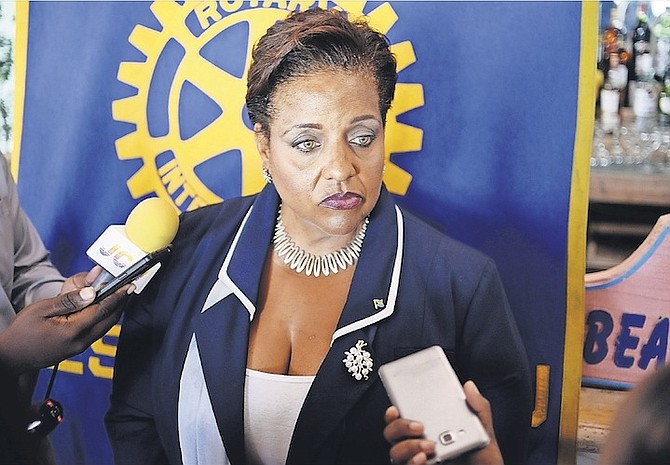 LONG Island MP Loretta Butler-Turner yesterday dismissed concerns over potential challengers to her bid to be re-elected in that constituency. She said that she will retain her Long Island seat in the upcoming general election.

She also spoke about her controversial actions of quitting the Free National Movement’s (FNM) leadership race on July 29, hours before delegates were set to vote in the convention.

She told reporters that if she gets “forgiveness” for that from her supporters, she would have no regrets.

Addressing questions surrounding several issues facing the Free National Movement (FNM), Mrs Butler-Turner put forward her strongest response to questions on her candidacy for Long Island, telling reporters that the attention being shown to the island by potential challengers makes her a “good opponent.”

Her comments came days former Bamboo Town MP Tennyson Wells said the FNM would lose the Long Island seat in the 2017 general election if it presents Mrs Butler-Turner as its 2017 candidate in the constituency.

Mr Wells has also pledged to fund the campaign of an independent nominee or run in the area himself as a last resort if Mrs Butler-Turner receives the nod.

He also revealed that a potential candidate being circulated within the FNM was lawyer and Tribune columnist Adrian Gibson, who, he said, he would not have any difficulty supporting.

In addition to Mr Wells and Mr Gibson, current Fort Charlotte MP Dr Andre Rollins has also been rumoured to be interested in an independent bid for Long Island come 2017.

In the wake of the FNM’s recent convention, Dr Rollins has announced that he will not be seeking a nomination from the party.

Despite all the internal friction within the FNM, the party’s senior leadership has come out in support of Mrs Butler-Turner, with both the party’s chairman and leader saying they expect her to be the standard-bearer for the constituency.

Mrs Butler-Turner, who was addressing the media following her speech during a monthly meeting of the Rotary Club of West Nassau, also promoted her party’s “unity” policy.

The Long Island MP said while she is still seeking forgiveness by some within the FNM for the “errors” in her actions during the party’s recent convention, she is focused on making her party the best choice for the electorate.

“I think I have been forgiven. I probably have a few other people that need to forgive me, but I have no regrets,” Mrs Butler-Turner said about quitting the leadership race.

“I think if I get forgiveness for that, there will never be regrets.”

“I believe that the philosophies of the FNM, which I have always believed in, certainly still closely align with me and I am just hoping that as we move forward we present that unity that you asked (about),” she told reporters.

Mrs Butler-Turner added: “I think it’s time now for Bahamians to truly have the option that they have begged me to give them and that is, they asked me to make sure that I no longer divide the party. And so on that, I believe that we deserve no less than a strong democracy and I believe that as we move forward, we in the FNM have to prove that we can in fact come together and offer that very real hope for Bahamian people.”

“I think as we mature as a nation it’s important just as my speech I gave today, that we just not knock what is wrong with our country, but that we are able to offer very real, viable options and policy choices that can grow our country.

“We are stagnated. I spoke to you today about the economic crisis and I also gave the flip side, the economic opportunity. I believe that the PLP government, where they have us now is truly in a very dark place economically, socially and otherwise. It is incumbent on us, the FNM, and I am working with my party to ensure that a lot of the platforms that I have promoted are certainly considered by the party.”

Mrs Butler-Turner said the FNM is working diligently to improve itself.

“We’re working and that is what I need to do. I have to do some work, we all need to do some work; we’re working. We’re going to make sure that the Bahamian people are able to have the opportunity to exercise real democracy. The PLP is the worst government this country has ever seen; we need to rid ourselves of them,” she said.

well if people can vote for the failed plps mps, she should go sliding in for her help to long island after the hurricane. Where was the PLP?

She used that as a good PR exercise ala the PLP

Regardless 3 years, 9 months ago

Comrades, if the granddaughter of the late great honourable Milo does knows anything about her late grandfather's politics, is when it's that time to forgo her apology tour cause the rules of when you're political toast rules reigns supreme against her chances of a nomination for Long Island as Minnis prepares 'his team' as the Red Movement party awaits the rungin sounds the 2017 General's bell.
What the public has gotten to see is her lack of leadership abilities put on public display that many have warned about but some were in denial of acknowledging.
What part is there about Loretta's nasty, backstabbing, always blaming others for her now gone public leadership deficiencies of which you're still refusing to understand?
If her attempt at the party's dealership was not a basket case of embarrassing errors, please tell me, and her own loyal supporters why you think so many have so wrongly read Loretta's tea leaves?

You could run a goat in LI as an FNM and it would win... So if LBT retains her seat, it won't be saying much other than that's goat politics...

She will win with all the "faults" Tals so readily post for us. . .IT IS BACAUSE THE PEOPLE ARE "SOOOOOOOOOOOOOOO ITCHING READY" TOO PUT THIS GOVERNMENT OUT OF OUR PROBLEMS!!

Comrades! Granted, Long Island has more than it's share goats. Loretta is no 'goatherdess.'