Minnis: Bahamians Must Not Lose Out On Baha Mar 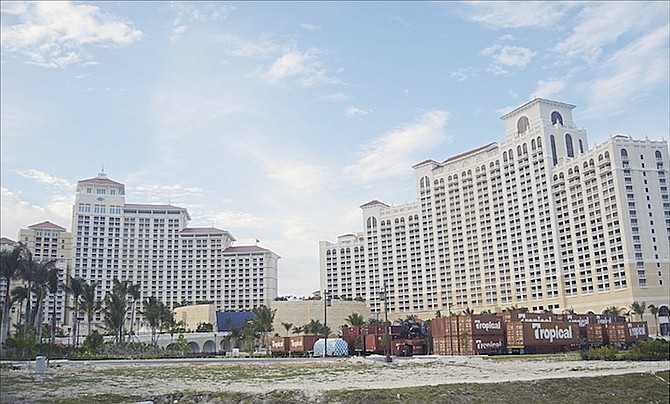 FREE National Movement Leader Dr Hubert Minnis yesterday renewed his warning to future Baha Mar investors not to engage in any negotiations with the Christie-led government that would disadvantage Bahamians.

Dr Minnis dug his heels into the party’s well-worn official position on the speculative negotiations to complete the shuttered $3.5bn Cable Beach property, but would not go so far as to say that he would seek to renegotiate a dissatisfactory deal if elected to government.

His comments come on the heels of revelations from an economic impact report of the resort obtained by The Tribune, which projected the government has lost an estimated $315m in tax revenue because of its opening delays and the court appointed receivership process.

“Whatever negotiations the government is in with the Chinese or whoever, they must take the Bahamian people into consideration and not use it as a political ploy to win points in the election,” he said. “Bahamians must be first, they must always remember that.

“The Bahamians who worked on that project, we will not negotiate for them to take less than what was supposed to be paid, no bending or negotiations on the people’s money.”

Dr Minnis referred to the proposal by developer Sarkis Izmirlian, in which he outlined plans to have Bahamian contractors complete the project.

“We are putting the Christie government on warning, any sale of that hotel, Bahamians will complete the project. All monies owed to Bahamian contractors will be paid in full, we will not compromise with that.”

When asked whether his government would renegotiate if the deal did not meet these terms, Dr Minnis said: “The FNM after becoming the government, whatever he (Christie) does, the investor will know in advance. (Christie) better not negotiate any inferior deal. We are sending a warning to investors, Bahamians will come first, we will not compromise.”

Baha Mar was initially expected to open in December 2014 but has been delayed several times since then, something Baha Mar officials have blamed on its general contractor China Construction of America.

The Supreme Court placed the property into receivership last October at the request of the Export-Import (EXIM) Bank of China.

The economic impact report noted that more than 2,000 direct jobs were lost in 2015 due to the resort being placed into provisional liquidation and later receivership, adding that “the employment impact from (the) project once completed and fully operational (is) uncertain given slower ramp up resulting from delays and reputational damage.”

According to the document, the resort was expected to create more than 9,000 jobs, with 3,000 being direct employment at the property.

The study also revealed that an estimated 800,000 stop over visitors have been lost due to the resort’s opening delays, with each visitor expected to spend $576 a day.

Reacting to the report on Sunday, FNM Senator and former Attorney General Carl Bethel said the party would push for a Commission of Inquiry into Baha Mar if it wins the next election. Mr Bethel said a large-scale investigation into the resort’s implosion is needed to “name and shame” those responsible.