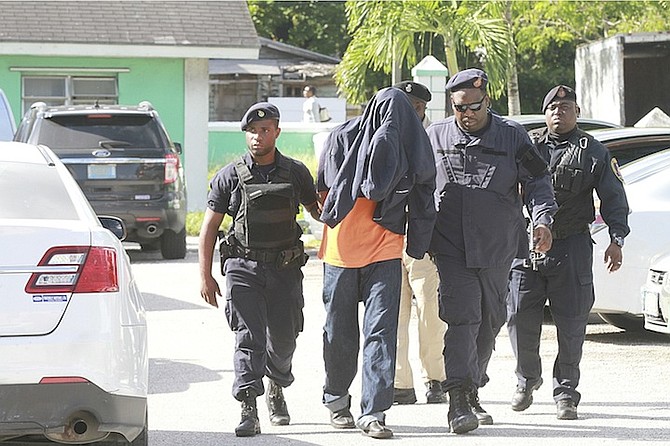 The three young men, with faces concealed, who are accused over the killing of Adonai Wilson. Photos: Tim Clarke/Tribune Staff

A JURY heard evidence from a high school graduate who alleged that she saw 16-year-old Adonai Wilson punch one of three teenagers accused of his murder shortly before the victim was seen lying in a pool of his own blood on Prince Charles Drive.

The 17-year-old witness, whose identity is being withheld because she is a minor, shed light on events that occurred before the fatal stabbing of Wilson, a 12th grade student at Doris Johnson Senior High School.

Three accused teens, ages 18, 15 and 17, who deny murdering Wilson, are on trial before Justice Bernard Turner in connection with the stabbing death.

According to initial reports, Wilson, 16, was stabbed multiple times during an argument with several other students shortly after school was dismissed early because of exams. He died in hospital a short time later.

The incident took place around 2pm on Prince Charles Drive and a graphic cell phone video of the incident was spread on social media.

The teens have retained attorneys Murrio Ducille, Roberto Reckley and Ian Cargill to represent them.

Kristan Stubbs and Bradford McKenzie are prosecuting for the Crown.

In yesterday’s proceedings, the 17-year-old was asked what she recalled about that day.

The witness said she went to school - Doris Johnson Senior High - to take exams. “What time did you leave school that day?” Ms Stubbs asked.

When asked by the prosecutor why she stayed behind, the teen witness said there was a meeting with 12th graders that day.

She said after the meeting, she started walking home with her girl friends.

When asked who was her best friend, she named the 18-year-old accused seated in the prisoner’s dock, noting that she had known him since the 7th grade and saw him everyday at school.

The witness said she did, as he too was there for the exams.

“Did you see him anywhere else after school?” the prosecutor asked.

“At Popeyes,” the court heard.

When asked if she spoke to him at the fast food restaurant, she said no. She also could not recall the length of time it took to walk to the eatery.

She’d gone there to meet her cousin, the 15-year-old accused, so they could go home.

The witness said that moments later, Wilson, whom she knew as a fellow 12th grader, came and allegedly punched her best friend – the 18-year-old accused – in the head.

She said she pulled her best friend by his jacket to prevent things from escalating further while Wilson then ran away in the direction of the Souse House on Prince Charles Drive.

“Who, if anyone, was present when Adonai punched him?” the prosecutor asked.

“No one,” the witness said.

The 17-year-old girl said she didn’t know where her best friend or her cousin went afterwards but she left to catch a bus at the traffic light “by Blanco Bleach” on Prince Charles Drive and Fox Hill Road.

“Did you see anything when you were at the light to catch the bus?” the prosecutor asked.

“Adonai was laying on the floor by the gate,” the court heard.

“Do you know why he was lying there?” the prosecutor asked.

“I saw blood on his back,” the witness said.

The girl said she went by her best friend’s house to ask him about the reason for his and Wilson’s earlier scuffle.

“Someone had burst (hit) Adonai under the pavilion during break time (recess) and he believed it to be him because he’d been standing behind Adonai,” the witness said.

After getting a reason, she left and went home but her cousin was not there, the court heard.

She said she did not see him until her aunt and guardian, with whom she lives, came home. She could not recall what time this was.

Roberto Reckley, in cross-examination, sought to clarity a few details in her testimony.

“Just to be clear, you didn’t see your cousin involved in any fight?” the lawyer asked.

“You didn’t see him with any knife?” the lawyer suggested. The witness agreed.

“You in fact told this to police? Correct?” Mr Reckley further suggested. “Yes,” said the witness.

Mr Ducille asked the witness if her best friend struck Wilson back. She said no.

Justice Turner asked the jury if they had any questions for the witness.

The 12-member panel asked the witness if her best friend was bleeding after the scuffle. She said yes.

She also said Adonai was bleeding from it as well.

“Are you friends with Mr Wilson?” the jury’s forewoman asked.

She then denied seeing anyone with a knife.