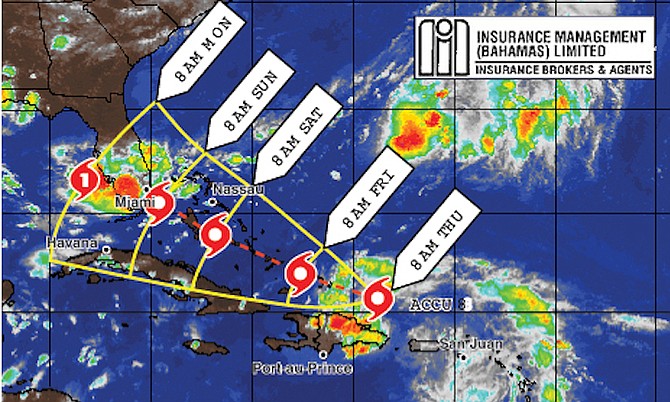 7.55pm UPDATE: A new map of the projected path has been issued by Accuweather (above).

TRANSPORT and Aviation Minister Glenys Hanna Martin has urged residents living in areas affected by Hurricane Joaquin last year to pay attention to weather warnings, as severe flooding is expected in those islands from Thursday morning.

The islands she warned to be on alert are Long Island, Ragged Island, Acklins, Crooked Island, Mayaguana and Inagua.

Her statement came after weather forecasters said a strong tropical wave - centred over over the northern Leeward Islands on Wednesday morning - has a 60 per cent chance of becoming a tropical cyclone through Thursday and 80 per cent over the next five days as conditions become more conducive near Hispaniola and the southern Bahamas.

“The alerts warn that those islands specifically, are likely to be affected by severe flooding beginning Thursday morning and potentially lasting 24 to 36 hours,” Mrs Hanna Martin said. “Severe flooding indicates high levels of water accumulations in residential areas,” she said, calling on all residents to take every necessary precaution to assure the protection of life and property.

Basil Dean, deputy director of the Airport Meteorological Office, said that regardless of tropical cyclone formation, gusty winds and heavy rains are highly likely to accompany this system, beginning on Thursday morning, which “could result in severe flooding over the Turks and Caicos Islands and the southeast Bahamas, which includes Long Island, Ragged Island, Acklins, Crooked Island, Mayaguana and Inagua.”

Mr Dean advised residents on these islands to monitor the system and be prepared to take quick and necessary action to minimise possible flood damage.

“Drainage systems should be cleared of all debris between now and Thursday to maximise the free run-off of rain-water,” he added. Large sea swells are also expected.

Earlier on Tuesday, the National Emergency Management Agency (NEMA) cautioned the public to “remain in a state of readiness” heading into the peak of this year’s Atlantic hurricane season, with international weather agencies warning that this could be the “most active” season in almost five years.

NEMA Director Captain Stephen Russell called on Bahamians to monitor the movement of all of the storm systems, and to “finalise plans for the remainder of the hurricane season in order to safeguard lives and protect properties.”

Capt Russell’s comments came as international weather forecasters reported that Tropical Storm Gaston, which developed as the seventh named storm of the season on Monday night, is expected to become an Atlantic hurricane later on Wednesday. Gaston was centred 975 west of the Cape Verde Islands and moving west north west at 17mph with maximum wind speeds of 70mph.

Additionally, the National Oceanic and Atmospheric Administration (NOAA) revised its predictions for the 2016 Atlantic hurricane season, saying this year could be the most active since 2012. Those predictions are a 70 per cent chance of 12 to 17 named storms forming, and the potential for two to four major hurricanes, according to reports.

“At this time, weather experts are monitoring a number of systems in the Atlantic, and one is anticipated to pass very close to our chain of islands by this weekend,” Capt Russell said. “Although not a named system at this time, we saw where Hurricane Joaquin last year rapidly intensified while almost stationary off the central and southeastern Bahamas.

“Therefore, we are urging all to continue to monitor the movement of all the systems, and to finalise plans for the remainder of the hurricane season in order to safeguard lives and protect properties.”

Elsewhere in the Atlantic, Fiona is “barely maintaining” its status as a tropical depression, with its maximum sustained winds near 35mph. The depression, which is expected to become a “remnant low” in the next few days, is centred about 455 miles south of Bermuda and is moving west-northwest near 13mph.

The hurricane season runs from June 1 to November 30, with the peak period from September through to the end of October.