Steven Gardiner Shines With Silver In The Diamond League 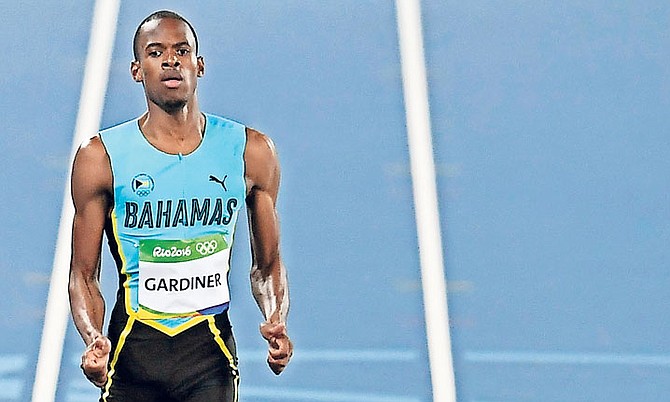 The Athletissima Diamond League Meet hosted many of the top names in track and field, including a pair of Bahamians, looking to build on the momentum from the Rio Olympic Games.

Steven Gardiner and Donald Thomas were in competition at the 41st edition of the meet, hosted in Lausanne, Switzerland.

Gardiner finished second in his signature event in 44.75 secs at the 11th meet of the Diamond series.

In Rio, Gardiner finished fifth in the semifinal in 44.72 secs. He was the only one of the three Bahamians to advance to the semi-final. Both veteran Chris ‘Fireman’ Brown and newcomer Alonzo Russell were eliminated in the first round.

His season’s best time of 44.46 secs came in June at the Bahamas Association of Athletic Associations’ National Championships.

After getting off to a slow start in his first three meets of the season including a second place finish in his season’s debut in 45.83 seconds at the Chris Brown Bahamas Invitational in April, Gardiner surged to victory at the American Track League in Atlanta, Georgia when he dipped below 45 secs for the first time all season in 44.62.

Thomas finished tied for sixth in the high jump, with a clearance of 2.25m.

He also competed against a field of medallists and competitors from Rio.

Mutaz Essa Barshim from Qatar, a silver medalist at the Olympics, won the event in 2.35m, followed by Robbie Grabarz of Great Britain at 2.32m, by virtue of fewer knockdowns.

Erik Kynard of the United States, who finished just outside of the medal podium in Rio was third in Switzerland, also at 2.32m.

Bohdan Bondarenko of the Ukraine, who secured the bronze in Rio, was fourth yesterday, also at 2.32m. Fellow countryman Andriy Protsenko was fifth at 2.29m.

Pavel Seliverstau of Belaruse tied Thomas for sixth at 2.25, followed by Konstantinos Baniotis of Greece and Sylwester Bednarek of Poland at 2.20m.

After he got eliminated in the qualifying rounds in London, England four years ago, Thomas returned to the Olympics in Rio and came up with a jump of  2.29m to finish seventh.

Thomas, the 32-year-old 2007 IAAF World champion in Osaka, Japan, was clear through the first three heights at 2.20m and 2.29m before he knocked down all three attempts at 2.33m.

Coming off his bronze medal at the Pan American Games and sixth place at the World Championships last year, ended up tied with two other competitors.

Several other Olympic Champions and medallists competed yesterday at the Athletissima.

The 23-year-old, who didn’t run in Rio as she only finished sixth at the US Olympic Trials, equaled or surpassed the time for the fourth time this season.

Another Rio gold medallist, Dalilah Muhammad of the United States, continued her winning ways with a first place finish in 53.78 secs to conclude her season.

In the men’s 110mH, Orlando Ortega of Spain got the better of Jamaica’s Omar McLeod in 13.11 secs.

The pair finished in reverse order in Rio.

Asafa Powell claimed his fifth 100m victory in the Diamond League series and his 97th sub-10 time in 9.96 secs.

According to the IAAF, winners of each Diamond Race will get a Diamond Trophy, $40,000 prize money and a wild card for the IAAF World Championships.

Each of the disciplines is staged seven times with the top six Athletes being awarded the same amount of points at each meeting with the exception of the Final where the points are doubled.

The Athlete with the highest number of points in each discipline at the end of the IAAF Diamond League season wins “The Diamond Race”. In case of equality on points, the number of victories decides, if there still is a tie, the better result at the Final decides.

The Diamond Race winners of each discipline are awarded with a prize money of $40,000 at the end of the season.