Tropical Wave 'Not As Wet And Windy As Originally Predicted' 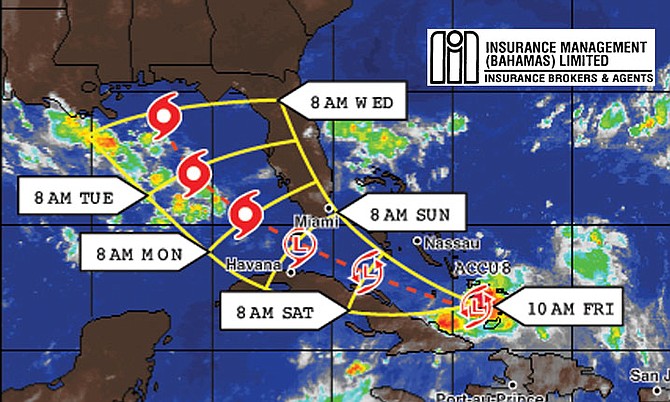 TROPICAL wave 'Invest 99L' will not produce as much rain and wind over the southeast Bahamas as was originally predicated, Deputy Director of the Department of Meteorology Basil Dean said Friday.

In an interview with the Tribune, Mr Dean said the tropical wave has made a turn toward the west and is struggling to develop into an organised storm.

U.S. Air Force Hurricane Hunters found tropical-storm force winds on Thursday but as circulation has not fully closed, it has not been classified as a tropical depression or tropical storm. The speed of the winds dropped down below tropical storm force later in the day. However, Mr Dean said residents in the southeast Bahamas including Turks and Caicos, Long Island, Ragged Island, Acklins, Crooked Island, Mayaguana and Inagua should still prepare for heavy rains.

"Crooked Island fared very well through the night. We have been told they had only overcast skies and light rains on Thursday. The storm has shifted toward the west and going over Hispaniola broke it up significantly, so it is not as strong," Mr Dean said.

"In New Providence, Saturday will be just a typical summer day and late Saturday night we will get some heavy showers and thunderstorms taking us into the mid afternoon and then start clearing up in Sunday evening."

Earlier this week, National Emergency Management Agency Director Captain Stephen Russell called on Bahamians to monitor the movement of all of the active storm systems, and to “finalise plans for the remainder of the hurricane season in order to safeguard lives and protect properties”.

Don't sleep on this storm yet. Remain vigilant.

You shoulda watch the Whether Channel this morning. Those guys seem to be mad because the system dissipated. It was like a comedy suspense. They kept checkin to see if the inner wall would reappear and even after the hurricane aircraft suspended its flight they were saying "a whole lot of new conditions would have to happen for the system to redevelop. Finally they admitted that when the wave passes over Florida, most residents won't even know it