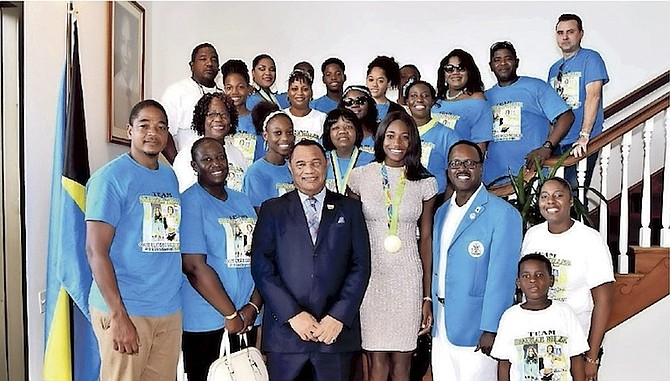 THE threat of impending weather posed a major setback in the celebrations planned for Olympic champion Shaunae Miller. However, the Bahamas’ latest “Golden Girl” was just happy to be home.

Miller was welcomed by fans, family and well-wishers on Friday afternoon, both at the Lynden Pindling International Airport and at the Thomas A Robinson National Stadium.

“I’d just like to thank you guys for all of the support and prayers. God really was listening and I just thank him so much. I went out there and put my all on the line for Team Bahamas and we came out with the gold medal so I’m just so thankful,” Miller said. “My parents and my family were there in Rio supporting me and we’ve been through so much to get to this point. This has been a long journey and I have so much more years in the sport, it’s an exciting time.”

Her tour on Friday also included a courtesy call to the Office of the Prime Minister, however, a motorcade in her honour was postponed due to inclement weather.

Miller said she was eager to celebrate the accomplishments of the entire team, which continues to bring recognition to the country through the power of sport.

“As a team we had so much fun. I think that we took down one of our best teams if you look at all the performances. The one who I was mostly impressed with was Pedrya Seymour. Most people don’t know but she used to be a 400m hurdler, now she’s doing the 100m hurdles so her and her coach are doing a great job,” she said.

“People always look at the Bahamas and think that we’re such a small country, but the thing that they’re missing is that we’re a powerful country as well. We’re full of talent and I continue to stress that so much. Last year I went to the family islands and I started talking to some of the kids and that’s truly where all the talent is at. We have islands full of kids with great talent and potential and we just try to inspire them.”

Miller comes off the feat which made her one of the most talked about stories in track and field this year when she stumbled across the finish line to claim the Olympic title and hold off a late surge by American Allyson Felix in a personal best time of 49.44 seconds.

The 32-member Team Bahamas finished the Rio Olympic Games with two medals, several national records and an historic appearance in a new discipline.

Team Bahamas wrapped up its competition at the Olympic Stadium on Saturday night in the grand finale with the quartet of Alonzo Russell, Michael Mathieu, Steven Gardiner and Chris ‘Fireman’ Brown securing the bronze medal in the men’s 4 x 400 metre relay.

Miller, in thrilling fashion, became the first individual gold medallist for the Bahamas since Tonique Williams-Darling in 2004.

The Bahamian contingent also included Emily Morley, who made history as the first Bahamian to compete in rowing, along with swimmers Arianna Vanderpool-Wallace, Joanna Evans and Dustin Tynes.

After missing the latest meet in the IAAF Diamond League meetings this weekend, Miller now stands in second position in the women’s 400m with 30 points behind Jamaica’s Stephanie Ann-McPherson who leads with 31. Natasha Hastings of the United States is third with 28 points. The Diamond Race includes two more meetings, September 1 at Zurich and September 9 at Brussels.