Roberts: Izmirlian Has No Credibility 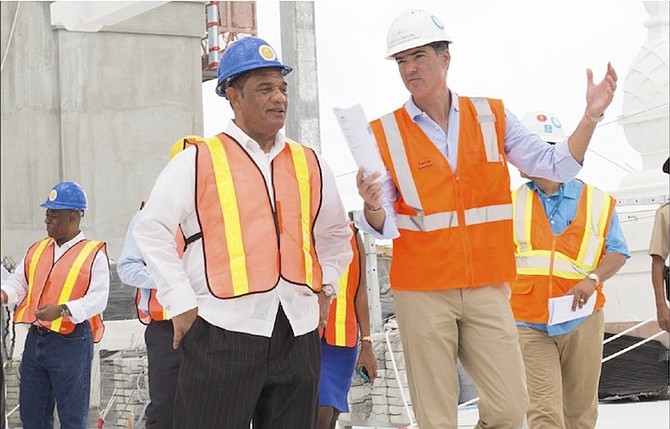 Prime Minister Perry Christie and Baha Mar CEO Sarkis Izmirlian pictured during the construction of Baha Mar. PLP chairman Bradley Roberts has insisted that the developer could not be trusted on matters relating to the stalled resort.

PROGRESSIVE Liberal Party Chairman Bradley Roberts yesterday criticised Sarkis Izmirlian, Baha Mar’s developer, accusing him of having “absolutely no credibility” and insisting that he could not be trusted on matters related to the shuttered $3.5bn West Bay Street resort.

Mr Roberts also castigated FNM Leader Dr Hubert Minnis, saying his position on the Baha Mar issue, specifically the Supreme Court’s sealing of the documents relating to the new deal to open the resort, disqualified him from serious consideration to lead the country. He said this was a “slap in the face” to the country’s judiciary.

And regarding FNM Senator Carl Bethel’s statement that the Official Opposition would consider launching a Commission of Inquiry into the Christie administration’s handling of Baha Mar, Mr Roberts said this was as “useless as tits on a bull.”

In a statement released hours after the government announced the formation of the committee on Sunday, Mr Izmirlian’s company BMD Holdings alleged that Mr Wu has “engaged in documented questionable behaviour,” adding that it was CCA that created the situation that led to Baha Mar’s troubles. CCA is Baha Mar’s general contractor.

“Sarkis Izmirlian, Dionisio D’Auguilar and Hubert Minnis are three people who continue to disrespect Bahamians with their duplicity on Baha Mar and therefore have absolutely no credibility and cannot be trusted on this matter,” Mr Roberts said during a press conference yesterday at the PLP’s headquarters on Farrington Road.

“Sarkis, who brought the China EXIM Bank and China Construction of America (CCA) to the Bahamas as his partners in the Baha Mar deal, unceremoniously betrayed them and the government and people of the Bahamas on June 29, 2015 when he filed for Chapter 11 bankruptcy in Delaware. The records that Sarkis’ legal team filed in Delaware showed that he had been planning this dastardly move at least as early as February 2015. This means that even while the prime minister, at Sarkis’ request, was asking EXIM and the highest levels in China to fund the completion of the deal, the very same Sarkis was pursuing Chapter 11. Who could ever trust him again?”

Mr Roberts asserted that Mr Izmirlian was duplicitous because he promised that he was in good financial standing to carry the weight of Baha Mar, but documents showed that he was far from this.

“Let’s lift the lid on what Sarkis’ legal team filed in Delaware to see the facts. The declaration of Thomas Dunlap (former Baha Mar president) filed on June 29, 2015 in Delaware admitted to obtaining debtor in possession (DIP) financing of up to $80m from a company owned by Sarkis. Dunlap said that ‘any form of post petition financing on an unsecured basis would plainly have been unobtainable.’ That’s right – plainly unobtainable. And of the $80m DIP financing, the Delaware Court approved $30m and Sarkis’ company funded less than $15m. That’s right less than $15m and not the $80m he was touting around Nassau in the media. This kind of business dealing is duplicitous and misleading, especially when thousands of jobs and tens of millions of dollars owed to creditors hang in the balance.

“Sarkis knew at all material times that the bank’s debt was secured for $2.3 billion and that CCA also had secured debt behind the bank. So, realistically the only people who could sensibly finish the project were the bank, or CCA or Sarkis. But Sarkis put up less $15 million – not the estimated $600 million required to finish and open the project.

“Sarkis’ own filings in Delaware made it clear that Sarkis had no funding to complete and open the project,” Mr Roberts added.

“In the middle of this is the hapless Dr Hubert Minnis who lacks a mind of his own and who apparently takes his cue from talk shows and social media. Not only did he support the Delaware bankruptcy filing, but how else can one explain his temerity in accusing the government of breaking the law by selling citizenship?

“This is not legally possible. Further, the Bahamas Supreme Court reviewed and approved the terms and conditions of the resumption of the project therefore by inference, Dr Minnis has unwittingly regarded the Supreme Court with utter contempt by suggesting that this national institution was a part of a criminal conspiracy. He provides no evidence – he simply repeats what he heard on the talk shows and in social media without the benefit of sensible reasoning. This alone disqualifies him from serious consideration to lead this country,” Mr Roberts said.

Mr Roberts said the FNM’s focus on these sealed court documents was no more than a distraction because the party was shocked that Prime Minister Perry Christie was able to get all Baha Mar’s stakeholders to reach an agreement to open the resort.

“The statement by the PLP’s chairman is not worth dignifying with any comment,” BMD Holdings said. “CCA’s behaviour on Baha Mar speaks for itself. The government of the Bahamas’ actions and pronouncements on Baha Mar, particularly since July 2015, speak for themselves.”

Roberts is a modern day Jester. Got to love him for making his king appear intelligent in comparison. LOL!! Job well done.

As if any thinking person in the Bahamas would believe anything this stink mouth man has to say. Worse than what they replaced by a mile!

I wonder if Big Bad Brad has ever had a coherent thought - what with his head shoved so far up the PLP bum!

Belly-aching about the credibility of Sarkis Izmirlian as opposed to the pristine and stellar credibility of, well let's face it, just about any of the PLP gaggle of tramps and thieves!

As for his comment regarding Carl Bethel's proposal for an inquiry being as "usless as tits on a bull" - of course he wouldn't want an inquiry - what other useless PLP appendages may be discovered by such an inquiry??