Pm: Baha Mar Will Begin To Open In Second Quarter Of 2017 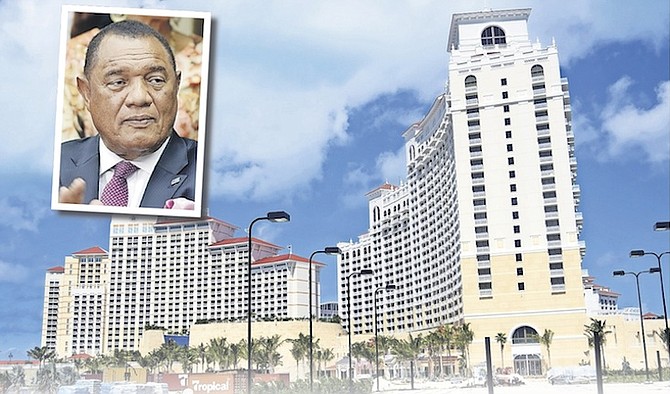 PRIME Minister Perry Christie gave his most specific comments yet about when Baha Mar will open, revealing during a Bahamas Hotel Association (BHA) event on Friday that the troubled mega resort will begin its phased opening in the second quarter of 2017.

"(Chow Tai Fook Enterprises) is arranging for operation by the Grand Hyatt of the Casino and Convention hotels and of other properties by SLS and Rosewood, all internationally renowned brands, beginning with a phased opening in the second quarter of 2017," he said.

"These operations will almost immediately begin to have a positive economic impact."

Mr Christie also said 1,500 employees will be hired "imminently" in the new year.

"This is to facilitate the phased opening of 1,800 rooms at the conference and casino hotel, the casino, convention centre and golf course, and employment of up to 3,300 by August, 2017, and 4,300 by December, 2017, when all components have been completed and opened."

Chow Tai Fook Enterprises (CTFE) will invest $200 million in "pre-opening festivities, development of family amenities, entertainment and offshore island facilities and demolition and re-development of the former Crystal Palace Hotel," Mr Christie said the gathering of hotel and tourism personnel. "With these additional investments completed, the project will have created 5,700 new direct jobs and an additional 4,160 indirect and inducted jobs."

Mr Christie said Baha Mar's contractor already has over 500 people working on site, overseeing standards and constructing a timeline for the resort's completion.

"This will ensure on-time competition of those properties that are slated to open in April, 2017, and by December, 2017," he said.

Mr Christie mentioned other developments in the pipeline, including some slated for Grand Bahama.

"The competition and opening of the Baha Mar mega resort will be complemented by the opening of the 250-room, all-inclusive Warwick Hotel on Paradise Island and the phased construction at The Pointe of a 100-unit condominium complex slated for competition September, 2018, and a branded, 150-room hotel which will open November, 2018.

"The 900-space garage at The Pointe is also undergoing a phased opening with current access given to annual pass holders and tenants and public access to the garage following shortly thereafter.

"These are all developments which are expected to have immediate and significant impact on commercial activity, employment and government revenues in New Providence and indirect impacts on the rest of the country."

A high-ranking government delegation left for China on Thursday to meet with prospective Baha Mar buyer CTFE and tour its casino operations.

The heist is complete. Stolen from Sarkis and given to the chinese mafia....

Perry has become the troll that lives under the Bahamar carcass ............ just prorogue the House please and go to your grave with the tiny bit of dignity you may have left

Thank GOD! Open it and be done with it!!!

I can't believe that Bahamians actually give credibility to anything that comes out of this man's mouth! For God's sake, y'all wake up!! Every time that Perry Christie opens his mouth nothing but hot fart comes out! He's a airbagger! This is the same man who said that he wouldn't be seeking reelection after this current term in office, yet here he is. This is the same man who promised a Bahamas for Bahamians, yet our country is now being controlled by China. This is the same man who promised that things will be "dead good" soon, yet middle class Bahamians continue to lose their jobs and homes. False promises after false promises, after false reassurances, after failer, after failer! That's his mode of operation and that's his legacy. Nothing will change.

Clambering to open bahamar at this juncture is nothing more than an act of desperation and a political stunt to try and influence the electorate in the upcoming general elections. Sorry Perry, but your empty talks are nothing more than an exercise in futility! Sensible Bahamians aren't buying your brand!

No kidding. He is useless! That man over the past five (5) yrs. has driven that country into the gutter's gully. HORRIFIC! ABOMINABLE! TRAGIC!

In other news, PC is going to flap his arms and fly to the moon later today!

Too little too late. Had perry those stay out of the battle for Bahamar it would have been going into it;s second year of operations, not just hoping to be open 2 years later. Screw you perry with your lying ass

Another expensive taxpayer funded trip to China !. Given the power situation in N.P. how can this mammoth hotel be supplied with regular power or will it be at the expense of the local populace.

Crooked Christie shafted Sarkis and then fooked the Bahamian people with Chow Tai Fook, all the while not yet having told us what additional concessions he gave his Red China friends so that they may have the privilege of royally fooking us! Simply unbelievable!! It's abundantly clear Crooked Christie takes the Bahamian people to be fools whom he need not have any regard for whatsoever.

*A high-ranking government delegation left for China on Thursday to meet with prospective Baha Mar buyer CTFE and tour its casino operations.

Thought they said high ranking...anyway with that being said it is time for this government to get behind the eight ball and get the Bah mar project open if only to help take the tax strain off the rest of the economy. Had they not interfered it would have been up and running over a year ago Not only that but with the US unemployment rate dipping below 5% and that economy appearing to pick up pace in anticipation of president elect, Donald Trump's, promise to cut taxes, reduce red tape for businesses and spend billions to rebuild America,thus creating many more jobs, this government needs to ensure that this country, more importantly its tourism plant, is up and running to accommodate additional tourists

PM Christie increasingly proves to be totally out of touch with the electorate with his asininely ongoing belief that opening Baha Mar will be his savior come 2017.

Christie could give every Bahamian $100,000 and he would still face the biggest election landslide defeat in Bahamian history simply because he deceived the electorate with his "we believe in Bahamians" & "Bahamians first" 2012 campaign promises which he has not uttered *even once* since becoming Prime Minister!

Bahamians are not the forgetful, tribal, fools perceived by politicians and the so called elite.

NOBODY can forget putting their trust and children's future in Christies "mortgage relief" "we believe in Bahamians" & "Bahamians first" 2012 campaign promises, especially as everyone is suffering the worst unemployment, reverse economic meltdown in Bahamian history, while daily watching Filipinos, Latinos, Haitians, Indians, Chinese, Africans and Jamaicans strip benefits from economic gains achieved by decades of hard work done by generations of Bahamians!

Four plus years of ongoing corruption, bi-monthly scandals and blatant betrayals of the electorates trust, compounded by Christie's totally unacceptable mistreatment of Mr. Sarkis Izmirlian with Baha Mar will be repaid with full dividends and highest interest come 2017.

What differencedoes it make? He screwed it up from the beginning,he has invited thieves to inherit an honest programme inducted by Izmerlian, Christiehis entire entourage and the stinking red chinese should all be lined up and shot.

What your current President, that profoundly ignorant and inept loser has done to Sarkis Izmirlian is not anything short of CRIMINAL! Yes, Mr. Izmirlian's hubris and greed added to his demise. Nevertheless, 66.6% of his FAILING is squarely at the hands of that ding bat you folks have as President of that country. Your PC is grossly culpable. TRAGIC!

How in the hell is Baha Mar ever going to open up if bankrupt BPL/BEC lacks the electrical generation capacity to bring it on to the grid without shutting down the power supply to thousands of other commercial and residential customers?! Also, we do not have at the public dump anywhere near the waste disposal capability necessary to handle the many thousands of tons of additional garbage that will be produced by Baha Mar. Perry Christie knows all of this and must think we, the Bahamian people, are all idiots. Corrupt Christie and his cohorts have no doubt generously lined their pockets so that they will be all smiles when forced to walk away from the horrendous (and likely unmanageable) financial mess they have created, leaving the next government and the Bahamian people mired in debt to suffer future hardships that will be most unbearable by any definition.

The carrot was pushed further out, so I guess this means the election date was pushed back as well. Can't have any requirements for actually producing something e.g.,"national development plan"

Please oh please someone make this man and all of his ilk disappear into obscurity!