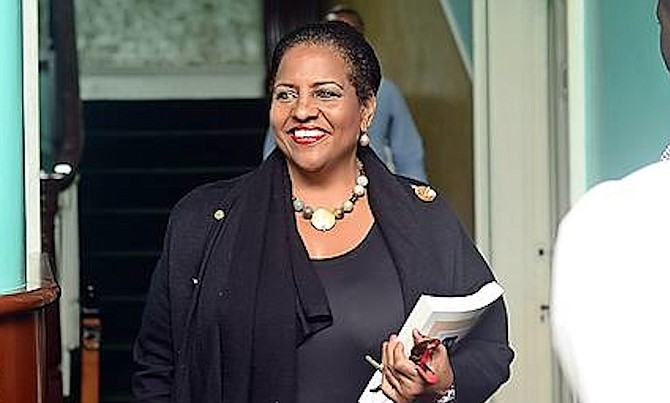 FREE National Movement (FNM) Shadow Minister of Labour Loretta Butler-Turner yesterday said she found it “highly suspect” that Prime Minister Perry Christie announced that 1,500 people will be hired to work at the stalled Baha Mar resort in the height of election season.

Mrs Butler-Turner told The Tribune that while it is “good and welcome news” that Bahamians will be able to get jobs, she has “seen and heard the Baha Mar opening dance” from Mr Christie “one too many times” and she will “not hold her breath” that the resort will finally open.

On Friday, Mr Christie revealed during a Bahamas Hotel and Tourism Association (BHTA) lunch that the troubled mega resort would begin its phased opening in the second quarter of 2017.

The Prime Minister also said 1,500 employees will be hired “imminently” in the New Year.

“This is to facilitate the phased opening of 1,800 rooms at the conference and casino hotel, the casino, convention centre and golf course, and employment of up to 3,300 by August, 2017, and 4,300 by December, 2017, when all components have been completed and opened,” he said.

“Chow Tai Fook Enterprises (CTFE) will invest $200 million in pre-opening festivities, development of family amenities, entertainment and offshore island facilities and demolition and re-development of the former Crystal Palace Hotel. With these additional investments completed, the project will have created 5,700 new direct jobs and an additional 4,160 indirect and inducted jobs,” he added.

Mrs Butler-Turner said Mr Christie has been disingenuous and misled the Bahamian people about Baha Mar “too many times to count” and she does not believe that this time will be any different.

“We have heard this song from the Prime Minister a few times too often and none of it has come to fruition,” Mrs Butler-Turner said. “He said workmen were on the ground a couple months ago and that wasn’t true, so any promises from Mr Christie are ringing hollow at this point. What is different about this proclamation than all the others?

“I take you back to the meeting he had in the Cabinet Office where he said everyone will be paid. Some people have gotten their money but many of the contractors are still waiting so I find it hard to believe anything he said. He has been disingenuous and (misled) the people about Baha Mar being sold. So I will have to have real evidence to substantiate what he is saying because I have lost faith in him and his empty promises.”

Mrs Butler-Turner also said she finds it “coincidental” that jobs are coming right before Bahamians head to the polls.

“Mr Christie and his cohorts have been an abysmal failure in office and this is his last attempt to hoodwink the Bahamian people,” she said.

“The second quarter is May, June, July - right around elections, I find that highly suspect that’s when jobs will be given. I caution the Prime Minister to remember that we have been advised that the building has been compromised and needs considerable work, so in his rush to say he is employing people I do not want him to embarrass this country and get tourists here and that building is not up to standard. To me that is very, very important.”

A high-ranking government delegation left for Hong Kong on Thursday to meet with prospective Baha Mar buyer CTFE and tour its casino operations.

In October, 2015, more than 2,000 Baha Mar employees were made redundant. At the time, the resort’s court-appointed joint provisional liquidators, Bahamas-based KRyS Global and UK-based AlixPartners, said the layoffs were due to the financial insolvency of the $3.5 billion resort project that has been stalled since June 29, 2015.

So perry dragged BahMar out for years just so he could use it as an election vote getting tool?? That's giving the man too much credit and is he really that crooked? I mean he's bent but that badly??

The unemployment numbers will fall significantly over the next few weeks as merchants boost up their staff for the holiday season. Many of these temporary workers will remain employed until at least the second week in January as many Bahamians continue their holiday shopping thru the new Bahamian holiday. Then, according to the PM, this is when Bah Mar will be busy hiring and training staff. So rather than the unemployment numbers going up in January, they will actually still be going down. And if the Pointe and other projects come on stream in the first quarter, as Christie has suggested, then more people will be working and when Carnival comes around in April basically everyone who is looking for a job in New providence can be employed. So when Bah Mar starts to open, New Providence will be close to near full employment..and guess who happy, newly employed workers, who just finished partying in carnival will vote for?

your Math is a bit off my friend. The Pointe and Bahamar will not employ some 10,000 persons. take into consideration that youth unemployment in the country sits at above 31%...in 2015. Add another 3,000 to that since summer of this year for high school graduates. The targeted amount of employed can not be expected to exceed 2,000 -3,200 and even then that's a high estimate. Also add the students who will be graduating for Summer 2017 to that statistic and it tells a different story.

All of that and we haven't even touched the perilous situation in Grand Bahama.

While I am glad some persons will be able to gain employment, I highly doubt it will be enough to reverse the damage done under this administration in the eyes of the people.

The building is not complete, the work needs to be re-done in a lot of areas.

OF COURSE PERRY IS LYING....

No way Bahamar will be opened in three months....

My math is not off. In fact my numbers are conservative. Your PM says the point will hire about 2,000 people for its first phased opening in April. Once that phase is open they will be hiring and training a second set which your pm claims will bring the number up to 5,000. so that is an additional 3,000. The Pointe will hire about 300-500 construction workers and about 1,000 permanent workers around April. The retail stores and theater at the Pointe will also be hiring workers and Carnival will hire close to 1000 (or more ) workers and vendors. The private sector in New Providence will hire about 2,000 temporary workers in the next few weeks and there will be a few hundred new jobs coming on stream with Popeye's and Carl's Jr on Carmichael, Aliv's additional franchises, Solomon"s opening in the East. Also if it does get extremely cold in the Northern US and Canada, hotels here will be hiring additional workers as snow birds flock here (and spring breakers). Then there is still workers being hired to complete clean up, repairs and restoration because of the storm. It is up to your government to keep the ball rolling, give other businesses incentives to hire additional workers and also to take on infrastructural projects of their own that will also hire more workers. Now you do the math..could be closer to 15,000 (yes Fifteen Thousand ) over the next four months...Your government has the ball! But can BPL keep the lights on? Or will we be seeing in da dark?

I stumbled across your (the Bohemian people) situation after seeing a video on YouTube of the Baha Mar g650 jet. Anyway, I feel for you. The PLP sounds like our Republican Party here in the US and now we have a maniac as president. In our system, everyone has their hands in each other's wallet. It's the same around the world.

I sure would love to read the sealed court documents your president desperately wants to keep closed. If he had nothing to hide he would release them.

At least they rejected the Chinese casino operator.