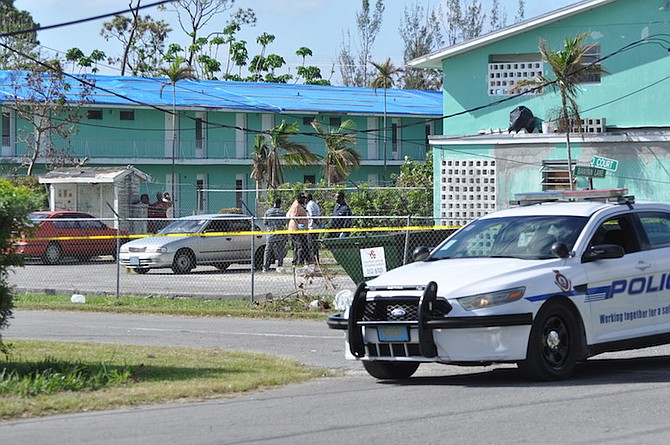 Police on the scene on Sunday morning in Freeport, where a man was found dead in a car. Photo: Vandyke Hepburn/BIS

ONE man is dead and a second was stabbed and hospitalised in Grand Bahama in separate incidents over the weekend, police reported.

Police were on the scene of a murder shortly before 10am yesterday in Freeport, where they discovered the body of a man in a vehicle.

According to Inspector Terecita Pinder, the police were called to an apartment complex on Tangelo Lane, where a black man was discovered inside a grey-coloured sedan with injuries to the body. He was pronounced dead at the scene by a doctor.

Insp Pinder said police are investigating the circumstances surrounding the man’s death. This latest murder is the island’s 18th homicide for the year. There have been 102 homicides in The Bahamas this year up to press time, according to The Tribune’s records.

On Saturday, a man was stabbed at a business establishment near the International Bazaar, where a man had been shot to death a week earlier.

According to police reports, the victim was at an establishment on East Mall Drive around 3am when he and a group of men became involved in an altercation and was stabbed about the body.

He was transported by private vehicle to the Rand Memorial Hospital, where he was listed in serious condition.


Last Sunday, Kashon Fowler, 21, was shot to death outside the establishment around 3am by a gunman. When police arrived, they found the body of a man lying on the ground in the parking lot area of the business.

Police are actively investigating these matters and are appealing to anyone with information to call 350-3107 through 12, 911/919 or call the nearest police station.

The PLP doesn't give a damn about the Bahamian people, the people deserve I better life, they are a good people, they are my friends. The PLP live is guarded communities, carry guns, are protected by government security (which is paid by the people), they could care less if the people kill themselves. The PLP is an evil entity, greed and intimidation is what they live for, our homes look like jails because of them. Our educational system is worthless because of them, but don't think for a minute that this is a mistake folks, it's all intentional on their part to keep us down and at each others throats; money is the only god they worship. Hundreds of millions of dollars collected by them and they won't even tell us where it went; only crooked dictators do the same. I have to leave the Bahamas next month after 15 years living in Freeport because it's not safe anymore. Just last week someone stolen all the veggies from my garden. At first I was real mad, but than I realized how bad things really are here that someone needs to feed their family any way they can; so I let it go, and asked God to bless the veggies for whoever needed it so bad. Hotels are closing their doors and claiming false excuses because they fear the government, businesses are leaving, and yet the PLP government can't explain where all our money has gone too; bullshit thieves!