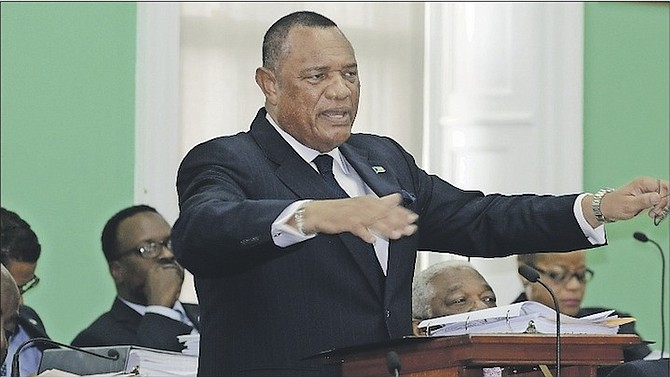 PRIME Minister Perry Christie yesterday bemoaned Bahamas Power and Light’s inability to provide uninterrupted electricity supply to the island, telling The Tribune he was not only “distressed” by the outages, but that he ordered a probe to uncover the root cause of the most recent island-wide power cut.

Mr Christie suggested that the latest mass disruption had brought the government embarrassment as it took place the day before the opening ceremony of an international civil aviation conference, which began yesterday at the Kendal Isaacs National Gymnasium.

While the prime minister said he was unofficially advised that the incident was the result of “human error,” he insisted that it was too “catastrophic” and “unusual” to let it pass without the “highest investigation”.

Mr Christie’s position regarding BPL’s service inconsistency is in stark contrast to that of his Deputy Prime Minister Philip Brave Davis, who is also minister of works.

In a recent interview, Mr Davis backed the electricity provider saying he has “no regrets” over handing over the day-to-day operations of the former Bahamas Electricity Corporation (BEC) to American company PowerSecure.

He told this newspaper he thinks BPL is “meeting its mandate” and blamed the constant power outages on “aged machines”.

“I am as distressed about this as every Bahamian,” Mr Christie said when he was asked by The Tribune to give Bahamians a word of comfort when it came to the constant outages, which have angered many.

He spoke on the sidelines of the opening ceremony for the ninth International Civil Aviation Organisation Air Services Agreement. Several hundred representatives from around the world are attending the five-day event at the gymnasium.

He continued: “I spent yesterday (Sunday) between church services and public functions talking to all of the persons that I could with respect to the cause of it. I have asked them, I know that they are troubleshooting now to determine. I have been advised that this could be human error and I have a view on that and I am asking them to investigate it to determine what happened and I am too concerned about a Sunday afternoon when people are home.

“When internationally events are taking place at Fort Montagu. Where people of world prominence are in the Bahamas. When Bahamians are home watching sports as they do. But this happened for the second time in a week. That is too catastrophic, too unusual and is deserving of the highest investigation.

“I have been unofficially advised at this point that it’s human error. I want to see what that really means…human error because to me it is just too amazing to have happened twice in a week.”

There have been three blackouts and frequent disruptions in supply for several days. Sunday’s outage followed a weekend of power issues as residents complained of intermittent outages on Friday and Saturday.

Last Thursday, BPL blamed a “damaged underground cable” for blackouts on Tuesday and Wednesday and customers were warned at the time that they might experience “intermittent challenges with their power supply until operations have stabilised.”

When asked about BPL’s challenges last week Mr Davis said: “I have no regrets, because I think BPL is meeting its mandate as we have outlined it.

“The challenge has been we still have the aged engines and we have not been able to address them in the way we had anticipated much earlier. That requires capital. Remembering that BPL is still a Bahamian-owned entity and they look to government for the raising of their capital, therein lies the challenge at the moment. We need to be able to replace the aged engines and that is what is giving us the challenge that we have today.

At around 2pm on Sunday, New Providence was plagued by a power cut. When The Tribune spoke to President of the Bahamas Electrical Workers Union Paul Maynard around 4.30pm, he indicated that the company “had no idea” what caused the problem.

“All we know right know is that several engines shut down at Baillou Hill (power station) and we are trying to get them back on but these engines are old, there is only so much we can do,” he said.

BPL posted updates about the blackout on its Facebook page.

Around 4pm, the company said BPL said teams were working to restart engines and eventually begin restoring power to customers.

“BPL apologises for the system instability issues today and in the past few days and assures you that every reasonable effort is being made to correct the problems. We will continue to update you on the progress of our restoration effort,” the brief statement said.

Around 7.30pm, BPL said it had started restoring power to some areas as it asked for patience, saying the process would be a slow one.

“Despite some challenges restarting engines, BPL has managed to get several units back up and running and has started to restore power in New Providence,” the company said on Facebook.

“We do advise that given the existing system instability, this will be a slow process as we work to restore power without causing another total system shutdown.”

F#$K perry,about investigation. Where is the business plan that we paid $1mil for. Another distraction. Y'all know what the problem is, so what the Fook are you investigating. I am so tired of this clown. It is so frustrating seeing this man standing upright.

TO CROOKED CHRISTIE WE ALL SAY: Stop trying to distance yourself from the very problem that YOU created Mr. Crooked Christie. Yes, YOU Mr. Crooked Christie are responsible for the power outages and yes YOU Mr. Crooked Christie (and the very greedy fuel supplier Sir Snake) already know full well why these recurring outages are occurring with increasing frequency and for longer periods of time. The suffering Bahamian people and ailing businesses are not so easily fooled by your patently false and condescending pleas of ignorance, as if the many years of the now bankrupt BEC's problems created by YOU, and tossed by YOU for political distancing purposes only to the management company BPL, have only just come to your attention. Your efforts Mr. Crooked Christie to deceive the Bahamian people make you look like the corrupt fool that YOU truly are! Yes Mr. Crooked Christie, you are truly an emperor without clothes because the Bahamian people can clearly see straight through that very ornately decorated yellow robe that you now wear to please your corrupt Red China friends.

You really have to be a very stupid person to still support this dolt....

You have to wonder. Does Perry think simply bringing in Americans would make BEC better?

He brought them in to run a company that has been run down for decades. A company that needs all new equipment and all new infrastructure. In other words the only way to get BEC back to normal ops is to SPEND MONEY. There really was never a need for americans to come run it. But that is what he did, Perry hired americans to run our power company. But his first move once they got here was to deny them the rate increase they need to buy the new equipment and to rebuild their infrastructure.

In other words the entire move to bring in the americans was nothing but a show.

Seriously. Anyone who still supports this idiot is a moron.

He isn't worried, he has Solar right? Beyond the reach (and permission) for ordinary Bahamians. Shameless.

Boy das a lot a probes.

I would suggest that Perry take his probe and sh.... never mind, he likes that sort of stuff.

When they had it the same blackouts was happening, so now because someone else has it they probin? hummmm!

Crooked Christie was overheard saying: "Now they want me to be probed just because I said I wanted the blackouts to be probed. Well, let me tell them right now, the only one I'm gonna let probe me is Fweddy Boy!"

What the hell is that??? BPL is a management company, that's it. BEC is still owned by the government. That's like Roberts hiring managers at super value and making the statement, "well I guess the managers are looking to me to replace the damaged conveyor belts". Huh????

Another waste of the peoples borrowed money. BEC/BPL is a pig that you and every other politician created, your monster, yet I and every other Bahamian must pay for your mismanagement. This is getting tiresome and vexing. The state of our electric grid is a direct reflection of the lackluster management of The Bahamas.

You hit the nail on the head!! Power Secure will need 15 years to unravel that mess they call BPL, they are not miracle workers.

I don't blame Power Secure. I blame all the former and current engineering and technical staff that put that hodge podge of a power distribution system together of past 40 years. What we now have is the result of gross negligence and incompetence. Now that Power Secure is here the government has an easy target to attack. Successive governments have failed to deal with the obvious problem, i.e. incompetent people were put in positions that they were totally unqualified to perform, and when the whole specter of political interference is thrown in the mix, the result is the mess we are currently experiencing. Power Secure had no idea what hornets nest they were walking into when they signed the contract. Good luck Power Secure you are going to need it!!!

Successive corrupt governments padding equipment acquisitions, purchasing inferior generators at "superior rates" and skimming off the top is the root cause of Bahamas power crises today.

The records will show every new PLP & FNM government administration immediately took a swipe at "upgrading" BEC. How come with all this investment & upgrades over 4 decades BEC is still dysfunctional?

PLP & FNM milked this cash cow into the ground. Now the chickens have come home to roost!

This is the probe that Perry ordered: