Disciplinary Letters Sent To Mps After Vote To Remove Leader 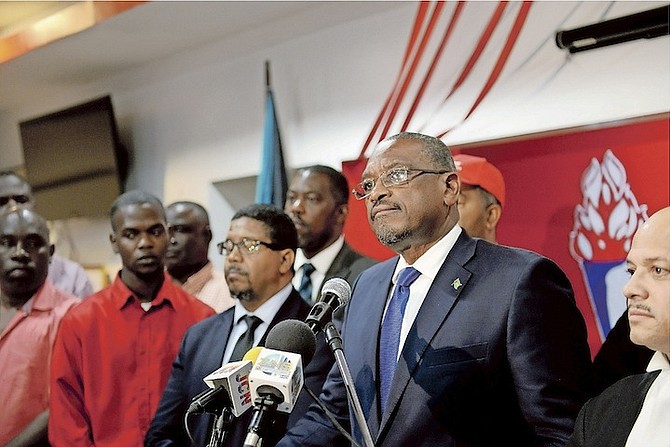 Hubert Minnis, leader of the Free National Movement at the late-night meeting following the vote to remove him as leader of the Opposition. Photo: Shawn Hanna/Tribune Staff

Do you agree with Edison Key that FNM leader Dr Hubert Minnis should resign?

THE Free National Movement drafted and sent letters of charges yesterday to the seven parliamentarians who sought Dr Hubert Minnis’ removal as leader of the Official Opposition in the House of Assembly, formally beginning the process that could lead to their expulsion from the party.

The letters were not disclosed to the media because two of the seven members are expected to receive them this morning, an FNM official said.

The news came as the seven parliamentarians remained tightlipped yesterday in discussing their future and that of the FNM, raising questions about just how well planned their bold move was.

While former Prime Minister Hubert Ingraham fired Cabinet ministers during his era and FNM members like Tennyson Wells and Pierre Dupuch quit the party to run as independents, the FNM has never expelled a member from the party before.

This possibility now hangs over the seven parliamentarians whose action plunged the party into an unprecedented crisis just months away from the next general election.

According to the FNM’s constitution, the seven members will have seven days upon receipt of the letter to respond to the charges against them, either by seeking clarification or by providing exculpatory evidence.

If the Executive Council concludes they have failed to exculpate themselves, it can form a tribunal consisting of three FNM council members to investigate the matter.

However, “among its options,” Carl Bethel, former FNM senator and attorney general, said yesterday, the executive council “could say let (the matter) die out.”

“It’s politics and all things are possible; or (the council) could take the matter to the next step in the constitution,” he said during an appearance on the 96.9 FM talk show, The Revolution.

That step could include the imposition of a fine not exceeding $100, a suspension not exceeding one year or expulsion from the party.

Disciplinary action could be met with resistance, however.

Michael Scott, an attorney who has represented dissenting FNM factions in court before, said yesterday that the party’s constitution is “poorly written” and ill-equipped to deal with disciplinary matters.

“The party’s constitution is not very well written and would not be easily processed,” he said, adding that if the matter becomes contentious, he would be willing to represent any or all of the seven members in court.

Meanwhile, Long Island MP Loretta Butler-Turner said yesterday that she has started to consider who she will appoint to the Senate. The dissenting MPs voted to have her replace Dr Minnis as Opposition leader in the House of Assembly.

Three of the four FNM senators appointed by Dr Minnis - Mr Bethel, Dr Duane Sands and Kwasi Thompson - resigned Wednesday night in view of the developments. The fourth senator, Monique Gomez, said she was going to do so yesterday.

“The governor general hasn’t gotten back to us with official correspondence,” Mrs Butler-Turner said. “That’s what we are waiting on. I am giving (the appointees) consideration, but we are waiting until we get the green light to move forward.”

It remains unclear how Mrs Butler-Turner intends to use her new powers.

After she is officially made leader of the Official Opposition, she could appoint new FNM members to various parliamentary committees, including the Committee on Privilege, the Constituencies Commission or the Public Accounts Committee.

There are also numerous governing responsibilities whereby Prime Minister Perry Christie will have to consult with her before taking action.

Theoretically, for instance, if the need arises Mr Christie would have to consult her on key personnel issues such as the appointment of the commissioner or deputy commissioner of police if those posts became vacant.

If the FNM expels these people for using a DEMOCRATIC process to remove a leader that the ENTIRE country knows failed, the party might as well close down...

If they are expelled I will never vote FNM again.

The only way I would consider voting FNM is if Minnis gives up the leadership of the party and they elect/appoint a viable person who could be PM.

The news came as the seven parliamentarians remained tightlipped yesterday in discussing their future and that of the FNM, raising questions about just how well planned their bold move was.

The bold move was not planned because Neko say they would have to REGROUP. If it was planned there would be no need to regroup unless they plan on replacing Loretta as opposition leader if Dame P ever approve of the move.

Interesting. Andre will regroup that whole COUP because he still feeling the pain from that slap.

Interested to hear the charge since this parliamentary move has nothing to do with the Free National Movement as a political party. While it can arguably have an impact on how people may feel about the FNM, so does the performance of the Party's leader. Are charges being brought against him for that subjective view? Minnis embarrassingly seems not to understand that a leader of a party and a parliamentary leader (whether in Opposition or Government) are two completely different offices altogether that constitutionally, are not linked.

True, I only have a high school education and I understand that those two offices are not constitutionally linked.

Right. Just as people do not understand that being Party leader does not automatically make you Prime Minister if your Party wins. If your Party wins but the majority of MPs on that side advise the GG that another member of the Parliament commands their support, then he or she shall be appointed Prime Minister instead of the person who happens to be Party leader at the time.

Exactly. I’ve always thought that Article 73 was written in a way to trick people into believing just that. It makes reference to "party" two or three times I think.

Yes but remember, Article 73 is in two parts, 73(b) says what happens if there is dispute about who commands the majority of the support of members of the governing side.

Why has there not been a vote of NO confidence in Perry Christie this term????????

The conditions for that are much different, and more difficult.

With their collective years of "service" all of them combined couldn't point to one single meaningful accomplishment!

Why would the electorate want to follow this group of clowns?

You are too stupid SP..

No one disputes that LBT is a big politician with a big loud mouth, but these qualities alone do not make her suitable for any kind of effective leadership role in Bahamian politics today or tomorrow. LBT's innate political instincts are insufficient in relation to her over-sized ego and grandiose sense of entitlement to one day sit on the high throne of Bahamian politics. But she deserves no coronation by Bahamian voters given that she is clearly unable and/or unwilling to achieve anything substantial in the political arena by well thought out reasoning combined with shear power of political persuasion and popular appeal. Time and time again we have seen her resort to instigating disruption in an effort to compensate for her intellectual limitations and unstable emotions. The last thing we need now is a political leader who is much more similar to Minnis than she would like to think, especially when it comes to holding grudges, having way too many axes to grind and possessing great fondness for the more skullduggery aspects of yesterday's style of very destructive politics. Neither Minnis nor LBT are the answer to the hopes and aspirations of the Bahamian people for a better tomorrow. LBT must therefore be knocked off of her fleeting momentary high perch to join Minnis in the rubble of failed politicians with no political future.

In my views, I think this is the best move within the party what the seven did. Minnis has no balls just spiteful actions he displays within the walls of the FNM. Congrats on the appointment as Opposition Leader Loretta! People just afraid of transparency. Everyone wants change but when it happens they switch their views and opinions.