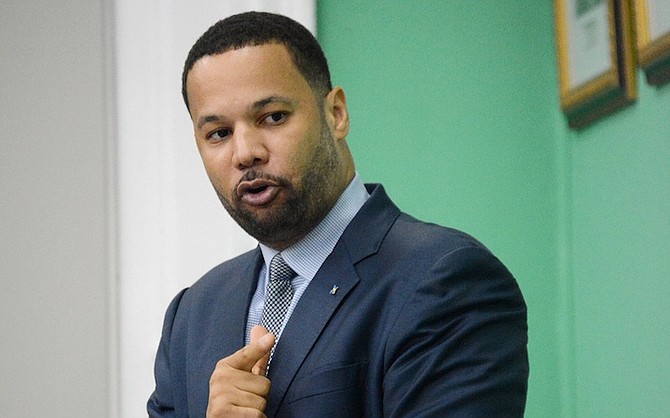 Do you agree with Edison Key that FNM leader Dr Hubert Minnis should resign?

FORT Charlotte MP Dr Andre Rollins says it was “irrational and selfish” of Free National Movement (FNM) Leader Dr Hubert Minnis to request that the “rebel” seven members or Parliament who ousted him from the post of Opposition Leader in the House of Assembly resign, as he suggested the Killarney MP had a “lust for power”.

Dr Rollins was frank when it came to the group’s game plan and revealed to The Tribune on Friday that he hoped their bold move in the House of Assembly on Wednesday would lead to senior FNMs successfully calling Dr Minnis to a series of closed-door meetings with the intention of helping him to realise what was important.

He defended their actions as a move that “spoke truth” in acknowledging that the parliamentary Opposition had suffered from an “inexcusable lack” of competent leadership.

“Asking for the resignation of 70 per cent of your representation in the House of Assembly is irrational and selfish," Dr Rollins told The Tribune. "I am hopeful that senior, respected members of the FNM will be successful in calling Dr Minnis into a series of closed-door meetings with the intention of helping him to realise that the welfare of the party is far more important than the lust for power.”

The MP said seeking to reduce the Opposition’s presence in Parliament to just three of 38 seats was not the best course of action. He went on to accuse Dr Minnis of swearing that he would break up the party if there were any attempts to remove him as leader.

This comes after Central and South Abaco MP Edison Key told The Tribune on Thursday that Dr Minnis could not force him out of the party and Central Grand Bahamas MP Neko Grant’s “respectful” rejection of the leader’s request that they all resign.

Dr Rollins continued: “Dr Minnis recently advised me that if there was any attempt to remove him as leader he would - and I quote - 'break up the party'. I want to publicly ask Dr Minnis, in light of his irrational request for the resignation of practically the entire FNM parliamentary team, whether he still intends to 'break up" the FNM party?

“I believe that I can say without fear of contradiction that none of the seven, several of whom have been members of the FNM far longer than Dr Minnis, is motivated by any selfish desire to 'break up the party'. Our mission is to speak truth to power, whether it be in relation to the governing party or the opposition, for the purposes of promoting the advancement of our country.

“Our actions yesterday spoke truth in acknowledging that the parliamentary opposition has suffered from an inexcusable lack of competent leadership and serious change is desperately needed for the sake of our country and the Bahamian people.

“Therefore, I will be recommending to my parliamentary colleagues that we seek to join senior figures within the FNM in a closed-door meeting with Dr Minnis to determine the best course of action for the party under these difficult circumstances. Seeking to have your party's representation in the House of Assembly reduced to three out of 38 seats, or less than 10 per cent, certainly does not qualify as the best course of action.”

Dr Minnis was blindsided by the seven MPs when House Speaker Dr Kendal Major revealed on Wednesday morning that they had submitted a letter of no confidence in the Killarney MP and revealed that they voted to have Long Island MP Loretta Butler-Turner be the new Opposition Leader.

This letter was also sent to Governor General Dame Marguerite Pindling, who has to officially approve the request. On Sunday afternoon she will formally present the Instrument of Appointment of Leader of the Opposition to Mrs Butler-Turner at Governmnet House.

On Wednesday night at the FNM’s headquarters following the stunning move by the rebel seven, Dr Minnis called on the MPs to do the honourable thing and resign from the party or face disciplinary action.

Speaking to a raucous crowd of supporters, Dr Minnis said he thanked God that the MPs launched their plot before the party was victorious at the 2017 polls, as their actions would have destabilised the government.

He called the plot a “stunning usurpation of the very essence of the democratic right of a political organisation to determine its leadership.”

Likening the party to a sea-faring vessel, he said that the ship has already left the harbour and no “mutineers” will stop its course towards Government House.

None of the dissident MPs were present at the meeting.

It obvious the dissident seven are clueless of what their action says. It shouts, the hell with the FNM constitution and the hell to the delegates who voted for Minnis.

This is not looking good...

No one disputes that LBT is a big politician with a big loud mouth, but these qualities alone do not make her suitable for any kind of effective leadership role in Bahamian politics today or tomorrow. LBT's innate political instincts are insufficient in relation to her over-sized ego and grandiose sense of entitlement to one day sit on the high throne of Bahamian politics. But she deserves no coronation by Bahamian voters given that she is clearly unable and/or unwilling to achieve anything substantial in the political arena by well thought out reasoning combined with shear power of political persuasion and popular appeal. Time and time again we have seen her resort to instigating disruption in an effort to compensate for her intellectual limitations and unstable emotions. The last thing we need now is a political leader who is much more similar to Minnis than she would like to think, especially when it comes to holding grudges, having way too many axes to grind and possessing great fondness for the more skullduggery aspects of yesterday's style of very destructive politics. Neither Minnis nor LBT are the answer to the hopes and aspirations of the Bahamian people for a better tomorrow. LBT must therefore be knocked off of her fleeting momentary high perch to join Minnis in the rubble of failed politicians with no political future.

So if not LBT then somone else. I refuse to believe a failure like Minnis is the best the FNM can do. If it is the best the party can do then close it down, sell the building and let it fade into history.

I will not vote to replace one failure with another failure. That does not make any sense.

The PLP don't have a leader as well but you don't see them fighting like cats and dogs. The problem isn't Minnis the problem is some FNM's who was in the party before Minnis feels like he's johnny come late and he don't deserve to be PM. If you ask me we don't have no good choice of prime ministers in the up coming election. Minnis neither Bran was ever PM so they don't have a record but Christie do. When you speak of Hubert Ingraham he was by far the BEST leader of FNM and PM this country had.

My fellow Bahamians stop being willfully ignorant and spreading misinformation. Despite 'traditions" The Bahamas constitution indicates the following: 1. Just because you were elected as your party leader does not automatically mean you have a right to lead your party in parliament in the position of "leader of the Opposition in parliament" if your party loses the election, or as "Prime Minister" if your party wins. 2. Being a member of parliament actually means something. Power doesn't rest solely in the hand of the party leader - despite the growing veneer of dictatorship in the role. The elected members of parliament decide who will lead them in opposition and who will lead as Prime Minister. For example if PGC is the leader of the party that wins the most seats in an election and the majority of his comrades also elected decide that they don't want him to serve as PM but Gibson, then that majority could make their desires known. PGC would remain leader of the PLP party but would NOT lead the government- Gibson would. This means several things: 1. The act of the seven was a democratic one enshrined in the constitution.2. Party politics and party constitutions do not supercede the rules of the Bahamas Constitution. Meaning keep your petty internal politics to ya damn self. We regular non-party member Bahamians are SICK a ya'll willfully blind political sheep. 3. Minnis can be leader of the FNM but that does not automatically make him leader of the opposition in parliament. 4. Minnis can be leader of the FNM but that doesn't mean that he would become PM- if the FNM won the next election. 5.Just because LBT is leader in the house does not make her leader of the FNM- or ensures that she will become leader of the party. 6. She can become prime minister without being party leader. This is why ya need to stop voting for party and think about who these people these party send to you really are! And once again- ya'll need to separate party politics form Bahamian governance! 7. It also means that the PLP is as weak as the FNM and all its members are responsible for the state of affairs for the country. I will remember these things at the polls. Members of parliament continue to support a leader who is lacking when they have been empowered to come together and choose someone else. Only thing that stops them- is self interest- all of em have the same ambitions as LBT but ironically they lack the cahones AKA balls to make their intentions known. A bunch of cowards scared to be separated from the teat of the public purse. I am sick of cowards and every one of our parliamentarians - except seven- are complete cowards.

We have come to a cross road in our political life here in the Bahamas. There is a sense among many who voted FNM previously that the FNM has morphed into an organisation that is too much like the PLP. Consequently there is a level of distrust and, thank God for the recent happenings because there are many who would now vote other than the two main parties now that the DNA has been strengethened by Mrs, Butler-Turner. Both of the main parties are preceived to have abandoned the Bahamian people. Only looking out for a small portion of known party supporters and their families. One recent insident as an example is when Mr. Turnquest the deputy leader of the FNM clearly came out against supporting the 600 workers who lost their jobs. Instead it seems he cautioned the union against their effort to help when made a legal move to help the workers retain their jobs. Both the major parties are preceived to have no empathy for the majority of Bahamians, and only know that they exist at election time.