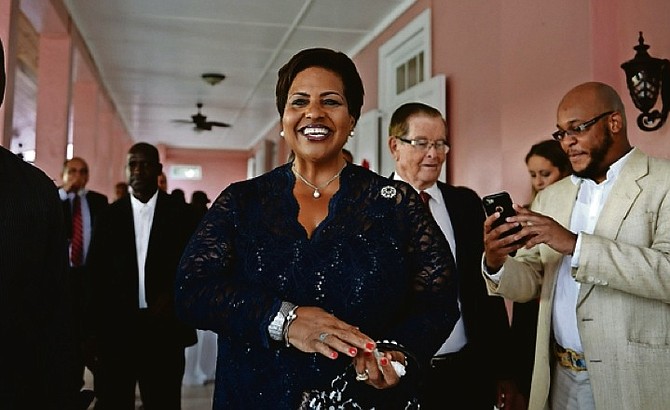 Loretta Butler-Turner accepted her instruments of appointment to become the first woman to serve as leader of the official Opposition on Sunday.

HINTING at new and unexpected possibilities for the country, Long Island MP Loretta Butler-Turner yesterday accepted her instruments of appointment to become the first woman to serve as leader of the official Opposition.

While she noted the historic first, Mrs Butler-Turner stressed that greater significance lay in the conviction expressed by herself and her parliamentary colleagues for a new direction in the country.

“Today is about the collective judgment and the sincere beliefs of the majority of the duly elected representatives opposed to the government of the day,” she told those attending after receiving the instruments from Governor General Dame Marguerite Pindling.

She added: “We stand on a firm and tested democratic foundation, history will judge our intention and our resolve.”

After the ceremony, when pressed for details on the next move for herself and the six Free National Movement parliamentarians who ousted Dr Hubert Minnis as leader of the Official Opposition in the House of Assembly last Wednesday, Mrs Butler-Turner replied: “Stay tuned.”

The FNM has charged that the parliamentarians have brought the party into “disrepute, division, rancor and dishonour,” according to a letter about disciplinary proceedings that may be launched against them, obtained by The Tribune.

Mrs Butler-Turner said she and her colleagues would issue a response to those charges by today.

When asked whether the resulting dispute will affect efforts to mount a strong Opposition in Parliament, Mrs Butler-Turner said: “I seriously doubt that, we know what needs to be done in the House. We’ve watched for a long time as the Progressive Liberal Party has done many things that the Opposition has not stood up to strongly enough, and so our position in the House will be very strong.”

“We have done absolutely nothing undemocratic or unconstitutional,” she said.

Asked about her efforts to mount a strong opposition in the context that Dr Minnis was still the leader of the FNM, and if successful, would become prime minister after the next election, she said: “I think a lot of that is hinged on the response that we get from the party itself and so as we move forward very quickly those determinations will be made.”

Democratic National Alliance Chairman Andrew Wilson, and the third party’s candidate for Elizabeth, Prodesta Moore, attended the ceremony amid reports that the “rebel” FNM MPs are negotiating a coalition with the DNA.

For his part, Mr Wilson said he wanted to witness history in the making.

To this, Mrs Butler-Turner said: “Rumours are simply that - rumours.”

Mrs Butler-Turner named North Eleuthera MP Theo Neilly to replace Bamboo Town MP Renward Wells as leader of opposition business in the House, but was tightlipped over Senate picks slated for release “within the next 24 hours.”

“New appointments is only one of the tasks that we have at hand. We also need to ensure that we have a person on the Boundaries Commission, we have an opportunity to do that.

“From a statutory and constitutional position there is much work to be done and we will not wait to draw it out. You will see immediate things happening within 24 hours.”

All of the MPs who called for Dr Minnis’ removal, except Central Grand Bahama MP Neko Grant, were present at yesterday’s ceremony.

And if Dr. Minnis really understood the world "democracy", which he seems to use a lot, he would resign as head of the FNM. The Westminster system is quite clear on this, yet somehow in the Bahamas, we seem to like to make up our own rules.

I agree with Dilly Tree .............. Perry nor Minnis either do not have any shame or political etiquette to understand when they have failed .......... Perry presided over two failed referenda and did not resign and Minnis' colleagues have carried out a constitutional VNC ......... and these two jackasses are still sitting up in the House "big as billy" ............ We have a serious problem with our senior politicians who have no grace or no sense of Westminster protocol

I don't regard David Cameron in the UK as the best Prime Minister that country has ever had, not by a long margin but at least the guy had the decency to walk away from office after his BREXIT referendum defeat. It is called a matter of honour. Christie should have resigned his post after a second referendum defeat and Minnis should resign as Party Leader given his abject failure to unite the FNM over the last four and a half years. Why are these two so desperate to cling to power? In the name of God just go, both of you. The country has suffered enough.

On second thoughts Christie should stay to allow the electorate to humiliate him at the polls. He deserves to suffer a humiliating defeat as a punishment for his Party's complete destruction of our economy during these last years. Never have so few caused so much pain to so many.

She looks very nice here!! Glad she took the step to get her weight down.

That said I've had enough of this carp about "history", but I guess all "history" isn't good, there was Hitler

Sir Milo must be rolling over in his grave! From his loins eventually came this most unfit political buffoon who is guaranteed to have a short political life. Why are we Bahamian voters so persistently damn gullible and stupid, setting aside our D- education?!

It's the D- masses that voted for Perry and his merry band of corrupt jackals, so not sure who you are railing against here.

For a "political buffoon", I'd say Loretta Butler-Turner has done rather well. It takes courage and determination to go against everything she grew up with in a staunch PLP household and decide to go her own way. Who is the gullible and stupid one?

You'd think after Brexit and the US elections people would catch some sense and realize insulting masses of people to bring them to see things your way never works.

I hope if this continues you won't be one of those individuals crying on camera like Hillary supporters were when she lost and calling those who voted against what you did, stupid and ignorant. That only shows YOU to be the ignorant one.

Mrs. Butler/Turner remember he or she who laughs last, laughs best. I think you and your cohorts will go down in history as the group that totally destroyed any opposition to the PLP. But laugh now, and you and the entire country will definitely cry later. Well done. 2017 is done and by 2022 there will not be a viable country to run. You have succeeded in your mission. Congrats.

Hubbigity, Crooked Christie and the Dimwitted Doc are all from Pindling's school of thinking when it comes to gaining and retaining absolute control over the leadership apparatus of their political party, thereby capitalizing on one of the key weaknesses within our ill-suited system of government. Bahamians need to wake up to the fact that the political parties will always serve the hijacker's interests in obtaining unchecked power, with no built-in party mechanism for booting the hijacker when necessary for the good of the party and the Bahamian people.

Tear up our outdated Constitution and go in a federal republic direction ............ the (out island) colonies need to gain their independence from Nassau

Comrades! DNA Leader Bran is the guest now live-on the Guardian's The Revolution Talk Show. Every red shirt, needs tune-in live to hear for yourselves exactly what the green party's leader and your Loretta has planned for your red party. Will be good be reminded directly from mouth man himself, all about his runaway ego.