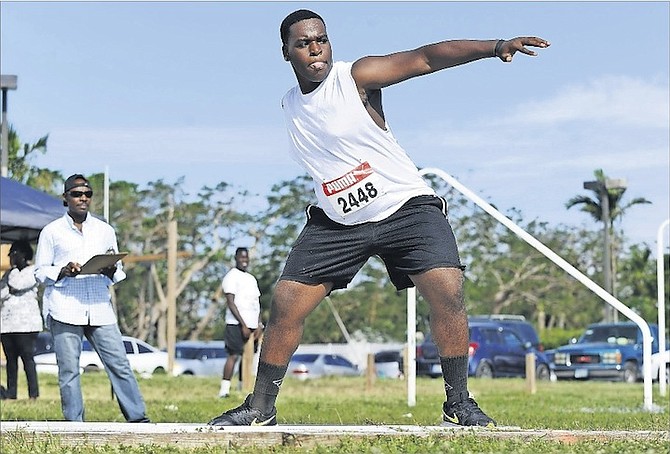 ATHLETES compete in the RC Athletics Throwers Meet at the University of the Bahamas field on Saturday. Photo: Kermit Taylor/Bahamas Athletics

TWO athletes closed out the year on a high note as they attained the qualifying standards for the 2017 Carifta Games as they competed in the RC Athletics Throwers Meet at the University of the Bahamas field on Saturday.

Both athletes represented the Blue Chips Athletic Throwers Club that was formed a year ago under the direction of Corrington Maycock, now a IAAF Level II certified coach.

Their performances, among the others from the large number of competitors who competed in the offseason meet, left meet director Ronald Cartwright beaming with excitement for the upcoming season that will get underway on Saturday with the Bahamas Association of Athletic Associations’ Odd Distance Meet at the Thomas A Robinson Track and Field Stadium.

“I think the meet went very well,” said Ronald Cartwright, the head coach of the RC Athletics Throwers Club. “We had a lot more competitors than we had in the past, so that is a good sign. It’s very encouraging to see how many athletes are taking the throwing event so serious.

“And from the meet, we had two persons who did the Carifta qualifying standards. I was really pleased with that. I think as the season progresses, we should be able to see a lot more throwers qualifying for Carifta because they now have a base to work with during the offseason.”

Lewis said all of the hard work during the offseason is paying off and he’s gotten off to a great start, having qualified in the discus. He credited the competition he got for him attaining the standard so early.

With his best throw coming on the fifth of his six attempts, Lewis won over Isiah Daxon, who did 38.16m on his third attempt for second place. Tristan Sherman got third with 32.32 on his first attempt.

The order was reversed in the shot put as Daxon pulled off the win with 12.51m on his first attempt over Lewis, who did 12.04m on his sixth attempt. Kevin Sears got third with 11.73m on his third attempt.

“I’m so glad that I qualified,” Harris said. “I came out here to do much better than I did, but I am satisfied with what I did.”

“The competition was good. I know now what I have to work on and I’m going to do that in training so that I can get the qualifying standard too,” Harris said.

Some of the other performances of note came from Annamarie Oriaki, who dominated the girls under-14 division, winning the triple crown in the shot, discus and javelin.

Dachye Stubbs was a double winner in the girls’ under-18 shot and discus as was Selena Brown, the older sister of collegian Serena Brown in the open women’s shot and discus.

Johnny Jean-Jacques won the boys under-20 shot and discus

Cartwright said that while they have not been able to generate the kind of funding necessary to host their throwers meet without a gate receipt, he said the response could be a lot better from those persons who wish to come out and cheer on the throwers.

Here’s a look at the results posted at the meet: