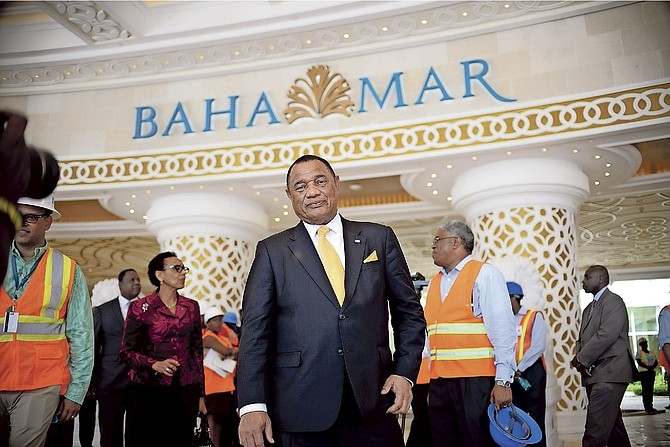 Mr Christie did not disclose the sale price, adding that the negotiated agreement between CTFE and the resort's secured creditor, China Export-Import Bank, were still sealed by the court.

Under its original developer Sarkis Izmirlian, the resort was slated to open in December, 2014. After repeated missed deadlines, Mr Izmirlian filed for Chapter 11 bankruptcy protection in the United States in June, 2015. The government vigorously opposed this process, saying it threatened the Bahamas’ sovereignty, and instead petitioned the Supreme Court to place Baha Mar into liquidation.

Baha Mar’s bankruptcy cases for its Bahamian entities were later thrown out of the US court.

Mr Christie told the House of Assembly: "The government and I remain focused on obtaining three main objectives: firstly, ensuring immediate remobilisation and resumption of construction based on committed funding sufficient to complete construction and to open all parts of the project; secondly, the opening of the casino, casino hotel, convention centre convention hotel and golf course prior to the end of the 2016/2017 winter season.

"Thirdly," he added, "settlement and or payment of all valid claims of contractors and subcontractors suppliers and employees and other Baha Mar and CCA creditors."

Following the Prime Minister’s announcement, Graeme Davis, the President of CTFE’s Bahamas subsidiary, said in a press statement that the company will ensure Bahamians benefit fully from the project. This will be seen in the recruitment of employees for the casino beginning in the New Year, CTFE said.

“CTFE will dedicate significant, ongoing investment and resources towards the pre-opening and opening of Baha Mar Resort,” the press statement said. “We will also ensure that the Bahamian people and the region benefit fully from the project, which will create tremendous job and economic stimulus opportunities. Further, by combining our global hospitality expertise with the vibrant and authentic Bahamian culture, we will create a memorable, unmatched experience for guests of which all Bahamians can be proud.”

In addition, CTFE said it is in discussions with several globally recognised hospitality brands to be luxury hotel operators at Baha Mar including Grand Hyatt, SLS Hotels, and CTFE subsidiary, Rosewood Hotel Group.

To prepare for the opening of the casino hotel and casino, CTFE said it is putting together a leadership team of executives from internationally recognised brands.

Not news everybody knew they were the buyers.Number boys got competition now. Better learn to speak manderine.

So while Minnis and Loretta those fighting over leadership, The PM make the long awaited announcement. Drop the bomb on them.

Exactly, while they doing crap, the PLP gonna push a ton of stuff through

There is no fight over the leadership in the House.

Minnis has already lost the leadership in the House just as the FNM will if he stays leader.

No the 7 will not allow things to slip by like Minnis and Turnquest always did.

LBT and Bran, those two can hold the PLP's feet to the fire.

Minnis and his "wimpy" side kick Turnquest were no match.

I guess the AG is in the background scoping out her family's shops in the resort... you know, with her having no conflict of interests at all

If the sale has now been confirmed what possible reason is there to keep the details of the sale (and other concessions) under court seal? Oh stupid me, forgot about the looming election. The electorate won't get sight of the details until late next year (and possibly never, if the PLP are returned to government)

I do not agree with your apparent belief that we have no government at this time. The Bahamas has a government until such time that the Crooked Christie-led corrupt PLP government is replaced by another government. I do agree though with many Bahamians who now believe that getting rid of Crooked Christie should be done asap rather waiting on the next general election. The fact that there has been no sunshine at all on the various deals Crooked Christie has allowed himself to be coerced into making with his Red China friends for his own political survival, and the financial gain of members of his family and his cronies and their family members, will be sufficient grounds alone for the next government to rescind all of those tainted deals that wrongfully and unjustly rob the Bahamian people.

I am debating; should I learn Mandarin or Cantonese. We done sold our souls to the Chinese.

"Mr Christie did not disclose the sale price, adding that the negotiated agreement between CTFE and the resort's secured creditor, China Export-Import Bank, were still sealed by the court." This is bullshit? What court? Why? What are the terms since the Bahamian people holding the bag. PGC- it is crap like this that we are sick of.

Mudda take sick all of the great and revolutionary occurrences in the Bahamas has the PLP stamped all over them. Never mind the FNM's and " pretty boy" Bran they say what they say because they want the job. They do not have one single original idea in their heads .Empty barrels making noise.

Butler Turner, Minnis and Bran are confusing their followers. Who is in charge? and what is the name of their party. ? DNA.FNM What.? The blind leading the blind.

Small wonder the ruthless dictator, Crooked Christie, worships the likes of Mugabe and that other one, Fidel, who is thankfully now deceased.

Hubbigity, Crooked Christie and the Dimwitted Doc are all from Pindling's school of thinking when it comes to gaining and retaining absolute control over the leadership apparatus of their political party, thereby capitalizing on one of the key weaknesses within our ill-suited system of government. Bahamians need to wake up to the fact that the political parties will always serve the hijacker's interests in obtaining unchecked power, with no built-in democratic mechanism for booting the hijacker when necessary for the good of the party and the Bahamian people. This explains why Pindling was not toppled by the findings of the 1980's Commission of Inquiry into his drug smuggler dealings, why Crooked Christie has refused to step down after two national referendums in which the Bahamian have expressed a resounding vote of no confidence in him, and why the Dimwitted Doc is able to hold on to his leadership of the FNM party.

Comrades! STOP WHAT YOU'RE DOING! DNA Leader Bran is the guest now live-on the Guardian's The Revolution Talk Show. Every red shirt, needs tune-in live to hear for yourselves exactly what the green party's leader and your Loretta has planned for your red party. Will be good be reminded as Minnis did, directly from mouth man himself, all about his runaway ego.