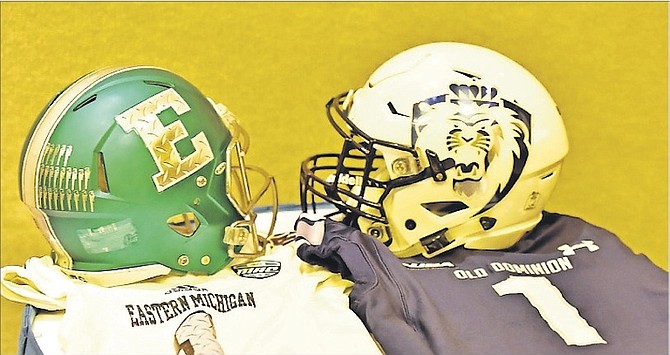 THE 2016 Popeyes Bahamas Bowl will add another chapter to the budding rivalry between the Old Dominion Monarchs and the Eastern Michigan Eagles. When the teams meet at the Thomas A Robinson National Stadium at 1pm on December 23, it will be their third meeting in three years. Old Dominion has the edge in the head-to-head matchup thus far. In 2014 they scored a 17-3 victory, followed by a 38-34 win last season.

THE Popeyes Bahamas Bowl continues to bridge the gap between its participating teams and the local community through various initiatives, highlighted by its Youth Football Clinic.

This year’s edition of the clinic is all set to be hosted December 21 at the Roscow AL Davies soccer field and plans to host over 200 aspiring football players between the ages of seven and 13.

Registration begins at 2pm and the clinic runs from 3pm to 4:30pm.

A combination of coaches from USA Football, Commonwealth American Football League participants, and players from both teams – the Old Dominion Monarchs and Eastern Michigan Eagles, will facilitate the event.

The Popeyes Bahamas Bowl Committee has partnered with the local governing body for football, the CAFL, as the clinic looks to expand its reach and develop simultaneously with the game.

Richard Giannini, executive director of the Popeyes Bahamas Bowl, said his committee considered the clinic its “number one priority” when it came to fostering a relationship with the local community.

“Our number one priority is our Youth Football Clinic. That is our most important outreach at this time. The CAFL is going to help facilitate youth at that event as will continue to try to make that bigger and better and get many more involved in that clinic,” he said.

“Secondly with the exposure that we bring with major American college football, it will provide the interest for these young potential football players and make the most of whatever opportunities they have on the island. Interacting with the youth is very important to us. Our primary goal is to establish that clinic and we will do some things moving forward as it grows in the future.”

While both participating teams in this year’s bowl look to make history for their respective schools on the field, it also presents an opportunity for them to take advantage of valuable life experiences within the Bahamian community.

Eagles head coach Chris Creighton said he looks forward to the off field initiatives like the clinic to positively impact his team.

“My vision for our football programme has always been to make playing at EMU one of the most incredible experiences of our guys’ lives. Winning and winning championships is a part of that but at the very core I think it is about two things – life long relationships and new experiences,” he said.

“So to be able to bring all of Eagle Nation football out of the country to the Bahamas, I can’t tell you how much that means for our guys to be able to experience to meet such an incredible country and the people who inhabit it. We are going to come to visit paradise but I’ll tell you we’re also going to do everything we can to spend time with people and build relationships.”

“It presents a great opportunity for our young people to learn more about American football, and many of them I imagine will be participating in the sport for the first time,” Kelly said.

“They will also have an opportunity to see and hear first-hand how sports can play a major role in learning self-discipline and put them on the path to receiving a college education.”

The clinic is in conjunction with the participating teams’ annual visit to the Ranfurly Home for Children.