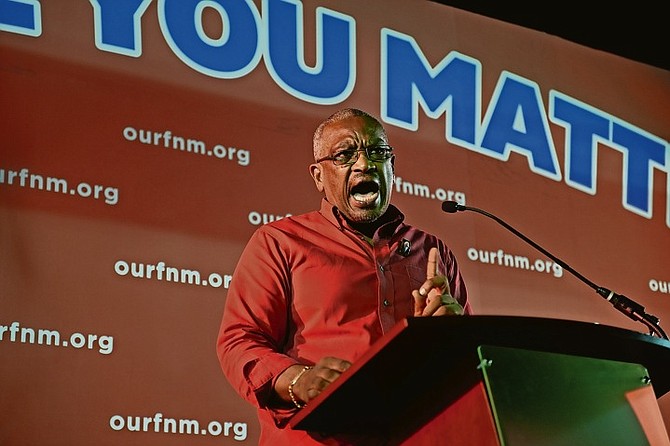 One of his final messages to the crowd of several hundred gathered at FNM headquarters, his announcement, for many in attendance, climaxed an event that was transformed from a typical candidate ratification into a loud, defiant show of strength amid unprecedented crisis for his party.

“You did not deserve what those seven MPs did to us,” Dr Minnis said, referring to last week’s decision by his colleagues to oust him as leader of the Official Opposition.

“You did not deserve it.”

In interviews with The Tribune, FNM supporters said the “rebel seven” acted as they did because they were motivated by greed.

Dr Minnis’ criticism of them, accordingly, received the greatest reception from the crowd.

“Didn’t we all endure their public criticism?” he asked. “It seems like almost every week we were being publicly attacked by one of our own.

Dr Minnis said he extended an olive branch to those who opposed his leadership, a claim likely to be disputed by several “rebel” MPs who may feel that they were denied nominations because of their support of Mrs Butler-Turner.

“The FNM has a leader,” he said. “My name, my name is Hubert Alexander Minnis.”

“FNMs, we can’t afford to be distracted. We have a country to rescue. The PLP hit the Bahamas like Hurricane Matthew did, hard and merciless and the damage is growing day after day.”

Dr Minnis asked: “Do you think we have time to be fooling around with those outgoing MPs when our people are dying on the streets, losing jobs, losing their homes, unable to pay their light bills, unable to send their children to schools, unable to receive proper medical care?”

Mr Lewis is the head of the Grand Bahama Amateur Athletic Association.

Among others, former Senator Dr Duane Sands spoke during the rally amid interest in where his loyalties lay, either with his former running-mate, Mrs Butler-Turner, or with Dr Minnis.

“I support the leader of the party,” he said during his speech.

No Surprise there! Now we wait to see what will happen next

Crack pipe Rock with Doc is just a light weight scumbag PLP, only 50% corrupt, when he's 100% corrupt only then will he be allowed to be part of them. When his heart completely turns to black, and his soul is fully occupied by one of Satan's demon, then and only then will he be a true PLP devil. You MF-ers love bullshit gossip, and using words to misled the uneducated, but I tell you this, on Jan. 9th your lives are going to change forever. The UBC is going to give you two choices, join us, or you will be exposing yourselves to us that you don't want change, so that must mean your one of the scumbags that is stealing from us. In the Mideast a thief like you would have his hand cut off, second time, the other hand, third time hanging; every PLP would be on a rope if they were in the Mideast.

Congratulations to Perry on 5 more years...

You need to change your name and chill 4 real. You on here running on everyday with shit. You need to catch yourself.

YOU ARE NOT HELPING!!

This dimwitted tyrant and those who choose to cling to the party he has hijacked are going nowhere. His political wings have been clipped but good....he will now flounder around on the ground for a while making more noise than a squawking albatross suffering from excruciating labour pains, but thankfully he will never fly again over our country's political landscape!

SAYONARA Doc......ya never ever had what it takes to roc !

Comrades I pose but three questions.
When is Minnis going wake-up to Dr. Duane's "see him do his backstabbing moves before" dance steps?
Will it be the Red Party's general membership and supporters who will be the ones to decide if its them or The Queen and Her Majesty's Westminster system that gets to pick their party's Leader... cause right now the red party's leadership process is being royally screwed?
How much longer will they sit on their hands and asses, while the Green Party's Bran acts out the role as the Loyal Opposition Leader up in the Red Senate Chamber?

who is surprised? Also, why are people raging at Minnis? Sure he's incompetent and has no policies but he beat Loretta fair and square 3 times. I honestly don't understand why this is taking so long to get through Loretta's skull. Form your own party or Join another. IS this brain surgery for people to get? If you don't like one party or it's leader then look elsewhere.

Both LBT and Minnis have destroyed the FNM as both seem driven by ego and personal interest in being a PM. I stand in support of neither and I honestly could care less what happens to either of them. Personalities will not save this country, policy, planning and action will. Unless someone emerges with a platform to do that, with good ideas that are based in reality, they would have my confidence and vote.

Hehehehehehehehehehehehehehe. . .dis big Papa aye. . .float like a butterfly and sting like a bee. . .being straight-up. . .what a breathe of fresh air after being "stuck" with this closed-minded buncha "reds" who won't' be honest in their assessments or just plain lying or they think everybody in the public is stupid! Lol!

"Fair and Square".....yeah, in a nation where women don't even have equal rights.....Your a complete a$$hole, you PLP scum.

"Your a complete a$$hole" You mean You're* I voted in support of the referendum and to also accuse someone of being PLP scum after saying that further shows your own stupidity... considering the PLP brought about the referendum in the first place.

Also, I support neither party and I care very little for party politics when both sides have shown themselves to be absolutely incompetent, and devoid of proper policy/planning. Take your tears, that butthurt and your salt somewhere else sir to someone who gives a crap.

You A$$hole, go smoke your crack like the addict you are. The only thing you support is your pusher.

My dear Lord what a bunch of ::"Cut Throats" now Sands says he supports the Leader this crew can kill. The truth is real If any one in their right mind thinks the Bahamas is bad off. Put that crew the "Roc with Doc" or the starring with Butler Turner in charge. and the Bahamas would be a million times worse. Butler Turner has lost her nomination and Sands the Doc who does not care about poor people is very careful not to lose his cunning like a fox.

He's the one fooling with them , expulsion will take forever. Unfocused Minnis.

Both Comrades Loretta and the green party's leader loyal opposition in the red senate chamber have been relentless in calling for the PM to be more transparent with the people over the Baha Mar deal with Chow Tai Fook Enterprises....yet the reds and the greens have no damn clue what these two power hunger politicians are up to?

5 more years of financial ruin for this country.

Comrades not to be hash on Loretta when I thinks world of her late grandfather's contribution to The Bahamaland...but I don't remember her and loyal sidekick Dr. Duane ever fulfilling their previous promise to release their"plan for the country" that they repeatedly had promised to release prior to the start of red party's July 2016 convention?
Whatever happened Loretta's other failed leadership supporter....Darron cash?
Comrades shouldn't it put a dimmer on your "hope for the country message" at least until the restoration of your previous remaining a mystery plan...more so when its attached to your Coup de théâtre manifesto?
And....I hasn't yet got around asking serious questions about the green party's leader assuming the leadership role of the loyal opposition's business in the red upper chamber senate.

It's a mess alright!

You go Doc!
By the way the background in the picture says "ourfnm". You mean "yourfnm" because it sure isn't mine and many others anymore.

But you don't have to worry because the ones who have lost faith in the FNM, because of you, are the young upwardly mobile and they are the ones leaving the country.

Comrades! Loretta's style leadership politics will continue be suspect by the good people Long Island, Montagu and all constituencies voters as long as she continues thinks she doesn't have to provide a realistic accountability to her constituents and the people the Bahamaland at large as to why she not only forced the party to spend hundreds thousands dollars of their cash strapped party's moneys to force a leadership convention, only to run away the night before she was to have faced the verdict of the 410 voting delegates? Has she no respect at all for her own red party's 410 delegates democratic right to pick the party's leader?
And....Long Islanders having just been beset latest grief to openly talk about their MP running to The Queen, only to use her suddenly acquired royal instruments to appoint the green party's Bran to be put in charge Her Majesty's Loyal Opposition up in the red upper senate chamber.
Sweet Jesus, there's limits BS that Long Islanders can walk around loaded-up with, before it becomes taxing on the ass.

I speak from experience (and from watching their money wave bye-bye). The Bay Street Boys have moved on. Panama. They got what they wanted out of the Bahamas, and now their chairs are occupied by the numbers men. Same story - Bahamas and Bahamians pay, but now the country is being raped by native Bahamians.

Now that that is over I see LBT joining forces with the DNA. I think she have the same mentality as Bran did with Ingraham (payback) but for the sake of the Bahamian people I pray the PLP don't win this next election.

Comrades it has been long known that the two former law partners not only have remained close friends but that Papa Hubert regularly communicates the PM on the phone and in person being the former PM likes being kept in the mix by his former law partner.
That there is little PLP governing that goes on without some input by the former PM. The two former law partners share the same small circle close friends.
I have no doubt that Papa Hubert, knows more about the sale of Baha Mar to Chow Tai Fook Enterprises, than PM's own attorney general that he says lead the negotiations for the supposedly sale Baha Mar.
The total opposite can be said of the cold relationship that has long existed between Papa Hubert and Minnis...And as for Loretta, Papa has never seen her as his equal....so I am at a loss if Papa Hubert is being kept in Loretta's and Bran's fantasy loop? I for one can't picture Papa Hubert partnering up with Loretta and Bran...but who hell really knows....it's politics...right?

Lucifer stands a better chance of achieving Sainthood than the Dimwitted Doc does of ever becoming PM of the Bahamas!

Are you sure your name is not Sheepf%^$#r, so ugly that a woman won't even touch you, so you have to rape sheep's instead? Broletta, I cant tell your one of those a$$holes that follows every stupid reality show in Hollywood. You live your life by what Hollywood tells you to do, your a complete F-ing idiot. A PLP piece of human crap who enjoys watching their own people suffer.

Goodbyebahamas ................ what a sorry name for a commentator on this noble media site founded by a true Bahamian patriot (Sir Etienne Dupuch) ........ he would have banned you instantly

Besides being a topic of interesting discussion, why the hell would anyone care about the FNM?

Do you suggest we vote for viable Independents????? ...... Who will take that chance to run against the establishment parties this time???? ........ 2002 was the last time that Independents(4) were elected to Parliament