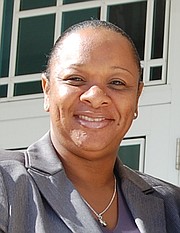 BAHAMIAN-born Sharlene Cartwright Robinson has become the first female premier of the Turks and Caicos Islands after leading the People’s Democratic Movement (PDM) party to victory in the general elections.

When the official results were announced on Friday morning, the PDM had won 10 of the 15 seats and the Progressive National Party (PNP) four seats. There is a recount in one constituency.

Former premier Michael Misick, who is before the courts on allegations of corruption, is set to be rejected as a candidate at large by the electorate, according to the preliminary results.

Mrs Cartwright Robinson led a team called “The Dream Team” to the election and had accused the Ewing-led government of having led the Turks and Caicos Islands into an abyss for which the citizens are suffering.

The 7,800 voters had three choices: the ruling PNP, the PDM and the People’s Democratic Alliance (PDA) led by Oswald Skippings.

That may be so, but the Turks are doing far better than we are economically with a lower cost of living and higher standard of living. They also score higher than us on the Human development index. If there is any country that's a plantation between the two countries... it's The Bahamas.

.. Turks & Caicos Vote For Change & End To Piracy. Have Bahamians Also Woken Up? ..

About time Bahamians ditch yellow and red tribalism and follow our Turks brothers out of democratic pirate dictatorship rule!

PLP & FNM pirates have all but completely destroyed our country, decimated our people and given whats left to foreigners. They have no business expecting Bahamians to vote for them again after four decades of broken promises, blatant piracy and friends, family & lovers governance.

2017 election should be a battle between DNA and Peoples Movement parties!

Well Sharlene Cartwright Robinson .......... the Bahamas has 170,000 voters who may be more interested in voting for you right now than our options......... Please do not invite Perry, HAM, Bran or LBT dem down to your swearing-in ceremony (they are radioactive right now)

Wow! Turks aloud a foreigner to be elected PM of their country. That could never happen where Mrs Sharlene Cartwright was born.

She is not foreigner. . .there are many British/Bahamians/Turks Islanders living here many of them sitting right in ya HOA. . .we are approximately half the population in Grand Bahama, NP and Abaco. . .with many in the outer islands! My people have a long and colorful history with the Bahamas! Many persons living in the TUCKS are TCI/Bahamians. . .born in the Bahamas! Our 1st PM was one (JA). . .and 2nd PM. . .had a name that is common in TCI. . .Ingraham. . .AND HE WAS FROM ONE OF THE ISLANDS WITH MANY TCI FOLKS!!

Good idea. . .but my brothers them over there would not want to "touch" the Bahamas with a ten foot pole!! But di agree with you. . .the joining of the two peoples would create an economic/HR power house in the region!!