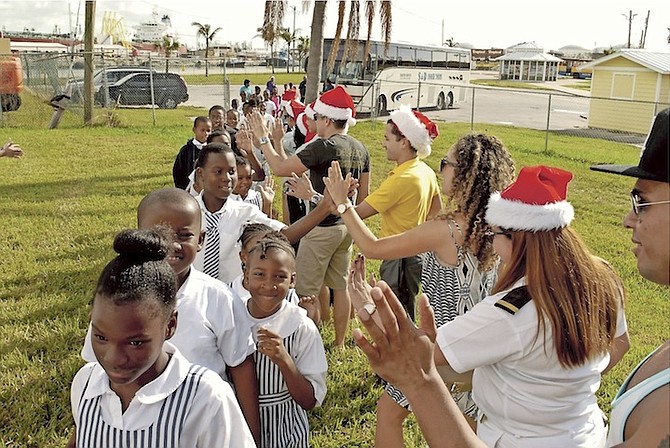 Some of the youngsters in Grand Bahama celebrating at the pre-Christmas party.

ABOUT 150 school students in Grand Bahama attended a pre-Christmas party and gift giving hosted by the Florida Caribbean Cruise Association at the Freeport Harbour.

The students were greeted by crew members of the Norwegian Sky, which has partnered with FCCA and the Ministry of Tourism.

This is the fourth time the event was held in Grand Bahama, complete with Santa Claus and his helpers, lots of food, fun, toys and gifts.

Each gift was courtesy of the members of the FCCA, which included hosts from the Norwegian Sky.

Jean Michel Dhelin, member of the FCCA, said every year they look forward to the event and believe that the tradition should always be continued.

Captain Nicholas Persson of the Norwegian Sky, said: “This time of year is all about giving back and making a better world through a great event for the kids.”

Nuvolari Chootosingh, manager of Maritime Tourism at the Ministry of Tourism, said to hold the event this year is particularly special.

“Hurricane Matthew which would have impacted so many of the kids, especially those from the western district of Grand Bahama. It was nice to see children come out and enjoy themselves,” he said.

Each child not only received a hot meal, but also shared a special moment with Santa Claus, his elves, and fellow classmates.

The FCCA is a not-for-profit trade organisation composed of 19 Member Lines operating over 100 vessels in Floridian, Caribbean and Latin American waters. Created in 1972, the FCCA’s mandate is to provide a forum for discussion on tourism development, ports, safety, security, and other cruise industry issues and to develop bilateral relationships with destinations’ private and public sectors.

By fostering an understanding of the cruise industry and its operating practices, the FCCA works with governments, ports and private sector representatives to maximise cruise passengers, crew and cruise line spending, as well as enhance the destination experience and increase the number of cruise passengers returning as stay-over visitors.