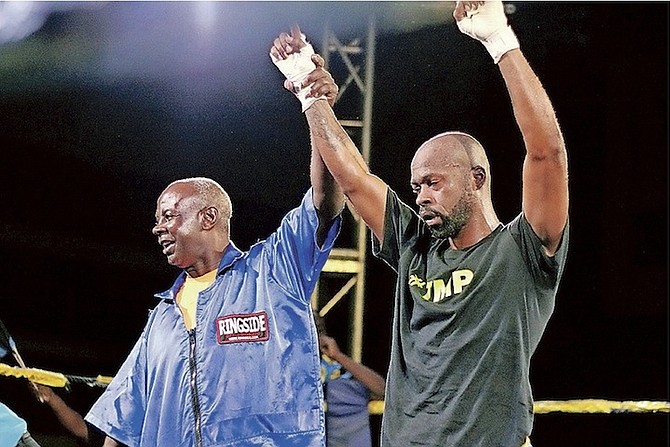 RAY MINUS JR holds up Meacher Major’s hand after he (Major Pain) won the main event to remain undefeated at home with a second round stoppage over Roberto Acevedo of Puerto Rico in the Caribbean Showdown boxing event at Kendal Isaacs Gym on Saturday night. Photo: Shawn Hanna/The Tribune

Caribbean Showdown II became a showcase for Bahamian talent in the ring as local fighters emerged with wins in three of the four bouts at the Kendal Isaacs Gymnasium.

In the main event of the card, Meacher “Major Pain” Major remained undefeated at home with a second round stoppage over Roberto Acevedo of Puerto Rico.

Acevedo swung after the first round Bell and connected with Major’s head as he turned to return to his corner, which prompted the hometown favourite to turn around and stare down the visitor.

In the second round, Major came out of the corner as the aggressor and delivered a combination which had Acevedo in trouble backed against the ropes.

Acevedo resorted to tie ups and retreating to the ropes, but showed little signs of offence in the round. After one such exchange, Acevedo refused to leave his corner, much to the dismay of his trainer, and the fight was called in favour of Major.

“The fight, it was a good fight, it didn’t end the way I wanted it to but I’m thankful for the win. I really wanted to knock him out. He was fighting kind of dirty in the first round and I started to get frustrated but I didn’t want to get away from my gameplan. I wanted to go in there and just annihilate him,” Major said.

“He was doing those tactics and that’s why I was getting frustrated. I never fought against a fighter that used those before so I had to keep my composure. Always thankful for the win but I am disappointed in the way it ended with him stopping.”

Even when Acevedo delivered his best shots, Major said he remained unphased and had his goal in mind of winning the fight and moving on to new opportunities, including chasing the British Commonwealth title.

“He caught me with a good shot but it wasn’t anything serious. It just woke me up a little bit to know that I was in for a fight. I was looking forward to this, I never took him lightly, I’m just grateful to god for the opportunity,” Now it’s back to the drawing board and getting ready to fight again next year and all the opportunities I have ahead of me in 2017.”

The highlight of the night came in the co main event matchup where the prefight prediction of Bahamian heavyweight Bernard Rolle proved to be true.

Rolle won via first round knockout over Decius Delan of Haiti.

“I told yall what I came to do, I came to do this thing. Whatever I come to do I live up to what I say and that’s to knock him out in the first round,” Rolle said, “This fight could have been even shorter. I was determined to put him away in the first couple seconds, but he was throwing some baby blows, it was only making me mad. I saw the opening and ‘boom’ I took it.”

Delan came out on the offensive early and Rolle seemed content absorbing shots and waiting for his opening. Rolle took several punches backed against the ropes and countered with a right hook that floored Delan and he was unable to continue following the standing eight count. It was a welcome return to the ring for Rolle who said he’s ready for his next challenge.

“I’ll be waiting patiently,” he said, “Whoever wants some can get some.”

In the most competitive bout of the evening, Lester Brown won by majority decision over Haiti’s Pierre Enabe.

“I had a skilled opponent. I was disappointed I couldn’t put him away but if I had just pushed a little bit harder than I did I know I could have gotten the knockout,” he said, “From here I’m just trying to get more fights in the US, to boost my record and face some tougher opponents.”

The Haitian fighters began the evening with a win as Remy Felisier won by unanimous decision over local talent, Ivan Moxey.

The bout between Leon Bain and David “Pacesetter” Wallace was ruled as a no contest.