A Young Man's View: A Pledge Of Service To My Hometown 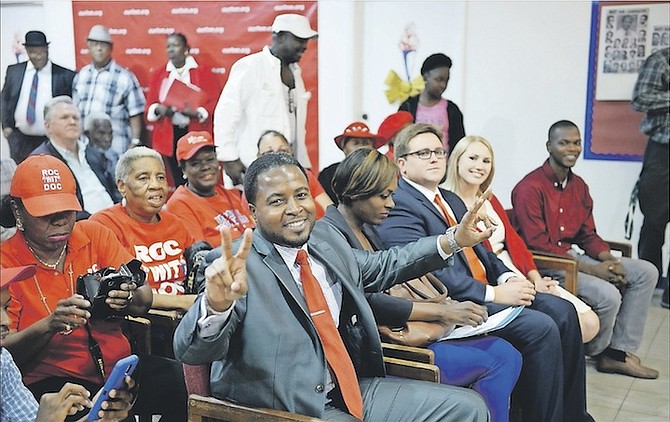 To use the words of founding father Sir Cecil Wallace-Whitfield, today “my soul is dancing!”

Firstly, I want to thank the Executive of the Free National Movement (FNM), the Council and FNM leader Dr Hubert Minnis, deputy leader Peter Turnquest, chairman Sidney Collie and secretary general Michael Foulkes for furnishing me the opportunity to stand for my wonderful hometown during the next general election. I maintain the view that Long Island is the best islands in The Bahamas.

It is with great gratitude and humility that I accept the nomination for the Long Island constituency. I cannot begin to express how honoured I am to have the privilege of serving as the FNM’s standard bearer in the constituency that I call home.

It is my hope that my nomination is a spark to ignite the fire under millennials to register to vote.

Our country has just suffered another economic downgrade. We are now in junk status, notwithstanding the fact that we pay Value Added Tax (VAT) and our leaders ought to have long adopted a fiscally prudent approach to our economic affairs. There is no fiscal responsibility. No accountability. That is most unacceptable.

To my Long Islanders … it has been a long time coming! It is Long Island’s time.

Long Island deserves representation that is exceptional, transparent and one that facilitates and guarantees equal opportunity for all!

To those struggling small business owners on Long Island, I hear you!

To those fishermen who lack proper ramps, properly dredged channels and docks and constantly lose their catch to poachers, I hear you. Fishermen are also in need of duty free concessions to upgrade their boats and purchase and import new engines.

To those farmers in Long Island, who have no market and need assistance, I hear you. Perhaps a substation of the Bahamas Agriculture and Marine Science Institute could be placed in Long Island. After all, Long Island is a fishing and farming community!

To those residents who are unemployed and underemployed, I hear you.

To those islanders who are too frustrated to return due to a lack of opportunity, I hear you.

As it stands, there is a need for a technical school for Long Island, even if that means instructors fly in to conduct six to eight week courses in boat building, carpentry, tiling, masonry, etc. We must establish classes that teach Long Islanders how to preserve fruits and market them to New Providence and elsewhere.

Disappointingly, Long Islanders who were issued vouchers in the wake of Hurricane Joaquin are unable to redeem them. The vouchers expire at the end of this month. Why is VAT being charged on the vouchers?

Why are trees and livestock and equipment not available when Long Islanders board a flight to Nassau and seek to use the voucher? How could the government possibly be so inconsiderate?

Why are tractor operators such as Frank Curry left in limbo and not paid when they completed thousands of dollars in remedial work following the storm?

We need special education teachers on Long Island. The Ministry of Education has done little to cater to special needs children. What’s more, we need to fully staff schools with teachers, particularly for BJC and BGCSE subjects. There are teacher shortages in Long Island and little is seemingly being done to address the matter.

Most importantly, we need a spanking new airport. I am keen to see that come to fruition. We have very little airlift into Long Island. The airports at both Stella Maris and Deadman’s Cay cannot accommodate large international flights.

Agitating for a new airport and terminal is a key plank of my campaign going forward.

Crown land is another issue of concern to Long Islanders. There are hundreds of acres of crown land in Long Island. Yet, islanders who have applied have no received responses. The Department of Lands and Surveys should move to settle and locate the crown land littered throughout the island.

The healthcare facilities in Long Island are in dire need of improvements. Why must it take so long to obtain the results of a blood test? Why does the north not have a full-time doctor? Why has the shortages in available medication not been addressed?

Is the X-ray machine functional? And, if so, is there anyone present to operate it?

We need three brand new ambulances in Long Island. The used ambulances served no purpose and now permanently off the road. What’s more, we do not have a fire truck.

For many years, Long Islanders have been promised running water from one end to the next. That is an attainable goal. The water in Long Island is brackish or salt, resulting in one’s fixtures quickly rusting and clogging. In a modern Bahamas, why are these basic amenities not available to all?

I expect that Cable Bahamas would extend its services further north of Deals and further south of Deadman’s Cay.

I look forward to sitting with Long Islanders and planning the way forward for our island. Our transformation is on the horizon.

I dedicate last night to my grandparents Edward and Lenora Gibson (of Long Island) and to the memory of my late uncle Aaron Gibson!

I would like to also take this opportunity to thank my loyal supporters who include but are not limited to, Elias Cartwright, Jason Cartwright, Bernard Adderley, Dyllis Smith, Ian Knowles, Kevin Burrows, Kenneth Cartwright and Maurice Minnis. To them I say “forward march!”

Long Island, I look forward to being your humble servant. I coming home.

Really? you are much to close to the outspoken QC who kneels on pavements to pray He should try his knees in church. Crazy like a fox I guess.

Donald d'Albenas is probably rolling over in his grave right now. An opposition fight in an opposition stronghold. Sounds like the new FNM !

BOL ......... you must be in the over 75 category to remember the white Canadian UBP fella best known for giving out rum, rice and flour for votes ....... We do not need to go back there ....... Adrian is of the post-Independence generation that must take LGI to the next level of development ........ right now we are 30 years behind the present