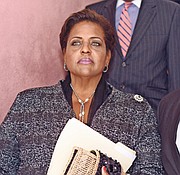 LONG ISLAND MP Loretta Butler-Turner said yesterday there is no need for her to appear before the Free National Movement’s “kangaroo court” because the party’s “trumped up” accusations against her “are bogus”.

In an interview with The Tribune at her home, Mrs Butler-Turner also refuted claims by FNM Chairman Sidney Collie that she did not respond to the party’s Executive Council concerning the charges against her and the six members of Parliament who ousted FNM Leader Dr Hubert Minnis as leader of the Official Opposition in the House of Assembly.

On Wednesday, the FNM appointed a three-person tribunal to decide the fate of the “rebel seven”. The party accused the group of MPs of bringing the party into “disrepute, division, rancour and dishonour” as well as signing, delivering and causing to be a read a letter to withdraw support for Dr Hubert Minnis. They had seven days to write the Executive Committee of the FNM to attempt to exculpate themselves.

Mr Collie told The Tribune that the MPs have yet to submit letters of response to the charges against him and therefore the FNM is proceeding with the disciplinary process.

However, in an email obtained by The Tribune dated December 15, Mrs Butler Turner acknowledged receipt of a letter from Michael Foulkes, the party’s secretary general, on December 8 and responded to the charges.

In the document attached to the email, the Long Island MP said the seven members are not “prepared to get into a fight with our party, which focuses once again on Dr Hubert Minnis as this is a futile exercise.”

“It is imperative, and our primary concern, that we consider what is in the best interest of all the people of the Commonwealth of the Bahamas. Indeed, the Bahamian people and our FNM supporters demand that we rid our country of an inept and corrupt PLP government.

“Contrary to the charge, we, duly elected parliamentarians, have exercised our constitutional right in the best interest of our fellow FNM supporters and all the people of the Bahamas,” the document read.

Mrs Butler-Turner said the party has no recourse against her or the other MPs and if they took their “charges” to a real court, they would not have a “leg to stand on.”

“The bottom line is if this is pursued in the courts of the Bahamas under the constitutional laws of the Bahamas, they would not have a leg to stand on. As a matter of fact, they will be chased out of the courts rapidly. That is why they are seeking to play to the imaginations and the ignorance of persons who do not understand, when they are convening nothing more than a kangaroo court,” Mrs Butler-Turner said yesterday.

“I don’t know who is advising the FNM in these bogus actions but it really frightens me to know this is the party that we have all been apart of and have pledged our allegiance to and to see this group of . . . people who do not adhere to even the party’s constitution, much less the constitution of our land, clearly they are so out of their own depth and are as delusional as the PLP.

“The party can do what it likes as far as we are concerned, we have done everything by the law and we will proceed forward without getting distracted by all of these jester type antics by this group of people who surely do not understand the law of the Constitution.”

Mrs Butler-Turner said she has lost all respect for the credibility of the leaders of the FNM and her next step is to focus on the Bahamian people, “who want more than anything to get rid of the Progressive Liberal Party.”

Her attitude towards the Bahamian people would be no different if, God forbid, we were ever stupid enough to support her political ambitions. The grossly inept and corrupt LBT, like the grossly dimwitted and financially greedy Minnis, is all about self above all else! Aside from a difference in sheer mass, there's never been too much to distinguish these two from each other.