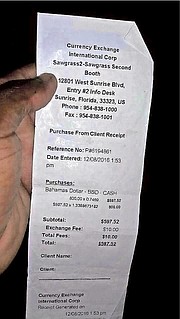 The receipt showing the currency exchange in Florida.

THE Ministry of Foreign Affairs yesterday sounded the alarm on “fake news” after a social media post claiming that the country’s currency had been devalued was circulated on several platforms.

In a statement yesterday, the ministry maintained that the value of Bahamian currency in The Bahamas remains on par with the US dollar when traded in The Bahamas, and strongly discouraged persons from sharing “fake news” on social media.

The ministry noted the Bahamian dollar was not a convertible currency, and as such, could not be freely converted outside of the country like the US dollar, the British pound, and the Euro. It also means that the Central Bank of The Bahamas does not have to honour the exchange of any Bahamian dollar or dollars spent or exchanged outside The Bahamas, the ministry added.

The rebuke follows the posting of a receipt that purported to show the exchange of Bahamian dollars at the Sawgrass Mall in Florida for US currency. The post sought to demonstrate that the Bahamian dollar was not being traded one-for-one with its American counterpart, and had been devalued.

“Such a conclusion would be false (and) is discouraged,” the ministry’s statement read.

“This is what is now being described as ‘fake news’ and Bahamians travelling overseas should be warned. Sharing of this ‘fake news’ on social media or on any other media platform is strongly discouraged.

“The public is advised that in Bahamian law, the Bahamian dollar is one-for-one to the US dollar when traded across the counter in Nassau and throughout The Bahamas, whether in a bank or in a store.

“This has been the position since the change from the Bahamian pound to the Bahamian dollar in 1966,” the statement continued.

Speaking directly to the social media post about exchanging currency at the Sawgrass Mills Mall in Fort Lauderdale, the ministry explained: “Further, a private trader such as the one purportedly accepting Bahamian dollars for exchange at the Sawgrass Mills in Florida does so at his or her own risk and can charge whatever they believe the market can bear.

“Whatever price the trader in the US charges is entirely a matter for that trader and his or her customer but does not impact or reflect the trading value or official one-for-one exchange rate of the Bahamian currency in The Bahamas.”