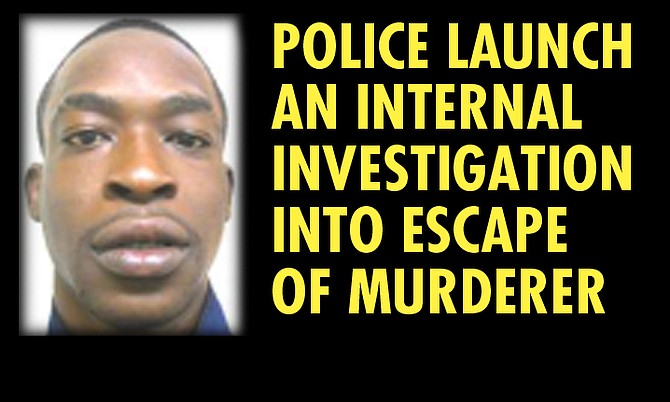 AS a massive manhunt continues for convicted murderer Ormand Leon, police have launched an internal investigation into how he escaped from a police bus.

According to police, 26-year-old Leon escaped from the police transport vehicle on York Street, off East Bay Street, while en route to the Bahamas Department of Correctional Services around noon on Tuesday.

Up to press time yesterday, police remained tight-lipped on how the prisoner managed to escape despite the fact that several armed officers were seated a few feet away from the convict.

Senior Assistant Commissioner of Police Leon Bethel told The Tribune an internal investigation in underway into the matter.

ACP Bethel said police are following significant leads and expect to have “this extremely dangerous man” in custody shortly.

“We are continuing our massive manhunt and using all the resources of the Royal Bahamas Police Force and following up on leads we received from members of the public,” ACP Bethel said.

“We are getting good communication from the public because no one wanted this man to be on the street. He is a convicted murderer and he should be in prison. We have several teams deployed and we will stay out until we find him.”

ACP Bethel also sent a warning to any members of the public who might be providing shelter for the convict.

“We are also seeking anyone who has been aiding this man, sheltering him, giving him food and hiding him from the police,” ACP Bethel said.

“We will charge you for helping this felon and haul you before the courts.”

Leon is described as a brown-skinned male, of slim build, who is said to be about 5ft 9in to 5ft 11in. Police said he frequents Moore Avenue, Homestead Street and Miami Street. He was last seen wearing a white T-shirt and blue jeans.

Police urged members of the public not to approach him, but instead to call 919 or Crime Stoppers at 328-TIPS (8477) if he is seen.

Shortly before the escape, Leon was told by Justice Bernard Turner that he would learn on February 16 what sentence would be imposed on him for the July 10, 2011 murder of Fransisco Hanna.

Leon is facing up to 60 years imprisonment for the Wilson Tract shooting.

Hanna was shot twice in the chest and three times in his right arm. He died of his injuries at the scene.

At trial, the prosecution produced a video confession of Leon telling police how he and his alleged accomplice had followed Hanna on the night in question, switched cars after almost being found out and then fled the area after the shooting.

Leon contended that the video confession was the result of inducement for his release from custody at the time. However, he exercised his right to remain silent when called on to give a defence.

Dennis Mather, 24, Leon’s alleged accomplice, was acquitted days prior to the verdict following the direction of Justice Turner to the jury that stemmed from legal submissions held in the panel’s absence on the close of the Crown’s case against the pair.

Both Leon and Mather had maintained their innocence in Hanna’s death and were respectively represented by Terrel Butler and Damian Whyte.

Makes you wonder if in fact he wasn't release by an officer or maybe paid to be kill and his body dispose by an officer. I don't put anything pass these police officers nowadays especially with the amounts of crimes they are committing.....

The Comrade prisoner must not have liked the direction the bus was heading in?

How does one get off that Prison Rocket Ship as it Almost flies down the road thru traffic. Also are not these criminals shackled and monitored? Are the doors and windows that easy to open and exit? Lots of questions. Finally why not make the prisoners wear bright PINK or ORANGE UNIFORMS. White T-Shirt and Jeans COME ON!!

Tal, look like you and ya cousin on same page with this one. You Conians is sumptin else.

Listen guys, if you have a shrewd convict that has secretly taken it unto himself the opportunity to plan this in an El Chapo inspired prison break, haas all his associates ready to execute a planned-by-the-minute-blue-print, even a handful of armed, attentive police officers have absolutely no chance to foil the execution of such plan. NOT.

“We will charge you for helping this felon and haul you before the courts.”....

Dear ACP Bethel how about you start with your Superman officers personal detail of the escapee? Either they let him go, failed to stop him or where just simply outrun (none of which is an excuse really).

srt8 up. are the police who let him go getting charges?!?!

WTF was the police bus doing on York Street? I woulda thunked that to get to Fox Hell, you'd continue down East Bay Street...

York Street is where Ormand wanted to get off. Either bribery, blackmail or hefty cash payment was involved in this one.

yup - no business at all being on York Street. But then again, it was lunch time....