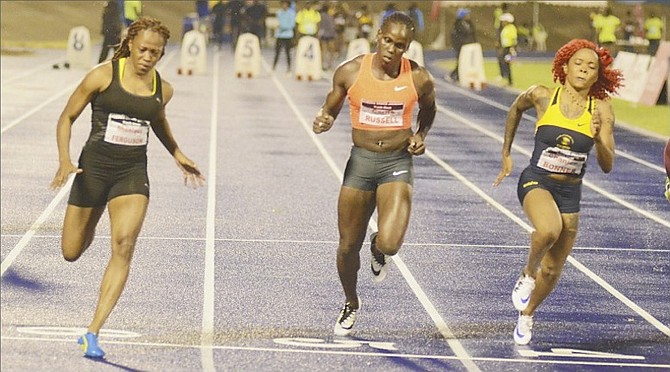 SHENIQUA FERGUSON competes in the 60-metre dash at the Queen’s/Grace Jackson Track Meet at the National Stadium in Kingston, Jamaica, on Saturday.

A change in training venue from the United States to the Caribbean is certainly starting to pay off big dividends for sprinter Sheniqua ‘Q’ Ferguson.

At the Queen’s/Grace Jackson Track Meet at the National Stadium in Kingston, Jamaica, over the weekend, Ferguson competed in her second 60 metres since she made the transition to Kingston to train under the Maximising Velocity and Power (MVP) Track and Field Club in Jamaica, which is headed by coach Stephen Francis.

Ferguson, 26, was fourth in 7.25 in the race on Saturday that was won by her team-mate Elaine Thompson in 7.17. Ferguson’s time pushed her under the qualifying time of 7.32 for the IAAF World Indoor Championships, scheduled for March 17-20 at Track City USA in Portland, Oregon.

While Ferguson, who ran a personal best of 7.22 in 2010, was not available for comments, coach Paul Francis said she has adapted very well to her new environment. åShe previously trained with Henry Rolle at the Auburn University in Auburn, Alabama.

“Sheniqua came here with the idea of trying to improve on her performances and so far she has been doing quite well,” Francis said. “She has an excellent training attitude, very disciplined and personable, getting along with everyone in the group and her training at this point is very, very encouraging.

“She ran her first competitions over the last two weeks over the 60 metres and her last performance, she was close to her personal best in the 60m, so that’s a good indicator so far, based on where she is at in her training. I have no complaints, as a coach, with how she has applied herself with the regime here. So I expect that she will satisfy herself, her family and her country while she is here.”

Ferguson is expected to be back in action in her next individual meet on February 27.

Also at the Grace Jackson Track Meet, Janeko Cartwright, competing for the University of the West Indies Mona, was 13th overall in the open men’s 200m. He ran 21.73. The event was won by Brandon Tomlinson of GC Foster College in 20.91.