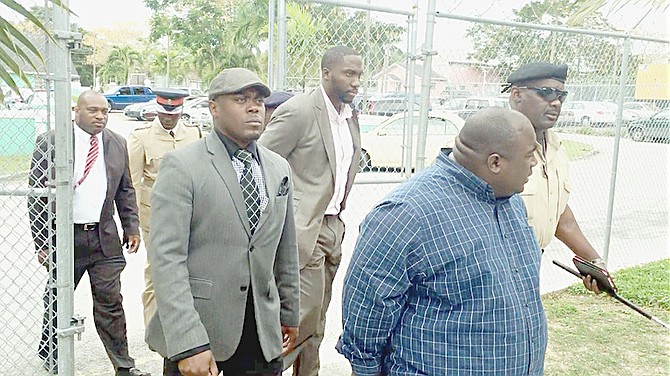 TWO policemen were granted $18,000 bail on Tuesday following their arraignment in connection with the beating death of Aaron Rolle exactly three years after the 20-year-old was found dead in a police station cell.

Constables 2126 Akiel Smith and 2648 Carl Smith were flanked by colleagues as they entered the Nassau and South Streets Magistrates Court Complex where they appeared before Chief Magistrate Joyann Ferguson-Pratt facing a charge of manslaughter.

It is alleged that the pair, on February 9, 2013, used unlawful harm to cause the death of Rolle.

The accused men will not be allowed to enter a plea to the allegation until they are formally arraigned in the Supreme Court where they are expected to be tried.

The presentation of a voluntary bill of indictment (VBI), scheduled for March 23, will facilitate the transfer of the matter to the Supreme Court.

The police officers were charged with manslaughter under Section 293 of the Penal Code.

When the chief magistrate told the accused that they would have to be remanded to the Department of Correctional Services, their lawyer, Wayne Munroe, QC, said that manslaughter was a bailable offence under the amended Bail Act.

After an inspection of said law, police prosecutor ASP Clifford Daxon was asked if he had any objection to the officers receiving a bond pending trial.

The prosecutor did not object.

Mr Munroe advised the court that the matter was three years old.

“This matter was subject of a coroner’s inquest and appeal and my clients are still here,” the lawyer stressed.

“They are serving police officers?” the chief magistrate asked.

They were ordered to return to Magistrate’s Court on March 23 for the VBI presentation.

If convicted, the officers could face between 18-35 years imprisonment as prescribed by the Court of Appeal in the case of Larry Raymond Jones. However, a judge does have the discretion to impose a lesser sentence when factoring mitigating and aggravating circumstance of the case.

The circumstances surrounding Rolle’s death were initially heard in Coroner’s Court where an inquest was held.

Upon conclusion of the inquest into Rolle’s death, Acting Coroner Jeanine Weech-Gomez recommended the file be reviewed by the Office of the Attorney General to determine whether action should be taken against the officers. She also suggested that it be forwarded to Commissioner of Police Ellison Greenslade to conduct disciplinary proceedings against the men.

However, in July 2014, family of the policemen appealed the acting coroner’s decision and the matter remained in limbo for some time.

In August 2015, the judge presiding over the officers’ appeal found that there was a fundamental misdirection to the Coroner’s Court jury during the inquest.

The judge ruled an “unlawful” killing was not a verdict in law available to the panel at the time of the proceedings.

However, Senior Justice Stephen Isaacs also maintained at the time “in my judgment, the blunt force trauma to the torso of the deceased was the immediate cause of death.”