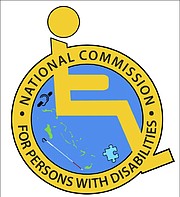 TO get a younger demographic thinking and talking about disabilities and related issues, the National Commission for Persons with Disabilities launched a logo design competition in all secondary and high schools last October.

“The commission wanted to have a logo that would come from the wider community, represent the creativity and talents of youth of all abilities, and reflect the values of inclusion, empowerment, and accessibility,” said DeCosta Bethel, the commission’s chairman.

Only a handful of schools submitted designs from their students and this was understandable as The Bahamas was dealing with the devastating effects of Hurricane Joaquin. The entries were judged by a panel from the community of persons with disabilities.

Commission Vice-Chairman Derrick Nottage, who resides in Grand Bahama and is a wheelchair user, presented the winners with their prizes at a ceremony at the Eight Mile Rock High School.

In congratulating the winners, Mr Nottage said: “Some of our young men are making headlines for the wrong reasons, but today we proudly celebrate three talented young men who have channelled their creativity and energy in the right direction. I applaud them for their efforts in transforming the words of the Commission’s motto into a logo.”

The winning design incorporated symbols of four major categories of disabilities, namely mobility - represented in the logo by the universal wheelchair concept; developmental and learning disabilities - represented by a puzzle piece; deaf and hearing loss - represented by the image of an ear; blindness and visual impairment - represented by the white cane. The logo places the symbols and the islands of The Bahamas in the same space of an inner circle, symbolising inclusion and unity. And as a way of illustrating the breaking barriers, independence and empowerment of persons of all abilities, sections of the image of the wheelchair user are placed outside of the boundary of the outer circle.

“We have begun to address accessibility issues, we are dialoguing with stakeholders on matters such as housing and employment for persons with disabilities, and our public education and awareness efforts are ongoing,” Mr Bethel said. “We want everyone to become fully informed about the Persons with Disabilities Act and that it is everyone’s duty to respect, protect and promote the rights and dignity of persons with disabilities.”

Lester Ferguson, the commission’s executive secretary, noted that the group has a full agenda for 2016.

“The commission is tackling accessibility issues head-on: our buildings must become accessible; the abuse of accessible parking is a nightmare and must stop; accessible public transportation is non-existent, and we want to work with stakeholders to change that,” said Mr Ferguson.

To learn more about the law and the commission visit www.disabilitiescommissionbahamas.org.

"Disabled Basketball Player is Given Help by Opposing Player to Score a Shot."