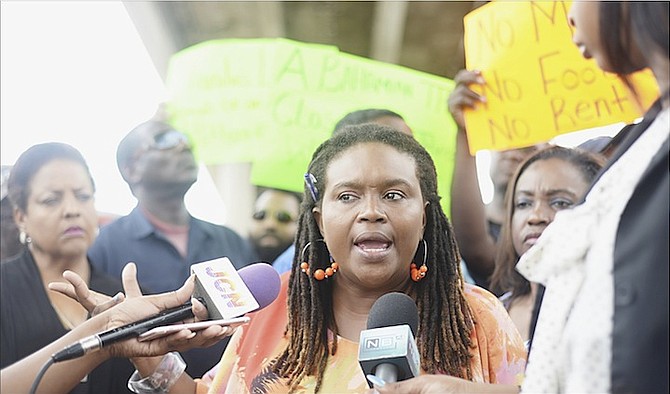 MEMBERS of the Potter’s Cay Fish, Fruit and Vegetable Vendors Association yesterday staged an angry protest, hoping to thwart attempts by the Ministry of Agriculture and Marine Resource to move a number of stalls from the site as a part of the multi-million dollar Potter’s Cay Dock redevelopment project.

Nearly 30 vendors demonstrated in the area yesterday, waving placards and voicing their displeasure with the way the ministry has handled the matter.

In a statement sent to The Tribune, members said they were being forced to evacuate the site where many of them have worked for decades.

The group stated that ministry officials are uprooting scores of vendors without presenting compensatory arrangements; an issue that the association said would push some 71 vendors into unemployment.

“Potter’s Cay is a generational venue (that is) comprised of marine vendors, produce vendors, mobile stands and crabbers. (Vendors) who without ceasing, night and day, rain or shine, have been the backbones of this micro-business environment,” the statement read.

“We the members of the Potter’s Cay Fish, Fruit and Vegetables Vendors Association are calling on you, the elected representatives, many of you to whose constituencies our vendors belong.”

The association said two vendors were notified on February 6 at 3pm that they had to attend a mandatory meeting at 4pm.

It was reportedly at that meeting that the two vendors were told they would have to vacate the area by February 13 - last Friday, which was one week’s notice.

“How would these persons now pay NIB, NHI, VAT, BEC, Water and Sewerage, school fees, mortgage and rent to name a few? Our vendors have prided themselves (on) being independent, civil, business minded and responsible citizens of our country,” the statement added.

“It has brought despair, hopelessness and disappointment to our vendors and their families who depend daily on the income provided from these stalls.”

Last November, the government announced a three-phased redevelopment plan for Potter’s Cay Dock, a joint effort between the Ministries of Works; Agriculture and Marine Resources and Transport and Aviation.

Phases one and two are now underway. The phases are being carried out simultaneously and are expected to be completed in May.

The first two phases call for the removal and relocation of trees on the southern foreshore to create a parking area, which would extend eastward to Williams Street, the extension of the Fish and Farm store by 150 feet to accommodate mail boat services and a new bathroom area with a security presence.

Additionally, phase two is expected to see the development of security checkpoints at the entrance and exit of the entire facility and kerbs erected around the perimeter of the dock as a safety measure to prevent potential accidents.

That month, a source within the Port Department expressed concern with the lack of action on the part of the Department of Agriculture, admitting that there is some frustration with the lack of clear directives on what it intends to do with the stalls and vendors at Potter’s Cay.

Additionally, vendors also expressed concern over what would happen to them amidst redevelopment efforts.

One long-time vendor said while the efforts of the Port Department are commendable, there remains uncertainty over how this would affect vendors.

To date the Department of Agriculture has not made public its plans for Potter’s Cay Dock.

There have been calls in recent months for more than 25 stalls that operate on a day-to-day basis at the site to be updated to mirror other development efforts currently underway at the East Bay Street social hub.

Attempts to contact Minister of Agriculture V Alfred Gray were unsuccessful, but employees in his office indicated that he would not comment on the matter until he had “looked at all the elements connected with the project”.

V. Alfred Gray wouldn't be on time for a meeting with his own a$$hole if he was summoned at 3 pm and the meeting was at 4 pm. These 'lords' in the PLP are a disgrace to the people of the Bahamas. Get rid of the geriatric bums in our Parliament Bahamas!

They don't care and will still vote PLP again in the 2017 election!

PLP should have promised more joblessness... that seems to be one thing that they CAN deliver

Well everyone must agree that some of the stalls are unattractive and dirty. People need to accept the fact that not because something is traditional that it means it is practical in today's society. Back in the 60's, 70's and 80's Potter's Cay might have been a quaint little market with native fruits and friendly vendors. Today it is a dirty ghetto with rowdy crowds, loud music and generators and the smell of rank you know what. But whatever, I think that provisions should be made to relocate vendors in a more suitable environment. But then again, this stupid government hate thinking out of the box. You know what though. Most of the rowdy vendors under the bridge are pro PLP, so they deserve what they are getting.

You know what struck me as I watched the news, that place is AWFUL. Dirty, gross, smells like a sewer, rat infested, falling apart, but they are fighting tooth and nail to keep it as it is. It says something about how far we have fallen under the watchful eyes of forty years of governance. They arent fighting to get out, they're fighting to stay in comfortable squalor. Mental slavery.

These the same damn people who are die-hard PLPs!! Pindling and PLP spoiled all of them over the years with their entitlement attitude because they are Bahamians. That area is stink and disgusting and the vendors don't give a shit about how it looks!

This is a result of incompetence. Where is the plan?

All of this could have been avoided if the Ministry responsible had a plan.

The Ministers involved must have known that jobs were at stake.

Although obvious, finally, someone posting a comment that makes sense!

Honestly, I have no sympathy for the vendors. They work on Potters Cay day in and day out and have done nothing to improve the area. They actually contribute to the disgusting state the cay is in. Potters cay is a gold mine yet NONE of the stakeholders lift a finger to clean it, remove the filth, or even care about the stench of the place. They should be fined for the amount of garbage they throw in the harbour. Potters Cay is a primer example of Bahamians just not giving a shit about what directly affects them day to day and is an embarassment to the country.

While i do agree there was a lack of planning, Potters Cay dock could use the revitalization of the area. The area for the most part is unkept and running wild with rats, and most of the same vendors dont really contribute to keeping the surrounding area tidy. So it would be a welcome to see the area cleaned and tidied up a bit, but at the same time the vendors jobs and stalls should be secured.

These same vendors will have the area nasty in a jiffy. Just look at any area there are vendors and you will find FILTH. Bahamians have no pride and will sit in that filth until someone else comes to clean the area for them. Never mind the vendors lifeblood is garnered from these areas. The government needs to hold the vendors accountable for their areas. If they are nasty, have rats, stink, and in general look like a dump, send them on their way and let some Bahamian with pride and dignity take over the area.