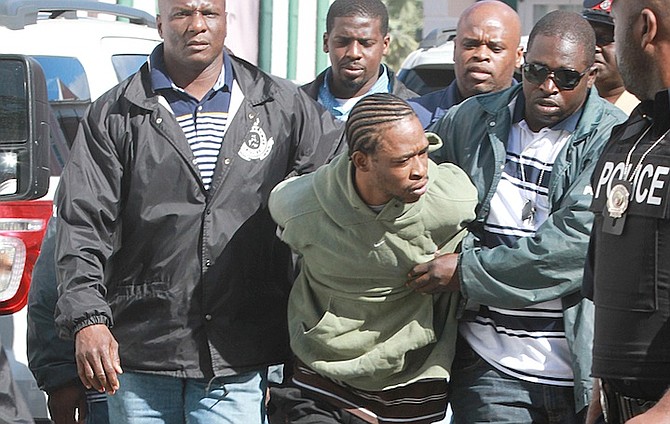 MURDER convict Ormand Leon, who escaped from a police bus two weeks ago, was yesterday sentenced to more than 40 years in prison after a Supreme Court judge found that he was apparently “unwilling” to remain in police custody for the court’s sentencing.

His exact sentence is 41 years, six months, two weeks and one day.

Justice Bernard Turner, in delivering Leon’s sentencing for the July 10, 2011 murder of Francisco Hanna, said the two weeks and one day of his sentence represents the amount of time he spent on the run after his escape from police custody on February 2, as well as the one day after his sentencing was originally scheduled to take place on February 16.

The sentencing came almost 12 hours after police announced that they had captured Leon in southwest New Providence, marking the end of a massive two week-long police manhunt for the “most wanted convicted murderer.”

Yesterday morning, Leon was escorted into Justice Turner’s chambers by more than a dozen police officers, including Chief Superintendent Paul Rolle, officer in charge of the Central Detective Unit (CDU), to ensure that there would not be a repeat of the February 2 escape. The officers also stayed for the duration of yesterday’s proceedings.

In court, Leon’s attorney, Terrell Butler, submitted to Justice Turner that her client’s escape from police custody should not bear any weight on the original sentencing. Ms Butler also submitted that Justice Turner should not “entertain” the negative reports surrounding Leon’s escape, such as him being labelled “armed and dangerous” by police, and that such reports should not factor into his sentencing.

Finally, she submitted that Leon was in need of medical attention, claiming that the 26-year-old had sustained an injury to his foot and was allegedly beaten about the body by police.

In delivering Leon’s sentence, however, Justice Turner said he did take into consideration the “mitigating circumstances” that had emerged during the trial, such as Leon having a clean record prior to the incident in question, him being “gainfully employed” as a tyre repairman, and him being the father of two children from separate relationships.

However, Justice Turner said an “appropriately lengthy sentence” was necessary to express the community’s “abhorrence” to the crime for which he was convicted and that such an unlawful action not be allowed to occur in society any further.

Justice Turner also noted that the manner in which Hanna was executed in 2011, which he likened to an “assassination”, suggested strongly that Leon remained an ongoing danger to society.

Justice Turner also noted that Leon’s absence from police custody would have caused some manner of anxiety throughout the general society.

Justice Turner subsequently sentenced Leon to 45 years in prison; however, after taking into account the length of time he spent in police custody – three years and six months – he reduced it to 41 years and six months with effect from November 11, 2015, the date of Leon’s conviction.

During trial, the Crown alleged that Leon was the driver of a car that followed Hanna on July 10, 2011, to Wilson Tract.

Hanna was shot twice in the chest and three times in the right arm. He died of his injuries at the scene.

The jury watched a video confession of Leon telling police how he and his alleged accomplice had followed Hanna on the night in question, switched cars after almost being found out and then fled the area after the shooting.

Leon contended that the video confession was the result of inducement for his release from custody at the time. However, he exercised his right to remain silent when called on to give a defence.

Dennis Mather, 24, Leon’s alleged accomplice, was acquitted days before the verdict following the direction of Justice Turner to the jury that stemmed from legal submissions held in the panel’s absence on the close of the Crown’s case against the pair.

Both Leon and Mather had maintained their innocence in Hanna’s death.