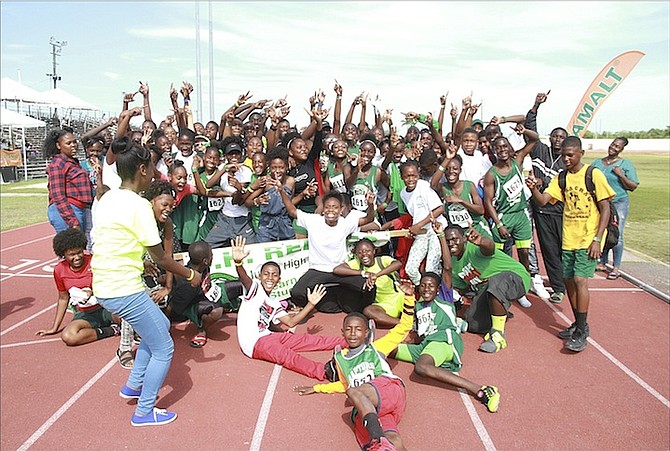 The Raptors delivered what has become a routine dominant performance to win the 23rd annual GSSSA Junior High School Track and Field Championships yesterday at the original Thomas A Robinson Stadium.

They amassed 546 points, 176 points more than the second place finishers AF Adderley Tigers, who scored 370. The HO Nash Lions were third with 250 points and the DW Davis Royals finished fourth with 217.

The most compelling race was the one for fifth position where the contenders were separated by half a point. The TA Thompson Scorpions narrowly claimed the spot with 198.5 points while the SC McPherson Sharks were sixth with 198. The LW Young Pitbulls finished seventh with 187.5 points while the Anatol Rodgers Timberwolves rounded out the field with 170.5 points.

Since the perennial powerhouse surprisingly surrendered the title to LW Young in 2008, the Raptors have returned to form in recent years.

The Raptors had several standout performances on day two, led by Craisha Johnson in the Girls U-16. She repeated last year’s success by again winning the 200m in26.41secs followed by Royals teammates Anishka Lotmore in 27.54and Precious Rolle in 28.64.

Perhaps the most impressive performance of the day came from TA Thompson’s Laroda Symilian in the Boys U-14 shot put.

He took first place with a throw of 11.78m, well ahead of the remainder of the field and second place finisher Aaron Ash, of Anatol Rodgers, at 8.96m.

His performance would have placed him second in the U-16 division, won by Joshua Anderson, of AF Adderley, who threw 12.18m.

Symilian also placed third in the high jump at 1.36m.

The Raptors swept all four 4 x 400m relay events to close out the meet.

The Girls U-16 team of Johnson, McKenzie, Ethiopia Turnquest and Tanae Roberts ran 4:31.08 while the U-16 boys team of Kendrick Kemp, Raheem Roker, Cordero Thurston and James Augustine ran 3:50.84.

Following their title win in 2015 Raptors coach Lenora Conyers gave insight to the success behind the programme.

“It feels great to win again. I must say the kids worked very hard. From the point we started with practice the kids were dedicated and we worked hard every time, even through mid-term break, we were putting in work. CH Reeves training is the real thing so we know that when we come to this meet we will not come half-stepping,” she said, “We have great dedication in our programme. Once you set the bar for the kids and you tell them what you expect, they will rise to meet it. The kids love to win and for us to come out, steer them in the right direction and encourage them, it makes it an easier transition for them to come on the track and do what they have to do. It’s great for the school. As coaches, we show them how to do things but once they come out, we just ask for them to perform at the best of their ability

The senior version of the GSSSA meet is scheduled to begin today and continue Friday at the original Thomas A Robinson stadium. The defending champion CV Bethel will be without coach Rupert Gardiner as they try to hold on to their title they won from CR Walker in 2014. Gardiner is now employed at the Ministry of Youth, Sports and Culture.