Pm: Postpone Convention Until After Referendum 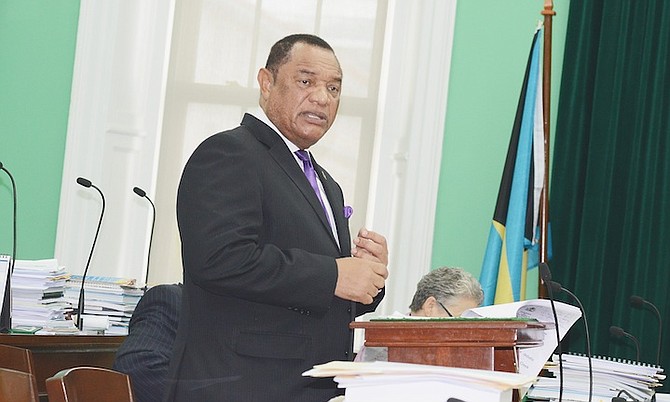 PRIME Minister Perry Christie has recommended that the Progressive Liberal Party postpone its national convention until after the gender equality referendum, according to party Chairman Bradley Roberts.

Arrangements are now being made, Mr Roberts said, to hold the event in November 2016 at the Meliá Nassau Beach Hotel or the Baha Mar convention centre.

Initially, the convention was planned for November 2015 but was rescheduled for April 2016 because of the devastation left by Hurricane Joaquin in the Family Islands and recovery efforts, which were underway. Hurricane Joaquin battered the central and southern Bahamas for two days, on October 1 and 2, 2015.

The announcement from Mr Roberts came days after Mr Christie was noncommittal about the constitutional referendum, providing reporters with no specifics on when a vote on key legislation concerning the matter will be taken in Parliament.

However, National Security Minister Dr Bernard Nottage, who has referenda and elections in his portfolio, told reporters earlier this month that it was likely the referendum would take place “before the middle of this year”.

Still with no definite date set for the important vote, Mr Roberts said it was the prime minister’s suggestion to delay the convention until after the referendum.

“Councillors as you are aware the party’s National General Convention was rescheduled for April 2016,” Mr Roberts said during a general council meeting last Thursday.

“The minister of national security announced that debate of four Gender Equality Referendum Bills to give women equal right as males will be debated shortly in Parliament.

The PLP has not held a convention since 2009, even though the party’s constitution mandates that one be held every year.

Last year, Mr Roberts said it was important to postpone the convention so that the party and government could focus on bringing some level of normalcy and comfort to the lives of the residents of the southern Bahamas. He said assisting them with rebuilding their lives and communities after the hurricane was of paramount importance to the government.

“Politics must necessarily and wisely take a secondary role to this critical national undertaking,” the chairman said at the time in a press release.

“The party’s leadership has determined that the level of devastation caused by Hurricane Joaquin and the scope of the recovery, the rebuilding and restoration efforts – especially of the physical infrastructure – necessarily require the full attention and focus of the government at this time.

“Bringing a measure of normalcy and comfort to the lives of the residents of the southern Bahamas and assisting them with rebuilding their lives and their communities are of paramount importance to the government at this time.”

Earlier this month, Dr Nottage told The Tribune that the government was still committed to ensuring the referendum took place.

“It’s very much still on the books,” he said at the time. “Might I add it will be talked about in Parliament this month and Parliament will have to make a decision on when to debate the bills. The referendum is likely to be carried out before the middle of this year.”

Asked whether the opposition was now on board with each of the four equality bills, which have been in the committee phase of the House of Assembly for some time, Dr Nottage said it was his understanding that each member would do whatever they think is right.

“As I understand it, the opposition is not going to take a position on it. They are going to leave it up to their members to do what members feel is right for them. We expect to get some support from the opposition and we expect our government members to support the bills.

“The bills have been in the committee phase in the House for a very long time and I expect that there may be some changes in people’s positions (but) we won’t know until we go back to Parliament with that on the agenda,” Dr Nottage said.

And there will be no referendum...

THIS IS A BRILLIANT MOVE BY BRADLEY ROBERTS & THE PLP:

Among do's and dont's of political parties is the strategy not to hold a convention until after the other political party hold their own first. In this case, the FNM Central Council has already committed to setting down a date for a convention by the end of February. Most FNM Party supporters wants to have a convention ASAP, as early as April to address the ineptitude in its leadership.

It is hoped that, during this convention, a full election of officers will take place. The issue as to choosing a suitable leader to lead the Party into the next general election will be decided. The PLP, under the chairmanship Mr. Bradley Roberts, by pushing back their convention so far down into the calendar year, is effectively intuiting for the FNM to keep its present Party Leader, Dr. Hubert Minnis. This, it is felt, is tantamount to the FNM not contesting the next general election. The PLP would win easily.

Should the FNM be tempted not to have a convention ASAP, as in April, and it follows this strategic guideline for political conventions, the only next practical date to hold a convention would be in January of 2017. This leaves 6 - 8 months max. for any leader in the Party to ready the FNM's political machinery for a general election. Would this then be too late to choose an alternative leader? The PLP thinks so!

This is a brilliant political move that can only be made by a master such as Mr. Bradley Roberts. Not necessarily his politics, but now you'll see why I love this man? You don't need a 'pace-maker' for your heart if you are on the opposing side from Chairman Roberts.

In this case, the FNM Central Council has already committed to setting down a date for a convention by the end of February

Ha! Watch. Christie is playing this band of blind children like the lottery, and he currently has the winning ticket.

Prime Minister Bradley Roberts and PLP Chairman Perry Christie you all keep up the good work.

If you call the fool they are doing "good work" your standards are very low.

The real headline is : PM: Postphone Convention Until After`Referendum And (hopefully) Bah Mar And Convention Facilities Will Open By Then (for us to have we convention and show off there).

John, on this account, if I hold my breath would you'll promise to come to my funeral?

The FNM needs to get the U.S. Cable News networks involved in investigating Perry Christie's corrupt affairs involving himself, his past law firm, his Chinese friends at Baha Mar, Dirty Sticky Fingers Davis, Baltron Bethel and Maynard-Gibson. Funny though how Peter Turnquest, Loretta Butler-Turner and Obie Wilchcombe all seem to be crying for the corruption involving the Bahamas Prime Minister (Perry Christie), Deputy-Prime Minister (dirty sticky fingers Davis) and Donald Trump's good friend Phil Ruffin to be investigated by the Public Accounts Committee but have done no such similar crying when it comes to the mega-millions of dollars of outright fraud that has occurred at the Bank of The Bahamas ("BoB"). We can only wonder why! Lkalikl would be better off publicizing to the U.S. media through a number of well placed tweets Phil Ruffin's ties to Donald Trump and the very corrupt Christie-led PLP government! Lest we forget, when Donald Trump cancelled his participation in the Fox News Republican National Committee Debate immediately before the Iowa Caucuses, Trump held a nationally (U.S.) televised fund raising event in Iowa for U.S. Veterans at which he proudly paraded Phil Ruffin on stage with him, touting all about his friendship with Ruffin and just how much of a great man and great American Phil Ruffin is. What a joke! Lkalikl needs to vent pent up frustration by taking all of this to the U.S. political pundits and watch how quickly it goes viral. Just might do so myself!

By repeatedly linking the issue of a PLP convention to developments concerning the country at large, Bradley Roberts and Perry Christie have demonstrated that they no longer understand that party and country are two separate entities. Yes, we have taken another crucial step on our journey from democracy to tyranny.

yup. the two don't even affect each other, it's like saying you have to post pone doing your homework because your neighbours gate is unlatched, and until it's latched you see no viable way of doing your homework on schedule. But according to the PLP that's life! Full of Delays!