‘Govt Is Ignoring Feedback On Nhi’ 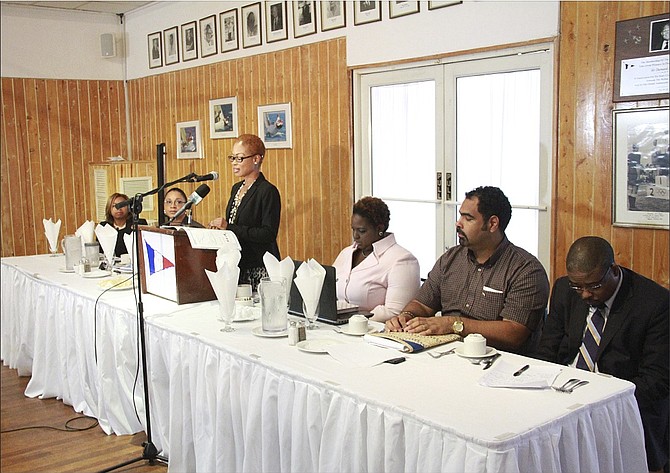 FORMER Senator Dr Duane Sands yesterday blasted the government’s proposed National Health Insurance scheme as an “abomination,” calling it a “shameful disgrace” that the Christie administration is sticking to its model while “dismissing” the input of key stakeholders.

Dr Sands, a cardiothoracic surgeon, criticised the government for seemingly taking the position that “they are the only ones who understand the issues” relating to NHI’s administration.

He expressed doubt that NHI as is will mature into a “workable programme” within the next three to six months.

Dr Sands’ comments were in reference to an ongoing dispute between the government and health stakeholders regarding the administration of NHI. Each of the major stakeholders, including the Bahamas Insurance Association (BIA) and the Medical Association of The Bahamas (MAB), has expressed reservations over the government’s NHI model.

NHI stakeholders have also criticised the government for its poor consultation with the various groups over key components of NHI, with multiple stakeholders expressing the feeling of being “ignored” by the government in the debate over NHI’s administration.

“The challenge with the so-called debate on NHI is that there has been no debate,” Dr Sands said. “And so all of the important stakeholders have been vilified, they’ve been ostracised, they’ve been shut up, they’ve been marginalised. I happen to be one of them.

“Unfortunately, the government of The Bahamas has decided that they are the only ones who understand the issues. That they are collectively the owners of all of the intellectual property as it relates to the advancement of healthcare, and that is most unfortunate.”

He added: “And so even though I support National Health Insurance, I believe that what has been presented can only be considered an abomination. It is a shameful disgrace that we have arrived at this point by dismissing the insurance industry, by dismissing the physicians, by dismissing many of the stakeholders. And we can do better than this.”

Dr Sands also criticised the government for cultivating an “elevation of expectations” for NHI’s services and functions amongst Bahamians, most of which he said are unlikely unattainable in the short-term.

“When you say to people that there will be no more cookouts, that we will take care of every single medical problem that you have, there will be no limit to the benefits. That cannot happen in any country in any economy anywhere in the world, and yet that has been the mantra of this NHI rollout,” he said.

“I am hoping that we get a reasonable NHI programme; I don’t believe it’s going to happen within the next three to six months, at least nothing that is a workable programme. I remain committed to participate as a patriotic Bahamian who is duty bound to give my honest opinion to my government. I have loyalty to no other country but this.

“But I am not going to pretend that what I see is workable. The emperor is wearing no clothes. And I hope that now that the shots have been fired over the bows, that we can all step back, shake hands, sit down together and come up with a workable solution.”

NHI’s primary care phase is expected to be introduced in April. However, Minister of Health Dr Perry Gomez has said this phase would “likely” be delayed.