Tears From Accused As Pair Found Guilty Of Manslaughter 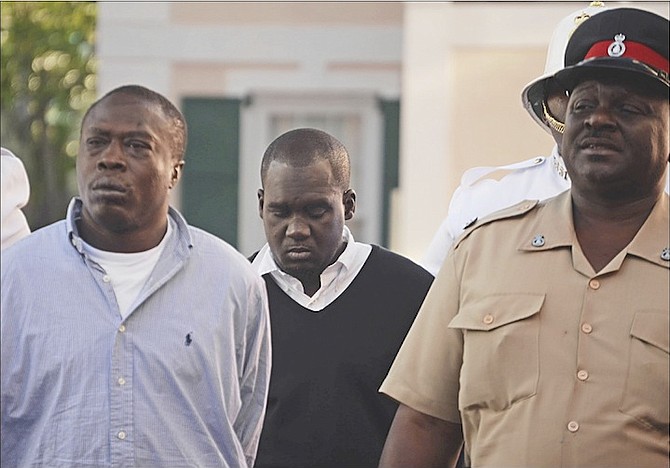 A MAN on trial for triple murder became an emotional wreck in the Supreme Court yesterday after a jury accepted the Crown’s case that he pulled the trigger of a shotgun that killed three persons, including a woman due to give birth to a baby boy.

Though the jury’s 8-4 guilty verdict for three counts of murder were not acceptable in law, they found 43-year-old Shawn Knowles guilty of manslaughter by provocation on the same count concerning the July 30, 2011, deaths of Edward Braynen, Chackara Rahming and Erica Ward.

The jury also returned a guilty verdict of 8-4 on the remaining charges of possession of ammunition and two counts of possession of unlicensed firearm. Knowles’ co-accused Timothy Saunders was also convicted of three counts of manslaughter yesterday.

After the manslaughter verdict was announced, Knowles began wailing inside the prisoner’s dock behind his lawyer Romona Farquharson-Seymour.

He repeatedly cried out that he was falsely accused and even claimed trial prosecutor Cordell Frazier hid evidence that would vindicate him and Saunders.

“I ain’t do this bey. I hope y’all could sleep at night,” Knowles said in reference to the jury.

His lawyer tried to calm him, but was unsuccessful in her attempt as Knowles became louder.

“They had all kind of witnesses, the prosecution hide them off this case,” Knowles further alleged.

Senior Justice Isaacs told Knowles that the trial was not concluded as sentencing had yet to be passed.

Mrs Farquharson-Seymour and Saunders’ lawyer, Lennox Coleby, asked the court for probation reports to be prepared to assist the court in sentencing.

The request was approved and the sentencing was adjourned to April 13.

The Crown alleged that the murders were in retaliation for the July 12, 2011 murders of Kevin Forbes and Alwayne Leslie at a Haitian village off Montgomery Avenue.

Ward was pregnant with the child of Serrano Adderley, the 30-year-old man charged with the deaths of Forbes and Leslie. Knowles is the nephew of Forbes.

On Monday, the jury listened to three hours of closing arguments from Crown and defence counsel on whether two accused men were the shooters behind the gruesome execution.

Mr Coleby told the jury that the Crown would want them to believe that two men - who only knew each other in passing but lived and associated with the victims in the same village - were responsible for the crimes.

Saunders’ alleged statement to police said both men walked to the victims’ apartment off Montgomery Avenue, shot the door open and that Knowles fatally shot the trio.

However, Mr Coleby said the Crown had not called a witness who gave a statement of hearing shots and seeing a car speeding off from the apartment.

Mr Coleby said in ignoring this, the police and Crown also failed to consider that the second victim who died with Knowles’ uncle weeks before was a Jamaican.

Mrs Farquharson-Seymour said there was no evidence - fingerprint, footprint impression or DNA - linking Knowles to the scene of the killings.

She said the police’s account of Knowles stashing two shotguns in bushes on Cowpen Road could not be believed as the blue canvas the guns were reportedly wrapped in had not been exhibited in court or analysed for fingerprints or DNA. She also noted that with the discrepancies with the handling of the weapons, one had to question whether the firearms presented in court were the same ones that were allegedly recovered by police on July 31, 2011.

Knowles’ lawyer also said detectives’ accounts of her client’s injuries in police custody did not make sense. She said they heard the testimony of the prison physician Dr Heastings Johnson who read the medical report of her client and noted the complaints made.

In response, Ms Frazier argued that DNA evidence was not needed for the firearm, which police saw Knowles put in the bushes. She also informed the jury that a firearms examiner said that the spent shells found at the crime scene matched the ones found in the shotguns Knowles had stashed prior to his arrest.

She argued her scepticism that police would beat someone to give a statement that did not have him confessing to anything if Saunders’ claims were to be believed.

She also said that Saunders had been aware of what would happen a week in advance of the incident and had gone along with Knowles, who sought to exact revenge for almost being killed by Ward’s boyfriend.

During his summation of the evidence and direction to the jury on the law, Senior Justice Isaacs left the option of manslaughter to the jury if they did not accept that the killings were intentional and were provoked by the incident that occurred two weeks prior.