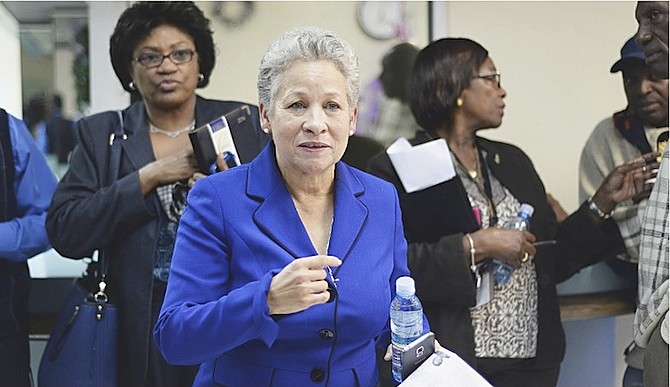 Glenys Hanna-Martin, Minister of Transport and Aviation, held a meeting with jet ski operators yesterday about the US alert.

JET Ski operators yesterday vowed to do “whatever it takes” to prevent unlicensed persons from conducting business on public beaches.

Speaking with The Tribune after a nearly three hour long meeting with Transport Minister Glenys Hanna Martin and representatives from the Port Authority and Royal Bahamas Defence Force, several of the operators said they have “had enough” of a few “bad apples” ruining their livelihoods.

Their comments came one day after the United States Embassy in Nassau said it has “prohibited” its employees from using Jet Ski rentals in New Providence, saying the water sports industry is “minimally regulated”.

Days after an American woman was allegedly raped by a man riding a Jet Ski at Cabbage Beach, the embassy also advised American citizens not to patronize Jet Ski operators in this country as it also warned US citizens living in or travelling to the Bahamas to “be aware of their surroundings and remain on heightened alert to avoid being victims of crime”.

Mrs Hanna Martin has stressed that the alleged attacker in the latest incident was not a licensed Jet Ski operator, nor was he a part of the industry.

Patrick Glinton, president of Glinton Watersports, said licensed operators are “ready to take this to the next level” and remove “whomever needs to be removed from the beach at any cost.”

“We let them slide in the past because we knew them personally, but now we see what is happening we are going to have to take the bull by the horns and make it happen for us.

“They say it’s a public beach and we can’t tell them what to do, but now this is affecting our business and I am taking no beating for no other man. I will do what we have to do to protect my business. We are taking a stand,” he added.

Sean Lewis, owner of Lewis Watersports, said he doesn’t blame the US Embassy for issuing the advisory and urged the government to “properly regulate the industry.”

“I cannot get mad at the embassy for protecting their people. The government now needs to step in and deal with crime and get some boats in the water to man the water. They have people on the land, but not in the water. I feel like this meeting is fresh wind, the government said some things and they said they will implement them immediately and we can’t wait to see these things in place, once that happens this industry will get better. These persons who are not licensed to be on the beach need to go. If they are not licensed they will be escorted off the beach, they are doing things and we are being blamed, so we will have to find a way to remove them.”

“We have determined to come together and look at the issues and see what the recommendations are and form a committee then we will come back and see how we can fix the issues,” Mrs Hanna Martin said.

“The one thing that is clear is that a collaboration between the agencies is needed. So we had the defence force in the meeting and I spoke with the minister of national security to have the police involved. We will create an environment that makes it very difficult for someone to go in a contrary way, so if they are on the beach with a Jet Ski and they are not supposed to be there, it will be fixed.”

Typical PLP, only act when the s$%^ hits the fan. When will we become a proactive culture instead of a reactive one? The Minister is a joke.

Yep we need an active Government instead of a reactive one!

bey they ein even good at reacting, all they know how to do is throw up smoke and mirrors

so in a couple days the PLP has done what they couldn't do since the 80's? really i ain't holding my breath on this one I say let the legal operators enforce it themselves = nassau getting like the family islands if you don't do it yourself it ain't gonna get done

The jet ski's need policing in the worst possible way. It is well known that a few sell drugs and it is also well known that a few molest women. they also ride like complete idiots, close to other boats, the shore and docks at breakneck speed. Their machines are not well kept, I know as I have towed a number of tourist in to the beach after they have broken down. The entire industry is just shady!

"Mrs. Hanna Martin said her ministry has now formed a committee comprised of licensed water sports operators to fix the problems plaguing the industry." Stop delegating lazy woman and put policies in place for the operators. Jezuz! You mean to tell me that this wutless government cannot get an enforcement team, made up of defenses force officers to police these guys? How the hell can you leave it up to the watersports association to deal with this problem. Next thing you will have vigilantes trying to resolve the problem on their own and even worst Bahamians fighting with each other in front of tourists. I mean...This woman is the worst! She should never, ever run for public office again! She certainly doesn't have any traits from her father or mother.

These machines must be banned. I would like an AK47 but I am not allowed to. Give owners 180 days to get rid of them and never allow them into the country.

And we should have an overwhelmingly popular revolution to remove them.

In 2012, DNA managed to siphon off enough votes to give the PLP a 29/9 victory. IF you take all the DNA votes and put them in the FNM column (lets be honest, ain't no PLP voting for DNA) IF all those votes went to FNM, the result would have been FNM 24 - PLP 14. If Bran runs a full slate in the next election (38 candidates) then PGC gets an easy win. PLP FOREVER....get used to it!

Maybe we needs to go to Spanish Wells, North Abaco or long Island to recruit jet ski operators. Then that will solve the problem.. Maybe Ed fields can tell the nation how many of his staff has been assaulted by visitors: spit on, slapped, kicked and other wise physically assaulted. And how many property damage has been done. Do they seek to ban these people from Atlantis, or Paradise Island or the Bahamas? where is uncle Tom? Then lets talk about the carnival Ed fields is administratively active in importing to the Bahamas. Carnivals are know to attract pimps, prostitutes, pick pockets drug heads, perverts and parasites. We have our problems in the Bahamas, yes but we don't need to castigate every Bahamian and deem them unfit to interact with the world.

You have a point but the problem with this type of reasoning is, it has no weight. "life isn't fair", a friend said that to me long ago when I complained about bias on the job, "if you start off with that premise you will do better". Don't expect the Americans to treat us "fairly" it will never happen. Just do better so they have nothing to say.

Exactly my point, life isn't fair and sometimes it's downright ugly. Your reaction to it is altogether something else

AMERICA is a GREAT country! But that portion of the US y'all fear so much no longer has the power they think they have. Anything you need from the US can be bought on line for 1/3 the price it costs in the US and secondly most of them who putting out the advisory and who they sending it to will never visit the Bahamad (at least in a way it benefits the country)any way. Finally what ever happened to "innocent until proven guilty"? One claim against a young Bahamian makes Erry other negro a dudpect? Pee on that!

If the US had no power, we wouldn't be discussing this story.

There's the mindset that's set us back decades. If it were happening on US soil every country would do what they did. We included! Facts man. Tourism is our bread and butter and this nonsense been ;happening for far too long! And when we start growing our own food, have cattle, produce milk and everything else we need then you can start yapp'n about the US. Until then you best open your eyes.

Whoever wrote the headline summed up the entire saga. "Jet Ski Operators To Take Action AFTER Alert".

The minister sending the fox into the hen house to root out his friends somehow does not make me feel all warm and fuzzy.

There is no way for anyone to know a "licensed" jet ski from one not licensed. My God we can't even identify vehicles on the road. Nor is anything ever done about the unlicensed one if found by accident. If people with licensed guns wandered around town with them how would anyone know except they show the stamp on the license and you compare the serial number on the gun and certificate. These craft have got to be outlawed. They are impossible to police.