Police And Family Devastated As Body Of Missing Officer Found 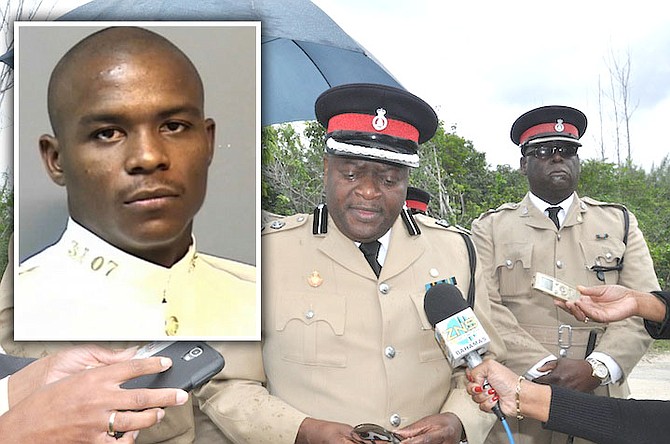 An emotional Emrick Seymour, Senior Assistant Commissioner of Police, speaks to the media at the scene where Cpl Munnings’ (inset) body was found. Photo: Vandyke Hepburn/BIS

THE body of a missing Grand Bahama police officer was discovered on Thursday afternoon in the area of the North Star Resort on Fortune Bay Drive, Freeport, leaving police officers and family members devastated.

Corporal Jamal Freddie Munnings, 33, of West Pioneers Way, was found dead around midday in bushes off the quiet, upscale subdivision of Fortune Bay. The husband and father had been missing since Tuesday and was last seen driving his Nissan Frontier Truck. Concerns were raised after he failed to report to work at 8.30am that day.

The police said they are determined to find out what happened to the officer, who was attached to the Fire Branch and had been with the force for 11 years.

Senior Assistant Commissioner of Police Emrick Seymour, officer in charge of the Grand Bahama District, said that Cpl Munning's truck was initially discovered in a canal, and his body was found some distance away a short time later.

It was not the kind of outcome they had expected, he said.

When asked whether there were any signs of injury to the body, ACP Seymour said it was still very early to determine at that stage but did add that the officer was not in police uniform and was wearing civilian clothing at the time of his death.

“Our search ended around midday when we discovered the officer’s truck in the canal just behind me, and shortly thereafter we discovered his body. We are all distraught," he told reporters at the scene. “We don’t know the circumstances of the death and how he came by his demise and so the investigation is underway to make that determination."

An emotional ACP Seymour described Cpl Munnings as a very “industrious” officer, who was married and had a young daughter. “I am full of emotions. I remember when he was promoted two years ago. He was an industrious, hardworking and determined young officer.

“He was filled with gratitude when he was promoted and he never missed a time when he came to headquarters to pay me a compliment and to say how grateful he was, and that’s why it is so hard for me personally.

In May 2014, businessman Cedric Hepburn, 40, was gunned down in the area of the North Star Resort. Mr Hepburn was out on his routine walk when he was shot multiple times and died at the scene. His murder remains unsolved.

First, and as much, my heartfelt condolences goes out to the wife, children and family of this Officer of the law; then to the entire Royal Bahamas Police Force. May your soul, indeed, rest in peace. Amen.

And to the common man and families in The Bahamas... we ALL are in this together and it is now not only us who are paying the heavy price, but some of them too...

I concur with Pastor Rex Major comments that he made in the aftermath of the assault on his house and family. This is an outcome of our society promoting and uplifting criminals and their deeds.

Persons to become Vatican Saints are made to undergo strenuous examination which can sometimes extend over hundreds of years. However, in The Bahamas, Mr. Craig Flowers went from an un-repenting, un-remorseful 'criminal got red-handed' to a 'Saint' over night, thanks to Justices who made that decision in the Court of Appeal case of Mr. Flowers' criminal trial.

Then, the Chairperson, and pivotal decision maker on the Appeal Panel, goes on to be recommended and knighted a 'Dame' for her contribution to the Judiciary. True to the slogan, "EVERYONE"S A WINNER"... Just now I remembered a movie that came out back in the mid-seventies starring Sidney Poitier, Bill Cosby and I think, Richard Pryor, 'LET'S DO IT AGAIN'.

Oh LORD, Our God... if this their action comes before you as a sweet smelling fragrance, then I ask that you receive it and bless them further in their deeds. But if it is not, please show forth yourself and the standard of righteousness by which you want your People in The Bahamas to live by. Otherwise, we are confused and those that commit these atrocities seem to be justified. For it seems that there is one set of laws for them, and another set of laws for us. Amen?

I feel your sentiments deeply Godson, but remember this God of ours was praying for the sinners as they nailed him to the cross.... He ein coming down to Nassau with fire and judgement any time soon. He gone buck these fools later on down the line when they stumble into his office, and respectfully put them in their place..... be it hell or where ever.....