What Has Bimini Cruise Ship Cost The Bahamas, Asks Turnquest 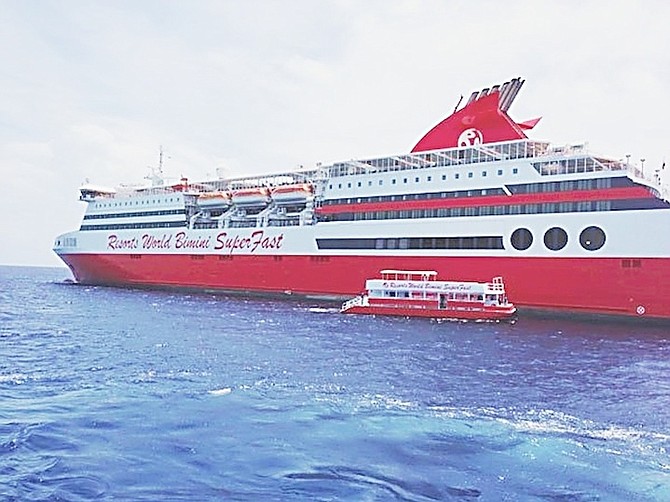 In a statement released yesterday, Mr Turnquest said while Tourism Minister Obie Wilchcombe’s reaction to the resort’s announcement can be viewed as understandable, it could never justify the environmental damage to Bimini.

He also said the country now deserves to know “what has the Bimini cruise ship cost the Bahamian taxpayer and the people of Bimini”.

He noted that the government, in the face of vast opposition and ample warnings, forged ahead with the resort’s plans for a cruise port often insisting that the financial rewards would outweigh concerns raised.

Mr Turnquest pointed to the concern raised by the Save the Bays environmental group, insisting that the group warned the government and resort that actions taken would result in major environmental setbacks.

He also said the model attempted by Resorts World Bimini (RWB) was not new, explaining that the scheme had been attempted before in Nassau resulting in similar failed results.

Mr Turnquest said the Christie administration opted to go ahead with plans for the resort despite the tide of practical facts condemning the project.

“This ferry service, which was launched against the best advice of local and international partners, has blown up in the face of this PLP government and like (Cable Beach resort) Baha Mar, is tangible evidence that the PLP is out of its depth in managing these projects and paying attention to their progress,” he said.

On Tuesday, Mr Wilchcombe told Guardian Business that RWB’s SuperFast cruise ship, which brought passengers from Florida to the resort, had “caused many trips to be cancelled and of course they lost money as a result.” He said the resort wants to replace the current cruise ship with a smaller model.

Meanwhile, Mr Turnquest asked how much did the government contribute to the acquisition of the Bimini Fast Ferry and if the government gave the property or its affiliates any financial subsidies.

He said he also wants to know if the government gave RWB, Bimini SuperFast or any of its affiliates tax concessions to facilitate or support its operations and if so, how much since its inception.

The East Grand Bahama MP also questioned if the government provided consultants to the RWB project, and if so, how much were they paid.

“Resorts World Bimini has announced several sea plane and two daily flights to Bimini from Florida to replace the SuperFast,” he said. “What is the carrying capacity of these aircraft and what is the frequency of that service? Is the government of the Bahamas subsidising this new airlift and if so, how much is the commitment, for how long and how much has been spent to date? Are any Bahamian airlines involved in the programme, if one exists? How many Bahamian employees will be affected by the discontinuation of the SuperFast?”

RWB completed the first phase of its cruise port in September 2014, despite significant pushback from environmentalists.

Last Friday, RWB announced that it would end its SuperFast ferry service this week as a part of a new multi-tiered “improved transportation initiative.”

The new ‘Break for Bimini’ initiative will reintroduce daily, non-stop commercial air services from mainland Florida to Bimini, in addition to incorporating a jetty recently completed by the resort.

Commercial flight services being provided by Cape Air, Silver Airways and a luxury flight service offered by the resort are expected to transport roughly 500 guests to Bimini on a weekly basis.

All you need to know: "Mr Turnquest said the Christie administration opted to go ahead with plans for the resort despite the tide of practical facts condemning the project."

Thank pretty much sums up everything this gov't does. It only makes sense that they had something personally (financially) to gain by approving it, otherwise it's the definition of insanity: "Doing the same thing over and over and expecting a different result."

There a deal on to begin a ferry service now into Cuba... saw it on Yahoo news. Any wonder these two seems to coincide with the Principal in the Bimini ventures also holding strong ties and investment in Cuba? Ouch... even prostitutes are treated better...