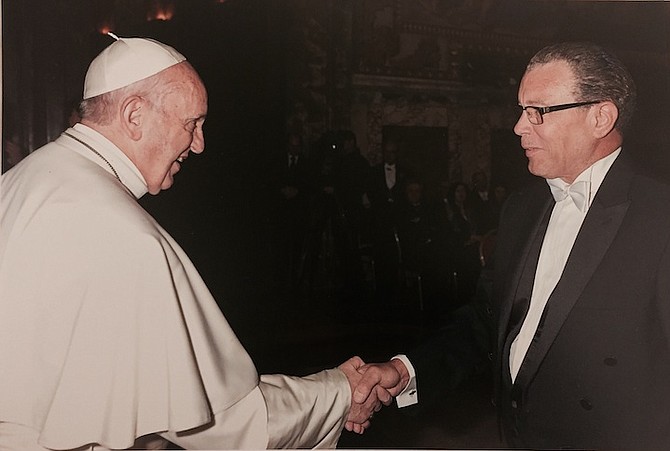 Pope Francis greets Sean McWeeney, QC, at the Vatican at his reception for the world’s diplomatic corps on Monday.

SEAN McWeeney QC, the Bahamas non-resident Ambassador to the Holy See, attended the Pope’s annual keynote address to the diplomatic corps in Rome this week, at which the primary focus was the issue of migration.

In a lengthy and deeply considered address, Pope Francis told the assembled ambassadors that he was aware of the immense challenges imposed by large-scale illegal migration, including concerns over changes in the social and cultural structures of receiving states. However, in the midst of such challenges, he stressed that “there should be no loss of the values and principles of humanity, mutual subsidiarity and solidarity, however much they may prove, in some moments of history, a burden difficult to bear”.

Pope Francis insisted that Europe has the means to welcome refugees without compromising its security or culture, saying the continent bears the “moral responsibility” to care for others who have fled their homes to seek a better life. He lamented the distinction made between refugees fleeing conflict and persecution and migrants escaping poverty, saying both deserve international protection.

Human history has been marked by great waves of migration, he told the ambassadors from the 180 nations that have diplomatic relations with the Holy See. Humanity today must not let security fears replace the principles of respecting the dignity of others, he said.

“Europe has the means to defend the centrality of the human person and to find the right balance between its twofold moral responsibility to protect the rights of its citizens and to ensure assistance and acceptance to migrants,” Pope Francis said.

He called for a frank and respectful dialogue to begin among countries of migrants’ origin, transit and reception “so that with greater boldness and creativity, new and sustainable solutions can be sought”.

The Pope has made migration the top priority of his pontificate: his first trip outside Rome as pope was to the Italian island of Lampedusa, where he celebrated mass in honour of the thousands of people who have died crossing the Mediterranean and denounced the “globalisation of indifference” that the world had shown to people fleeing their homes for better lives abroad.

On subsequent trips, he has visited refugee camps, while closer to home he has opened the Vatican’s doors to two refugee families and called on parishes around the world to do the same.

The Pope devoted nearly his entire speech on Monday to the issue, showing the importance it has in the Holy See’s foreign policy under the first Latin American pope, who ministered to Paraguayan migrants in the slums of Buenos Aires before his election.

He acknowledged fears about security in the wake of extremist attacks in Europe, Asia and elsewhere. But he said those fears should not result in Europe losing its values of solidarity and humanity.

“Human history is made up of countless migrations, sometimes out of an awareness of the right to choose freely, and often dictated by external circumstances,” he said. Citing Biblical accounts, Pope Francis said today’s migrants are “possessed of the same determination which Moses had to reach a land flowing with milk and honey”.

Mr McWeeney was accompanied to the Vatican by his wife, Cyprianna, and Ministry of Foreign Affairs official, Joy Newbold.

I hope the pope's morale and ethos is rubbing off. Did they discuss the constitutional referendum about gender equality? treatment of refugees, foreigners? basic human rights for the sick, disabled, outcast in the Bahamian society? Corruption? Environment? I am glad, finally we are on the path to salvation. I bet the picture with the Pope will be sitting on the Hon. Amb.'s Desk as a lawyer starting next Monday.

Good versus Evil; the Almighty meets the Devil!

How absolutely GROTESQUE ! But even Christ suffered sinners and worse U guess !

I wonder if one who is traveling the world on taxpayer money ever stops to think about the taxpayer who is probably hungry and cold. Are they getting value for their money? Could that money be put to better use and benefit more people?

Oh my Comrade Thomas, how rights you always be's.
Time for a we Comrades mount a revelation if only to demand the full public disclosure what it really cost taxpayers fund our diplomatic missions abroad.
Likes I keeps saying, even while people are going bed hungry, lose their home, cars and paychecks, still why in hell would i even bother with making this stuff up when a single photo does tells the entire story without my creativity input.
The real scary thing is this is not about singling out one political party over the other. It is about a broken colonial system we the people seem to forever want hold onto.

That is a friggin disgrace - No shame in any of them.

I'm surprised that there wasn't any smoke, or fire and brimstone and such when the Pope touched him.